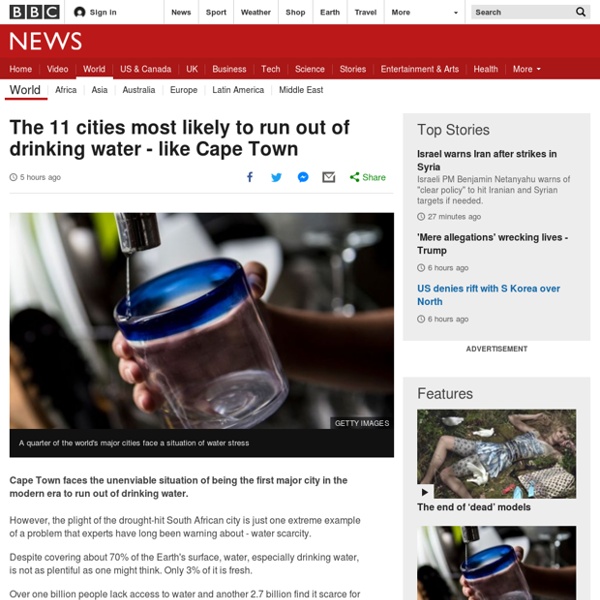 Image copyright Getty Images Cape Town faces the unenviable situation of being the first major city in the modern era to run out of drinking water. However, the plight of the drought-hit South African city is just one extreme example of a problem that experts have long been warning about - water scarcity. Despite covering about 70% of the Earth's surface, water, especially drinking water, is not as plentiful as one might think. Only 3% of it is fresh. Over one billion people lack access to water and another 2.7 billion find it scarce for at least one month of the year. According to UN-endorsed projections, global demand for fresh water will exceed supply by 40% in 2030, thanks to a combination of climate change, human action and population growth. It shouldn't be a surprise, then, that Cape Town is just the tip of the iceberg. 1. At the height of the crisis, the city of over 21.7 million inhabitants had less than 20 days of water supply and police had to escort water trucks to stop looting.

Related:  Water Scarcity • What the Hell

How the water industry is going digital to boost efficiency Water scarcity is a problem worldwide—but improved water-supply networks are starting to make a dent in the problem. Water scarcity is undoubtedly one of the key issues facing the world today. Research published last year in Science Advances concluded that four billion people worldwide (two-thirds of the global population) are affected by severe water scarcity for at least one month of the year.

Graphene filter made out of soybeans makes water from Sydney Harbor drinkable Imagine if you could create clean water from any source – no matter how dirty – in just one step. Australian scientists have managed to do just that with a new filter made from soybean-based graphene film. It’s so effective that it can make even the filthiest water drinkable – and it’s simpler, cheaper and more environmentally-friendly than other methods out there. The filter, called Graphair, is made from a graphene film with microscopic channels that trap pollutants while letting clean water through. Why Silicon Valley billionaires are prepping for the apocalypse in New Zealand If you’re interested in the end of the world, you’re interested in New Zealand. If you’re interested in how our current cultural anxieties – climate catastrophe, decline of transatlantic political orders, resurgent nuclear terror – manifest themselves in apocalyptic visions, you’re interested in the place occupied by this distant archipelago of apparent peace and stability against the roiling unease of the day. If you’re interested in the end of the world, you would have been interested, soon after Donald Trump’s election as US president, to read a New York Times headline stating that Peter Thiel, the billionaire venture capitalist who co-founded PayPal and was an early investor in Facebook, considered New Zealand to be “the Future”.

South Africa's water crisis spreads from Cape Town The next crisis may lurk in the mountains of Lesotho, a land-locked mountain kingdom encircled by South Africa * Mountain kingdom is key water source for South Africa * Lesotho dams near historic lows, rains have been poor * Experts say Lesotho water should be stored * Government says it needs the water now By Ed Stoddard and Victor Antonie Media Giant Sinclair Hired Reporter From Russian Propaganda Outlet RT Who Produced ‘Must-Run’ ‘Deep State’ Segment The United States' largest owner of television stations, Sinclair Broadcast Group, mandated that its outlets run a segment on the so-called deep state that was produced by a former reporter for the Russian propaganda outlet RT, according to a new report. The "must-run" piece aired on March 21 and featured Sebastian Gorka, the former adviser to President Donald Trump, lamenting the existence of a deep state—a popular conspiracy theory in some circles that longtime career public servants in the government are working to subvert the U.S. government. Trump has repeatedly complained about such a mysterious rogue network. Sinclair national correspondent Kristine Frazao produced the segment. Before joining Sinclair in 2013, she was an anchor/correspondent at RT, formerly Russia Today, for more than three years, according to her LinkedIn page.

Our brains rapidly and automatically process opinions we agree with as if they are facts By Christian Jarrett In a post-truth world of alternative facts, there is understandable interest in the psychology behind why people are generally so wedded to their opinions and why it is so difficult to change minds. We already know a lot about the deliberate mental processes that people engage in to protect their world view, from seeking out confirmatory evidence (the “confirmation bias“) to questioning the methods used to marshal contradictory evidence (the scientific impotence excuse). Now a team led by Anat Maril at the Hebrew University of Jerusalem report in Social Psychological and Personality Science that they have found evidence of rapid and involuntarily mental processes that kick-in whenever we encounter opinions we agree with, similar to the processes previously described for how we respond to basic facts. Now, across four studies, Maril and her team have found that something similar occurs for opinions.

Sacred, life-affirming and fast disappearing: waters of the Himalayas – in pictures In the small towns and villages of the Himalayas across India and Nepal, communities depend on surface water from glacier-fed rivers, springs, ponds and lakes for domestic use and for agriculture. Yet this is a region at the forefront of global climate change. Glaciers are shrinking quickly, particularly in the eastern and central Himalayas, which is likely to significantly reduce flows of water downstream. Intensive land uses such as logging and stone quarrying, combined with urbanisation and a rise in tourism, are all putting immense pressure on the region’s water supply. Left, steel pipelines lie stockpiled in a farmer’s field, in Kushadevi, Nepal, with a stone quarry visible behind it; right, a quarry near Dhulikhel

Weedkiller found in granola and crackers, internal FDA emails show US government scientists have detected a weedkiller linked to cancer in an array of commonly consumed foods, emails obtained through a freedom of information request show. The Food and Drug Administration (FDA) has been testing food samples for residues of glyphosate, the active ingredient in hundreds of widely used herbicide products, for two years, but has not yet released any official results. But the internal documents obtained by the Guardian show the FDA has had trouble finding any food that does not carry traces of the pesticide. “I have brought wheat crackers, granola cereal and corn meal from home and there’s a fair amount in all of them,” FDA chemist Richard Thompson wrote to colleagues in an email last year regarding glyphosate. Thompson, who is based in an FDA regional laboratory in Arkansas, wrote that broccoli was the only food he had “on hand” that he found to be glyphosate-free. “People care about what contaminants are in their food.

The Nomad Pavilion is a woven goat hair desert shelter that collects its own water Architects Dina Haddadin and Rasem Kamal have teamed up to create the Nomad Pavilion, an innovative structure that serves as both a desert shelter and a water tower. Inspired by indigenous Bedouin tents, the pavilion uses multiple layers of tightly-woven goat hair to insulate the structure from the harsh desert climate. A water collection cone at the top of the shelter collects dew and fog to fill the underground water tank. The hybrid shelter and water tower is made from 96 Corten steel rods and knotted ropes. Inspired by the national flower of Jordan, the Black Iris, the shelter boasts an intricate geometric formation. The steel rods rise from the circular base and slope inward.

Republican House Members Think a $450K Salary is Middle Class That's rich! Republicans suddenly believe that one percenters are barely struggling to be in the middle class, party officials revealed. On Thursday, House Republicans issued a fact sheet about their new tax cut plan that referred to Americans earning $450,000 a year as “low- and middle-income” — even though that income level would put those taxpayers in the top 0.05% of all individual Americans. Cheap, simple technique turns seawater into drinking water​ Researchers from the University of Alexandria have developed a cheaper, simpler and potentially cleaner way to turn seawater into drinking water than conventional methods. This could have a huge impact on rural areas of the Middle East and North Africa, where access to clean water is a pressing issue if social stability and economic development is to improve. Right now, desalinating seawater is the only viable way to provide water to growing populations, and large desalination plants are now a fact of life in Egypt and other Middle Eastern countries. Most of these plants rely on a multi-step process based on reverse osmosis, which requires expensive infrastructure and large amounts of electricity. These plants release large quantities of highly concentrated salt water and other pollutants back into the seas and oceans as part of the desalination process, creating problems for marine environments.

How the mega-rich are preparing for the apocalyse - CNN Style Written by Elizabeth Stamp, CNN Say "doomsday bunker" and most people would imagine a concrete room filled with cots and canned goods. The threat of global annihilation may feel as present as it did during the Cold War, but today's high-security shelters could not be more different from their 20th-century counterparts. A number of companies around the world are meeting a growing demand for structures that protect from any risk, whether it's a global pandemic, an asteroid, or World War III -- while also delivering luxurious amenities.