War on the wildest places: US bill may open pristine lands to development 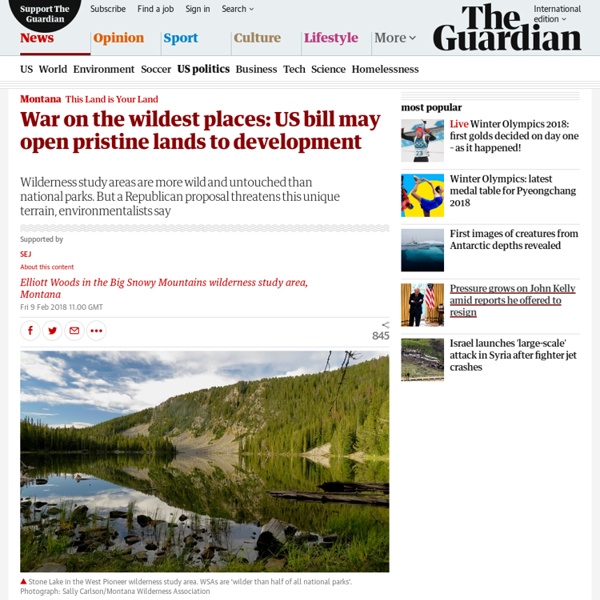 The Big Snowy Mountains wilderness study area in Montana represents 91,000 acres of the wildest land left in America. Viewed from a limestone bluff high in a timbered gulch, no houses are visible. No transmission lines or roads interrupting the expanse of green. No smoke curling up from cabin stovepipes. But all that could change in the near future. If a US senator’s bill passes, this tranquility could be shattered by the buzz of snowmobiles or the roar of excavators. In early December, Senator Steve Daines, a Republican, introduced a bill that would eliminate wilderness protection from the Big Snowies as well as from another 358,500 acres in Montana that have been shielded from development since the 1970s. The five landscapes in Daines’s bill represent over a third of the wilderness study acreage on US national forests, and their loss would mark the biggest reduction of protected public lands in Montana history. So what is on the chopping block? “What are you doing over there, Cruz?”

Climate change will displace millions Wildfires tearing across Southern California have forced thousands of residents to evacuate from their homes. Even more people fled ahead of the hurricanes that slammed into Texas and Florida earlier this year, jamming highways and filling hotels. A viral social media post showed a flight-radar picture of people trying to escape Florida and posed a provocative question: What if the adjoining states were countries and didn’t grant escaping migrants refuge? By the middle of this century, experts estimate that climate change is likely to displace between 150 and 300 million people. If this group formed a country, it would be the fourth-largest in the world, with a population nearly as large as that of the United States. Yet neither individual countries nor the global community are completely prepared to support a whole new class of “climate migrants.”

World’s great forests could lose half of all wildlife as planet warms – report The world’s greatest forests could lose more than half of their plant species by the end of the century unless nations ramp up efforts to tackle climate change, according to a new report on the impacts of global warming on biodiversity hotspots. Mammals, amphibians, reptiles and birds are also likely to disappear on a catastrophic scale in the Amazon and other naturally rich ecosysterms in Africa, Asia, North America and Australia if temperatures rise by more than 1.5C, concludes the study by WWF, the University of East Anglia and the James Cook University. The research in the journal Climate Change examined the impact of three different levels of warming – 2C (the upper target in the 2015 Paris agreement), 3.2C (the likely rise given existing national commitments) and 4.5C (the forecast outcome if emissions trends remain unchanged) on nearly 80,000 plant and animal species in 35 of the world’s most biodiverse regions.

How Segregation Shapes Fatal Police Violence : Code Switch The family of Dontre Hamilton marked a spot in red paint to memorialize where he was shot by a Milwaukee police officer. Carrie Antlfinger/AP hide caption toggle caption Refusing to act on climate change will cost future generations $530 trillion (at least) - Techly By continuing to delay significant reductions in greenhouse gas emissions, we risk handing young people alive today a bill of up to US$535 trillion. This would be the cost of the “negative emissions” technologies required to remove CO₂ from the air in order to avoid dangerous climate change. These are the main findings of new research published in Earth System Dynamics, conducted by an international team led by US climate scientist James Hansen, previously the director of NASA’s Goddard Institute for Space Studies.

The tragic story of America's only native parrot, now extinct for 100 years It was winter in upstate New York in 1780 in a rural town called Schoharie, home to the deeply religious Palatine Germans. Suddenly, a flock of gregarious red and green birds flew into town, seemingly upon a whirlwind. The townspeople thought the end of the world was upon them. Though the robin-sized birds left quickly, their appearance was forever imprinted on local lore.

Ghana's Illegal Galamsey Gold Mining Affecting Cocoa Farmers, Chocolate Supply Obuasi, GhanaKwaku Asare grabbed his machete and trekked through the bush to his cocoa farm—through winding pathways and hills, past ominous pits of muddy water, and underneath the low-hanging canopy of dried cocoa leaves. But the trees were bare. A few rotting cocoa pods littered the ground, while other stunted pods refused to ripen on the branches. “When the Chinese came, they told me that my plants were not yielding anymore because there was so much gold under the soil,” Asare said. After a few years of low production, he sold his 14 acres to a group of small-scale gold miners, also called galamsey miners, with a Chinese sponsor. Plummeting insect numbers 'threaten collapse of nature' The world’s insects are hurtling down the path to extinction, threatening a “catastrophic collapse of nature’s ecosystems”, according to the first global scientific review. More than 40% of insect species are declining and a third are endangered, the analysis found. The rate of extinction is eight times faster than that of mammals, birds and reptiles. The total mass of insects is falling by a precipitous 2.5% a year, according to the best data available, suggesting they could vanish within a century. The planet is at the start of a sixth mass extinction in its history, with huge losses already reported in larger animals that are easier to study.

Growing Up Surrounded by Books Has a Lasting Positive Effect on the Brain, Says a New Scientific Study Image by George Redgrave, via Flickr Commons Somewhere in the annals of the internet--if this sprawling, near-sentient thing we call the internet actually has annals--there is a fine, fine quote by filmmaker John Waters: We need to make books cool again. If you go home with somebody and they don’t have books, don’t fuck them. Humpback whales stop their song when human vessels make noise Scientists have found yet another way we’re disrupting wildlife: when cargo ships start producing a lot of noise, humpback whales reduce or even stop their singing. Image credits: Christopher Michel. Not only do whales (and other marine mammals) use sounds to communicate, but they’re much more dependent on sounds than land creatures because their other senses are so limited in water. For human ships, meanwhile, sounds are more of a side-effect. When a ship cuts through the water, its engine working at full power, it’s a huge cacophony of sounds — and in our modern world, there are a lot of ships. A team of Japanese researchers wanted to see how these ship sounds affect whales.

The World’s Water Crisis Explained on World Water Day “Day Zero,” when at least a million homes in the city of Cape Town, South Africa, will no longer have any running water, was originally scheduled for April. It was recently moved to July. The three-year long drought hasn’t ended, but severe water rationing—limiting people to a mere 13 gallons (50 litres) per person per day—has made a difference.