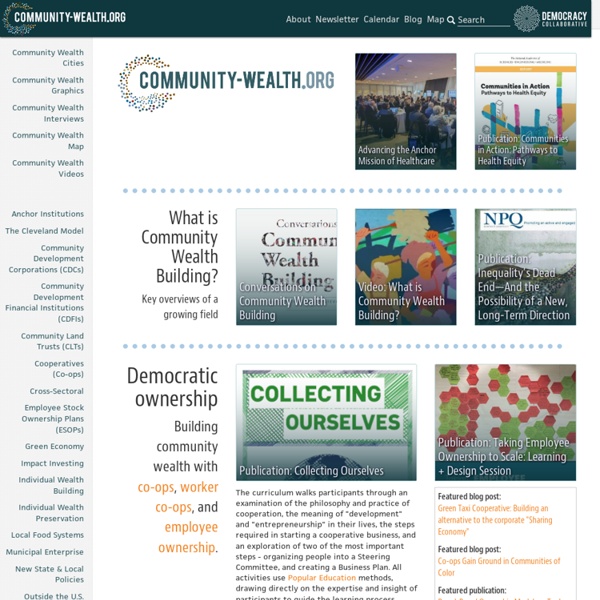 Related:  "Resistance is futile, you will be assimilated." So what?

Buddhist Economics: How to Start Prioritizing People Over Products and Creativity Over Consumption By Maria Popova Much has been said about the difference between money and wealth and how we, as individuals, can make more of the latter, but the divergence between the two is arguably even more important the larger scale of nations and the global economy. What does it really mean to create wealth for people — for humanity — as opposed to money for governments and corporations? That’s precisely what the influential German-born British economist, statistician, Rhodes Scholar, and economic theorist E. F. One of the most compelling essays in the book, titled “Buddhist Economics,” applies spiritual principles and moral purpose to the question of wealth. “Right Livelihood” is one of the requirements of the Buddha’s Noble Eightfold Path. Traditional Western economics, Schumacher argues, is bedeviled by a self-righteousness of sorts that blinds us to this fact — a fundamental fallacy that considers “goods as more important than people and consumption as more important than creative activity.”

The New Totalitarianism: How American Corporations Have Made America Like the Soviet Union Photo Credit: Viajar24h.com July 15, 2012 | Like this article? Join our email list: Stay up to date with the latest headlines via email. The great power struggle of the 20th century was the competition between Soviet-style communism and "free-market" corporatism for domination of the world's resources. There's a small problem with this, though. It's not just that the corporations have taken control over our government (though that's awful enough). With tongue only somewhat in cheek, here are a few ways in which Americans are now becoming a new lumpenproletariat, subject to the whims and diktats of our new Soviet-style corporate overlords. Reduced Choice and Big-Box Censorship We see it most evidently when we go to the store. Now, every Macy's in America carries the same dozen or so lines of bland, middle-of-the-road women's clothing.

The Sangha Boat | Wake Up International An Interview with Brother Chan Phap Ho Brother Chan Phap Ho was born and raised in Stockholm, Sweden. At the age of twenty-nine, he left Sweden for India. That pilgrimage brought him to Plum Village, where he joined the monastics in 2003. In 2015, he returned to Plum Village for the winter retreat after ten years living and practicing at the Deer Park Monastery. Since 2010, he has been the Acting Abbott at Deer Park. Question: In 2009, Thay shared with the Sangha a letter you wrote to Thay. Brother Phap Ho: First of all, this may be an insight. The love for the Sangha is one aspect that protects and maintains my monkhood. Since joining the monastics, I’ve had a very clear aspiration. A second concrete practice I conveyed to Thay was that if I have doubts and want to leave the Sangha, I will not leave right away. During the North American tour in 2011 and 2013, Thay confirmed that I was the Acting Abbott of the Deer Park Monastery. Besides, we also need to mention climate injustice.

Grassroots Movements, Degrowth and ‘New Economies’ There are numerous grassroots movements and initiatives worldwide with the ambition to contribute to transformative change towards more sustainable, resilient and just societies. Many of them have a specific vision on the economy and relate to alternative visions of a ‘New Economy’. The research project TRANSIT highlights four prominent strands of new economy thinking in state-of-the-art discussions: degrowth, collaborative economy, solidarity economy, and social entrepreneurship. Taking a perspective of transformative social innovation, the study draws on case studies of 12 social innovation initiatives to analyze how these relate to new economies and to transitions toward new economic arrangements. All the networks we studied – including those not focusing on finance or economics – emphasize the need for a new economy. Different perspectives on changing the economy So we clearly see that the networks have very different narratives of change.

We Have Forgotten What the Ancient Sumerians and Babylonians, the Early Jews and Christians, the Founding Fathers and Even Napoleon Bonaparte Knew About Money Mike “Mish” Shedlock has repeatedly pointed out that we have reached “peak credit” – and there will not in our lifetimes be as much credit as we saw from 2000-2008. I noted last year: Michael Hudson is a highly-regarded economist. Mesopotamian economic thought c. 2000 BC rested on a more realistic mathematical foundation than does today’s orthodoxy. And Hudson wrote last year: Every economist who has looked at the mathematics of compound interest has pointed out that in the end, debts cannot be paid. No economy ever has been able to keep on doubling on a steady basis. Hudson calls for a debt jubilee, and points out that periodic debt jubilees were a normal part of the Sumerian, Babylonian and ancient Jewish [and Christian] cultures. That is what our money system is. The modern banking system is therefore really a debt-creation system. One thing is for sure. I also pointed out: It seems ridiculous to point this out, but sovereign debt implies sovereignty. Wisdom of the Ages - Thomas Edison

LEVEY Wallcoverings and Interior Finishes - IdeaPaint Dry Erase Finish Buy Now We exist for one simple reason: to fundamentally improve the way people work. IdeaPaint was born from this very notion, a frustration with the way ideas were shared and coworkers collaborated. How can you think big when you write small? How can you harness the collective intelligence when it's awkward to share what's inside your own head? We could see the writing on the wall. Exploration leads to discovery. IdeaPaint is proven on the walls of the world's most innovative and successful companies. IdeaPaint is more than a tool. Leave your mark™ Order a sample Link to product pages Book a presentation to learn more

The Exit from Capitalism has Already Begun However, despite many accusations of heresy, Gorz remained remarkably true in his social and economic criticism to the Marx of the Grundrisse, a book to which Jean-Marie Vincent introduced him in 1959.(1) In the words of Finn Bowring, his works of the 1980s and 1990s present “an understanding of capitalism as a system of hetero-regulation which aggressively de-civilized human beings, undermining their ability to look after themselves and meaningfully navigate through the social, economic and technological environments in a life-enhancing, self-determining way” (Bowring 2008: 53). It is this understanding that he was still developing in his last major work of socio-economic theory, L'Immatériel. Connaissance, valeur et capital (2003), which will be published next year in English translation by Seagull Press. « The question of the exit from capitalism has never been more pressing. It is posed today in a radically new way and with unprecedented urgency. Translated by Chris Turner 1. 2. 3.

Green Taxi Cooperative: Building an alternative to the corporate "Sharing Economy" The “Sharing Economy” is comprised of corporations like Uber and Airbnb—that don’t actually do much sharing. But real alternatives that build community and cooperative ownership are under development across the country—like Green Taxi Cooperative, an emerging worker-owned business in Denver, Colorado that just received the regulatory approval they need to launch the 800-driver strong cooperatively-owned and union-organized company. As Nathan Schneider and Trebor Scholz put it in “The People’s Uber: Why The Sharing Economy Must Share Ownership,” the majority of the app-based services like Uber and Lyft provide a platform for “‘collaborative consumption,’ but not of control, real accountability, or ownership.” Green Taxi Cooperative, by rooting ownership and control with the drivers themselves, is helping bring equity and sustainability to Denver’s taxi scene. Why is worker ownership so important, and why are unions increasingly interested in supporting it?

£13tn: hoard hidden from taxman by global elite | Business | The Observer A global super-rich elite has exploited gaps in cross-border tax rules to hide an extraordinary £13 trillion ($21tn) of wealth offshore – as much as the American and Japanese GDPs put together – according to research commissioned by the campaign group Tax Justice Network. James Henry, former chief economist at consultancy McKinsey and an expert on tax havens, has compiled the most detailed estimates yet of the size of the offshore economy in a new report, The Price of Offshore Revisited, released exclusively to the Observer. He shows that at least £13tn – perhaps up to £20tn – has leaked out of scores of countries into secretive jurisdictions such as Switzerland and the Cayman Islands with the help of private banks, which vie to attract the assets of so-called high net-worth individuals. Oil-rich states with an internationally mobile elite have been especially prone to watching their wealth disappear into offshore bank accounts instead of being invested at home, the research suggests.

The People’s Uber: Why The Sharing Economy Must Share Ownership | Co.Exist | ideas + impact Mayor Bill de Blasio recently discovered, during his short-lived campaign against Uber, that saying no to a popular, convenient new technology doesn't tend to win many friends—or win much at all. In just a few years, New York City's regulated yellow-taxi fleet has been outnumbered by a distant company with uncertain intentions. There are benefits to this, as well as mounting costs. But critics like Mr. De Blasio won't get very far until they have something to say yes to. Uber's ascent came in the midst of an idealistic surge of companies that dubbed themselves as being part of the "sharing economy." Companies like Uber now tend to describe what they do as the "on-demand economy" rather than "sharing." Taxi drivers in Denver and the suburbs of D.C., for instance, have set up cooperative companies and control their own hailing apps. The New York City Council has already made historic investments in developing sustainable, worker-owned businesses over the past few years.

Related:
Related:  "Resistance is futile, you will be assimilated." So what?