The Ruby Toolbox - Know Your Options! 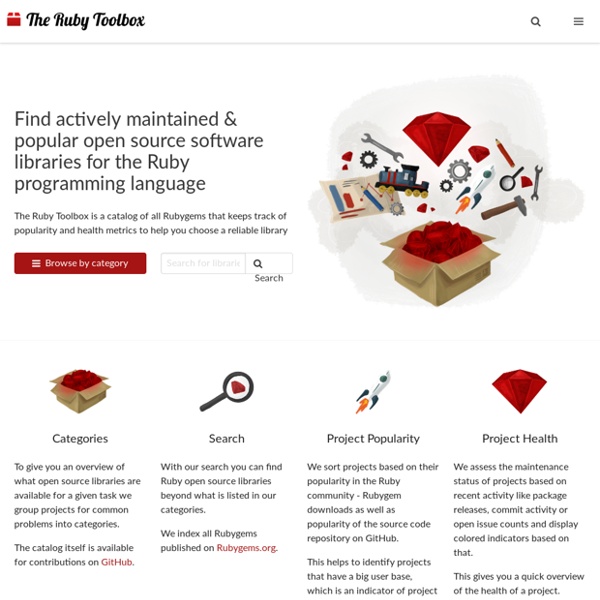 Don’' Know Metaprogramming In Ruby? Don’t Know Metaprogramming In Ruby? This guest post is by Gavin Morrice, who is a freelance Ruby/Rails developer based in Edinburgh. He likes sharing Rails tips on his site. OmniAuth: Ruby Authentication Framework What is Omniauth? The web application landscape has changed drastically in the past few years. Most users login in to dozens, sometimes hundreds of services each day; sites are no longer silos unto themselves and cannot reasonably expect users to create a unique login and password for each service. Home Hello, this is the Open Flash Chart project. Note: "Open Flash Chart 2" is LGPL. OK, Open Flash Chart 1.x was great and it works like a dream. But I made some little mistakes which over time grew and anyoyed me and made the source code weird.

Connected Educators - Homepage The Educator's Guide to Creating Connections Edited by Tom Whitby This book is every educator's guide to becoming connected through social media, blogging, personal learning networks, and even new policy. Contributors to the book include Steven Anderson, Kristen Swanson, Kyle Pace, George Couros, Pam Moran, Adam Bellow, Lisa Nielsen, and Shannon McClintock Miller. Thought leaders in Connected Education help you use real-world tips and tools to: Ruby Metaprogramming: Part I If you’re working with Ruby, chances are by now you’ve heard the word “metaprogramming” thrown around quite a lot. You may have even used metaprogramming, but not fully understood the true power or usefulness of what it can do. By the end of this article, you should have a firm grasp not only of what it is, but also what it capable of, and how you can harness one of Ruby’s “killer features” in your projects. What is “metaprogramming”?

How I Learned Enough Ruby On Rails In 12 Weeks To Launch Freelancify (Update February 26, 2013: I have since this post sold Freelancify.com to a new owner) Before I begin, I’d like to recognize Josh Crews ( for convincing me to learn Ruby on Rails; without him and his hours of volunteered mentership and help, I wouldn’t be writing this today. Thank you. I’d also like to address Please do not email me asking me to program your app for equity. Charts And Graphs: Modern Solutions - Smashing Magazine Advertisement Charts are supposed to visualize data in order to give a more profound understanding of the nature of a given problem or recent developments. Whatever type of data presentation you prefer (pie charts, bubble charts, bar graphs, network diagrams etc.), you can create charts in graphic editors manually or use special desktop-software instead. In both cases you have a major problem: once you’d like to update an old chart, or create a new one, you have to run the application and create new images over and over again. That’s not flexible.

Ruby Metaprogramming: Part II » RubySource Welcome back to Ruby Metaprogramming! In part one we looked at what Metaprogramming is and how it works; we explored deep into the internals of Ruby’s method lookup system and walked through how creating Singleton Classes fits into that mechanism. Now for the good part: applying it all. Getting Started with Node.js on Heroku/Cedar node Table of Contents This quickstart will get you going with Node.js and the Express web framework, deployed to Heroku. For general information on how to develop and architect apps for use on Heroku, see Architecting Applications for Heroku.

Four Guidelines That I Feel Have Improved My Code I have been thinking a lot about isolation, dependencies and clean code of late. I know there is a lot of disagreement with people vehemently standing in both camps. I certainly will not say either side is right or wrong, but what follows is what I feel has improved my code. I post it here to formalize some recent thoughts and, if I am lucky, get some good feedback. Must-Read Ruby Links Every programming language has a number of works you just cannot not read. Perl has the camel book, C++ has "The C++ Programming Lanugage," etc. Ruby does have it's own dead tree you cannot not read, "Programming Ruby: The Pragmatic Programmer's Guide," the so-called "pickaxe book," but that's covered so many places and recommended by everyone. Here are some links you must read in order to understand Ruby. Ruby Koans - A "koan" is a story or dialog crafted to make a student think.