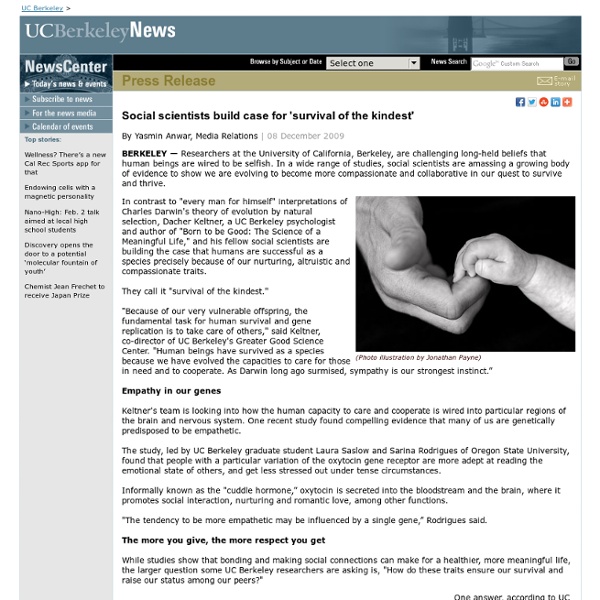 By Yasmin Anwar, Media Relations | 08 December 2009 BERKELEY — Researchers at the University of California, Berkeley, are challenging long-held beliefs that human beings are wired to be selfish. In a wide range of studies, social scientists are amassing a growing body of evidence to show we are evolving to become more compassionate and collaborative in our quest to survive and thrive. (Photo illustration by Jonathan Payne) In contrast to "every man for himself" interpretations of Charles Darwin's theory of evolution by natural selection, Dacher Keltner, a UC Berkeley psychologist and author of "Born to be Good: The Science of a Meaningful Life," and his fellow social scientists are building the case that humans are successful as a species precisely because of our nurturing, altruistic and compassionate traits. They call it "survival of the kindest." Empathy in our genes "The tendency to be more empathetic may be influenced by a single gene,” Rodrigues said. Cultivating the greater good

An afternoon nap markedly boosts the brain’s learning capacity If you see a student dozing in the library or a co-worker catching 40 winks in her cubicle, don’t roll your eyes. New research from the University of California, Berkeley, shows that an hour’s nap can dramatically boost and restore your brain power. Indeed, the findings suggest that a biphasic sleep schedule not only refreshes the mind, but can make you smarter. Students who napped (green column) did markedly better in memorizing tests than their no-nap counterparts. Conversely, the more hours we spend awake, the more sluggish our minds become, according to the findings. “Sleep not only rights the wrong of prolonged wakefulness but, at a neurocognitive level, it moves you beyond where you were before you took a nap,” said Matthew Walker, an assistant professor of psychology at UC Berkeley and the lead investigator of these studies. In the recent UC Berkeley sleep study, 39 healthy young adults were divided into two groups — nap and no-nap.

How did life originate? How did life originate? Living things (even ancient organisms like bacteria) are enormously complex. However, all this complexity did not leap fully-formed from the primordial soup. Instead life almost certainly originated in a series of small steps, each building upon the complexity that evolved previously: Simple organic molecules were formed. Simple organic molecules, similar to the nucleotide shown below, are the building blocks of life and must have been involved in its origin. Multicellularity evolved.

What Does Your Body Language Say About You? How To Read Signs and Recognize Gestures - Jinxi Boo - Jinxi Boo Art by LaetitziaAs we all know, communication is essential in society. Advancements in technology have transformed the way that we correspond with others in the modern world. Because of the constant buzz in our technological world, it's easy to forget how important communicating face-to-face is. Body language is truly a language of its own. 10% from what the person actually says40% from the tone and speed of voice50% is from their body language. Lowering one's head can signal a lack of confidence. Pushing back one's shoulders can demonstrate power and courageOpen arms means one is comfortable with being approached and willing to talk/communicate The lowering of the eyes can convey fear, guilt or submissionLowered eyebrows and squinted eyes illustrate an attempt at understanding what is being said or going onA lack of confidence or apprehensiveness can be displayed when you don't look another person in the eyesOne tends to blink more often if nervous or trying to evaluate someone else

This Device Provides Clean Water for Pennies a Day Photo: WaterconePassive Solar One Step Water Condensation FTW!We wrote about the Watercone back in 2004, but considering how much TreeHugger's audience has grown since then, it's likely that only a handful of you were reading the site back then. I think it's time to have a second look at this very clever device that has the potential to help provide clean drinking water for millions of people who are lacking access to clean water (or if they do, maybe the access is intermittent and they could use a plan B). This could save many lives for sure. Read on for more details and a demonstration video. Photo: WaterconeStep #1: Pour salty / brackish Water into pan. Photo: WaterconeStep #2: The evaporated Water condensates in the form of droplets on the inner wall of the cone. Photo: WaterconeStep #3: By unscrewing the cap at the tip of the cone and turning the cone upside down, one can empty the potable Water gathered in the trough directly into a drinking device.

Lojong Lojong (Tib. བློ་སྦྱོང་,Wylie: blo sbyong) is a mind training practice in the Tibetan Buddhist tradition based on a set of aphorisms formulated in Tibet in the 12th century by Geshe Chekhawa. The practice involves refining and purifying one's motivations and attitudes. The fifty-nine or so slogans that form the root text of the mind training practice are designed as a set of antidotes to undesired mental habits that cause suffering. Prominent teachers who have popularized this practice in the West include Pema Chodron,[1] Ken McLeod, Alan Wallace, Chogyam Trungpa, Sogyal Rinpoche, Geshe Kelsang Gyatso, and the 14th Dalai Lama.[2] History of the practice[edit] Atiśa journeyed to Sumatra and studied with Dharmarakṣita for twelve years. A story is told that Atiśa heard that the inhabitants of Tibet were very pleasant and easy to get along with. The aphorisms on mind training in their present form were composed by Chekawa Yeshe Dorje (1101–1175 CE). The Root Text[edit] Slogan 1. 1. 2. 3. 4.

Lungs Can Taste! Weird Discovery Points to New Asthma Treatments | 80beats |... Your lungs know a bitter sensation when they taste one. Yes, taste. In a Nature Medicine study, Stephen B. Like tastebuds on the tongue, the receptors react to bitterness, but unlike tastebuds they do not send any signals to the brain. The researchers first thought that bitter compounds might trigger a constriction of the airways, to prevent toxins from further infiltrating the lungs. Liggett’s team had been looking for new means to relax and open up a person’s airway, beyond the standard beta 2 agonist inhalant for asthma patients, when they stumbled upon this. When the researchers tried bitter aerosols on constricted airways in mice or on sections of human airways freshly removed from cancer patients, they were surprised to discover the lung muscles quickly relaxed. The team’s discovery doesn’t point to a cure for asthma. There are thousands of compounds known to have a bitter taste, such as quinine and many drugs, he said. Image: iStockphoto

What They Used To Teach You At Stanford Business School - Market Movers Chris Wyser-Pratte, who got his MBA from Stanford in 1972 and then spent the next 23 years as an investment banker, sent me the following note last night. I'm reprinting it here with his permission: I learned exactly seven things at Stanford Graduate School of Business getting an MBA degree in 1972. Symbolic and Interpretive Anthropologies - Anthropological Theories - Department of Anthropology - The University of Alabama The guides to anthropological theories and approaches listed below have been prepared by graduate students of the University of Alabama under the direction of Dr. Michael D. Murphy. As always, !Caveat Retis Viator! Scott Hudson and Carl Smith and Michael Loughlin and Scott Hammerstedt (Note: authorship is arranged stratigraphically with the most recent author listed first) Basic Premises: Symbolic anthropology studies the way people understand their surroundings, as well as the actions and utterances of the other members of their society. Symbolic anthropology views culture as an independent system of meaning deciphered by interpreting key symbols and rituals (Spencer 1996:535). Symbolic anthropology can be divided into two major approaches. The major difference between the two schools lies in their respective influences. Symbolic anthropology was also a reaction against materialism and Marxism. Leading Figures: Clifford Geertz (1926-2006) studied at Harvard University in the 1950s.