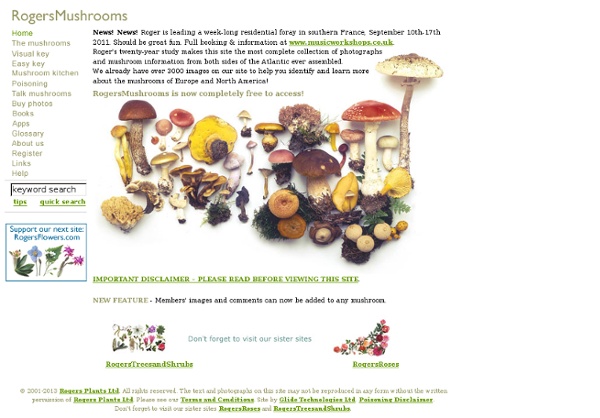 Mushrooms, Fungi, Mycology How to Get to the Avatar Grove in Port Renfrew, BC Directions Coming from Victoria, BC – Drive time approx 2.5 hours Click for larger imageA giant Douglas-fir (left) and burly redcedar (right) in the incredible Avatar Grove near Port Renfrew, BC.Photo by TJ Watt *** Please note: The Avatar Grove is wilderness area! Work has begun on the initial construction of a boardwalk (See photos here or click here to donate) in some areas of the trail but good balance and basic hiking experience is required in certain areas ie. possible muddy sections, slippery roots or slopes, crossing over logs, etc. The trail is not like Cathedral Grove! Here is a Google map showing where to go as you enter Port RenfrewPoint A is the Coastal Kitchen Cafe in Port Renfrew and Point B is the Avatar Grove. View Larger Map

Bonsai styles, shapes and forms explained Over the years many styles to classify Bonsai trees have been advanced, closely resembling circumstances in nature. These styles are open to personal interpretation and creativity, meaning that trees do not necessarily need to conform to any form. Still, the styles are important to gain a basic understanding of shapes and should serve as guidelines to successfully train miniature trees. Bonsai styles movie The Bonsai styles More information Check the image of all the Bonsai styles.Read about the history of Bonsai or about the meaning of BonsaiReturn to the Bonsai homepageWritten by: Oscar J.

Rare ‘Devil’s Cigar’ fungus discovered in Nara One of the world's rarest fungi, an exotic star-shaped mushroom known to exist at only three locations on Earth, has been discovered in the mountains of Nara prefecture. The Devil's Cigar (a.k.a. "Texas Star") -- known to botanists as Chorioactis geaster -- had been observed only in central Texas and at two remote locations in Japan prior to the recent discovery in Nara. The peculiar fungus is described as a dark brown cigar-shaped capsule that transforms into a tan-colored star when it splits open to release its spores. First reported in 1893 in Austin, Texas, the curious mushroom appears in a limited area of central Texas each year, and until now, the rare sightings in Japan have occurred in forests in Miyazaki and Kochi prefectures. The recent Nara discovery was made by Masakuni Kimura, curator of a natural history museum in the town of Kawakami (Nara prefecture). The site of the Nara discovery, like the previous Miyazaki and Kochi sites, is located in a humid forest.

Koksilah River - Ancient Forest Hiking Guide Vancouver Island Area Description: The Koksilah Ancient Forest Reserve is an absolutely incredible stand of old-growth Douglas-firs that rivals Cathedral Grove with its beauty and scale. Old-growth Douglas-firs have been reduced to 1% of their original numbers on Vancouver Island so getting a chance to hike through a forest so full of them is an incredible experience. Most of the grove’s big trees range from 4 to 6ft in diameter with the largest ones reaching over 8ft across at the base. The forest is located alongside the winding Koksilah River which has excellent swimming areas as well as a Provincial Campground nearby (the park does not include the giant trees). Status: Unprotected Upon reaching the area in the 1980’s, two loggers put down their chainsaws and refused to cut the forest for they felt it was something remarkable. Hiking Guide: Difficulty – Moderate Once you have followed the driving directions (below) and arrived, use these instructions to access the area. Total walking distance 1.85km.

People A people is a plurality of persons considered as a whole, as in an ethnic group or nation. Collectively, for example, Jews are known as "the Jewish people", European Gypsies comprise the bulk of "the Romani people", and Palestinian Arabs are called "the Palestinian people". In politics Various republics govern, or claim to govern, in the name of the people. A People's Republic is typically a Marxist or socialist one-party state that claims to govern on behalf of the people. Chapter One, Article One of the Charter of the United Nations states that peoples have the right to self-determination.[1] In law In criminal law, in certain jurisdictions, criminal prosecutions are brought in the name of the People. The Right to Bear Arms The Second Amendment of the United States Constitution has been interpreted differently over time, with the word 'people' playing an important role. See also

Synsepalum dulcificum The berry itself has a low sugar content[7] and a mildly sweet tang. It contains a glycoprotein molecule, with some trailing carbohydrate chains, called miraculin.[8][9] When the fleshy part of the fruit is eaten, this molecule binds to the tongue's taste buds, causing sour foods to taste sweet. At neutral pH, miraculin binds and blocks the receptors, but at low pH (resulting from ingestion of sour foods) miraculin binds protons and becomes able to activate the sweet receptors, resulting in the perception of sweet taste.[10] This effect lasts until the protein is washed away by saliva (up to about 60 minutes).[11] The names miracle fruit and miracle berry are shared by Gymnema sylvestre and Thaumatococcus daniellii,[2] which are two other species of plant used to alter the perceived sweetness of foods. History[edit] For a time in the 1970s, US dieters could purchase a pill form of miraculin.[15] The idea of the "miraculin party"[15] was conceived then. Characteristics[edit] Uses[edit]

Rainy season brings glow-in-the-dark mushrooms 24 May 2006 With the arrival of Japan's rainy season, a mysterious type of green, glow-in-the-dark mushroom begins to sprout in Wakayama prefecture. The Mycena lux-coeli mushrooms, known locally as shii no tomobishi-dake (literally, "chinquapin glow mushrooms"), sprout from fallen chinquapin trees. As they grow, a chemical reaction involving luciferin (a light-emitting pigment contained within the mushrooms) occurs, causing them to glow a ghostly green. The luminescent mushrooms were long believed to be indigenous solely to Tokyo's Hachijojima Island after they were discovered there in the early 1950s. In 1995, however, mycologists found the fungus growing wild in coastal areas of the southern Kii peninsula, as well as in Kyushu and other areas. The mushrooms thrive in humid environments, popping up during Japan's rainy season, which typically lasts from the end of May to July. [Source: Mainichi Shimbun]

Recipes - Pacific Rim Mushrooms Wipe 4 perfect cep caps. Make a cross-shaped cut on top of each and place in an ovenproof dish or roasting tin (pan). Season lightly with salt and pepper and add a drop of olive oil. Put in a preheated oven at 240°C (475°F, gas 9) for 5 minutes. Ceps a la Bordelaise - Porcini a la Bordelaise Trim the ceps; cut them into thin slices if they are very large, halve them if of medium size, or leave them whole if they are small. Ceps a la Hongroise - Porcini a la Hongroise Trim and wash 500 g (18 oz) ceps. Ceps a la mode Bearnaise - Porcini a la mode Bearnaise Trim and wash some large ceps and put them in the oven to release the excess juices. Ceps a la Provencale - Porcini a la Provencale Prepare as for ceps a la bordelaise, but use olive oil and fry for longer. Ceps au Gratin - Porcini au Gratin Trim the ceps, separating the caps from the stalks; season with salt and pepper, then coat with melted butter or oil. Organic Oyster mushroom recipe Asparagus and Oyster Mushroom Fricassee

Life Life is a characteristic distinguishing objects having signaling and self-sustaining processes from those that do not,[1][2] either because such functions have ceased (death), or because they lack such functions and are classified as inanimate.[3][4] Biology is science concerned with the study of life. Though life is confirmed only on the Earth, many think that extraterrestrial life is not only plausible, but probable or inevitable.[15][16] Other planets and moons in the Solar System have been examined for evidence of having once supported simple life, and projects such as SETI have attempted to detect radio transmissions from possible alien civilizations. According to the panspermia hypothesis, microscopic life exists throughout the Universe, and is distributed by meteoroids, asteroids and planetoids.[17] Early theories Materialism Herds of zebra and impala gathering on the Maasai Mara plain Democritus (460 BC) thought that the essential characteristic of life is having a soul (psyche).

BSA Image Collection Cyber's Cheep CD-Spindle Grow Tek I orginally did this for fun, It makes a nice simple little grow that is easily hidden. You will need a 1 pint colonized grain jar to make this work. Things you will need 100 CDR spindle, I think everyone that has a CD burner has a few of these laying around! Duck Tape and Knife Spray bottle of distilled water Spray bottle of alcohol Sterile spoon plastic wrap Vermiculite 1/4 cup measuring cup a bowl and a colonized pint of WBS OK Lets start. Next you want to use the ducktape and cover 3" of the bottom of the spindle This works out to be a layer starting at the bottom with a second layer 1/2 over the first. (2" wide ducktape) Don't forget to cover the bottom of the spindle we do not want any light getting in! Take the bottle of alcohol and spray and clean the inside of the spindle. I am using a dental spoon which has been sterilized on an autoclave bag. Mix them in a bowl. Some people will microwave or pasteurize the vermiculite. Now add your vermiculite to bring it up to the tape line.

Edible and Poisonous Mushrooms of the World