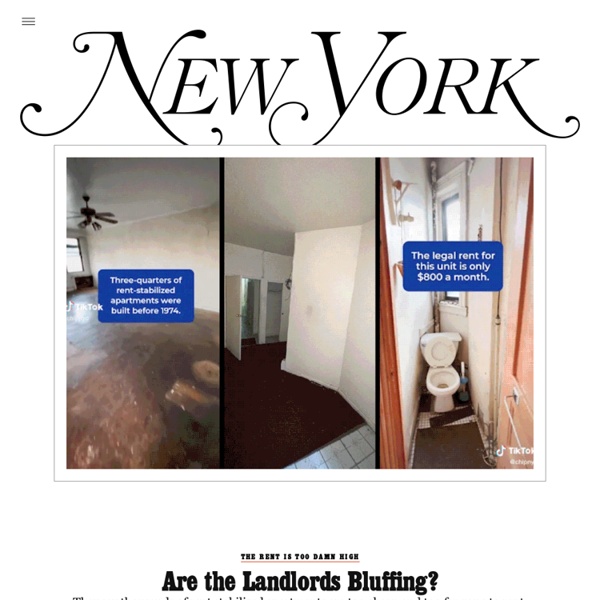 Jerry Saltz: How to Be an Artist Jerry Saltz, New York’s art critic, as Salvador Dalí, based on a photograph by Philippe Halsman. Photo: Photo by Marvin Orellana. Photo Illustration by Joe Darrow. Art is for anyone. It’s just not for everyone. I know this viscerally, as a would-be artist who burned out. Science Two possible explanations of mysterious earthquake lights — Centuries of humans have reported strange lights moving along the ground before an earthquake strikes. Now, two different teams of scientists have two competing theories that could explain where those lights come from and how they're made. — Maggie • 5 Maggie Koerth-Baker at 6:57 am Fri, Apr 11, 2014 • 16 Oarfish are freaky sea dragons. You might remember them from the beaching incidents last fall, when two oarfish turned up on the coast of California within a week.

10 Impressive Questions to Ask in an Interview 2018 Get Ask a Boss delivered every week As someone who has interviewed probably thousands of job candidates in my career, I’ve long been surprised by how many people don’t ask good questions when their interviewer gives them the opportunity. A surprising number of candidates don’t have many questions at all, or simply use the time to try to further pitch themselves for the job. OKR Objectives and key results (OKR) is a framework for defining and tracking objectives and their outcomes. The development of OKRs is generally attributed to Andy Grove the "Father of OKRs", who introduced the approach to Intel during his tenure there and documented this in his 1983 book "High output management[1]". Grove explained his simple but effective concept thus: "The key result has to be measurable.

In the fledgling connected-TV market, buying ads direct is often cheaper TV ads are slowing becoming more Internet-like, but that’s not leading to a digital media-like swing to the power of aggregators — at least not yet. Ad buyers are finding that it can often be cheaper to buy ads on connected TV from the media companies themselves, including TV networks, than from the increasing number of companies that aggregate inventory across many publishers’ connected TV apps. There is “a significant price premium” to buying connected TV inventory through aggregators, whether that be connected TV platforms, like Roku or Samsung, pooling inventory across media companies’ apps or ad tech firms that similarly target campaigns across multiple inventory sources, said Sean Odlum, CEO of Bliss Point Media, an agency that specializes in video advertising. The cost dynamic would seem counterintuitive. Traditionally it’s more expensive to buy ads directly from a publisher than through an intermediary that packages inventory from multiple publishers.

Inhotim Art museum, botanical garden in Minas Gerais, Brazil The Inhotim (Inhotim Institute) is a museum and contemporary art museum as well as a botanic garden located in Brumadinho in the Brazilian state of Minas Gerais, founded by former mining magnate Bernardo Paz.[1] History[edit] In the 1980s, Paz began buying tracts of land surrounding his modest farmhouse as developers threatened to destroy the natural landscape.[2] The farm had been named by locals after a former owner, an English engineer known as Senhor Tim — Nhô Tim in Minas Gerais's dialect.[3] In 2011, Inhotim joined the Brazilian government's official botanical garden association, and the staff has begun an inventory of its 4,500 plant species, including 1,300 types of palm alone. audio walter byers ncaa gross commercial.climate of intercollefiare athletes nei-plantation Skip to main contentAccessibility help About 5 results Web results Oct 13, 2017 - Walter Byers established the NCAA's enforcement division and turned the ... comp claims for athletes, NCAA executive director Walter Byers met with his legal team and ... At the same time, he grew the business of the NCAA. ...

Digital Rights Management - Amazon Elastic Transcoder You can use Digital Rights Management (DRM) to restrict access to your playlist so that only authenticated users can view your content. DRM works by restricting playback of a file to users who have authenticated with a third-party DRM license server. DRM accomplishes this by including, or packaging, a DRM header in the segments of the file.