The Universe in Colour 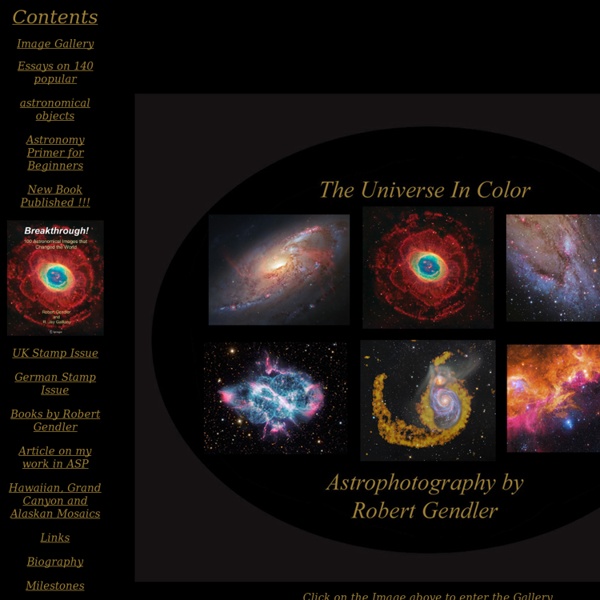 Astronomy Picture of the Day Discover the cosmos! Each day a different image or photograph of our fascinating universe is featured, along with a brief explanation written by a professional astronomer. 2016 April 15 Multimedia Gallery: Viewing the Andromeda Galaxy Feb. 17, 2010 - This image from NASA's Wide-field Infrared Survey Explorer, or WISE, highlights the dust that speckles the Andromeda galaxy's spiral arms. It shows light seen by the longest-wavelength infrared detectors on WISE (12-micron light has been color coded orange, and 22-micron light, red). The hot dust, which is being heated by newborn stars, traces the spidery arms all the way to the center of the galaxy. Telltale signs of young stars can also be seen in the centers of Andromeda's smaller companion galaxies, M32 and M110. Andromeda, also called M31, is 2.5 million light-years away, and is the nearest large neighbor to our Milky Way galaxy. Image Credit: NASA/JPL-Caltech/WISE Team

Astrophysics Astrophysics People have gazed at the stars, given them names, and observed their changes for thousands of years. NASA joined the ancient pursuit of knowledge of our universe comparatively recently. Goals The science goals of Astrophysics are breathtaking: we seek to understand the universe and our place in it. Frequently Asked Questions in Cosmology Tutorial : Part 1 | Part 2 | Part 3 | Part 4 | Age | Distances | Bibliography | Relativity What is the currently most accepted model for the Universe? The current best fit model is a flat ΛCDM Big Bang model where the expansion of the Universe is accelerating, and the age of the Universe is 13.7 billion years. Back to top. What is the evidence for the Big Bang?

Sketchbook Secrets: 50 Beautiful Sketchbook Scans The sketchbook is—to borrow a term from the new millenniums’ popular discourse—an artist’s BFF. It’s a diary for the visually inclined—a place where artists can most comfortably explore their personal thoughts, work out their visual needs, practice, maintain a visual history, and hopefully create the unpolished work that will eventually lead to amazing work for the world to see. But, sometimes, when we’re lucky, we get to see the process. Below are 50 beautiful sketchbook scans from 35 talented artists. Allen Sutton Mattias Adolfsson Hubble data predicts Milky Way galactic collision When Galaxies Collide! It sounds like an early science fiction novel. However, analysis of Hubble measurements shows that our own Milky Way galaxy is moving toward a head-on collision with our nearest neighbor, the Andromeda galaxy (also known as M31).

Great Attractor Panoramic view of the entire near-infrared sky. The location of the Great Attractor is shown following the long blue arrow at bottom-right. The Hubble Telescope turned its lens to the region of the sky where the Great Attractor is located. The Great Attractor is a gravity anomaly in intergalactic space within the range of the Hydra-Centaurus Supercluster that reveals the existence of a localized concentration of mass equivalent to tens of thousands of galaxies, each of which represents the mass of the Milky Way; this mass is observable by its effect on the motion of galaxies and their associated clusters over a region hundreds of millions of light-years across. Future - Science & Environment - Drake equation: How many alien civilizations exist? Are we alone? It is a question that has occupied mankind for centuries. Today, we live in an age of exploration, where robots on Mars and planet-hunting telescopes are beginning to allow us to edge closer to an answer. While we wait to establish contact, one technique we can use back on Earth is an equation that American astronomer Frank Drake formulated in the 1960s to calculate the number of detectable extraterrestrial civilizations may exist in the Milky Way galaxy. It is not a rigorous equation, offering a wide range of possible answers. Instead it is more a tool used to help understand how many worlds might be out there and how those estimates change as missions like Kepler, a telescope that is currently searching for Earth-like planets, begin to discover more about our universe.

Hubble Wallpaper Videos See the universe come to life via animations, scientific visualizations, expert commentary, and more. The Great Attractor The Question (Submitted September 24, 1999) The great attractor has been described as an agglomeration of matter. What would it look like, a galaxy ? What are its proportions and what are its effects on the Milky Way and other local galaxies. The Answer The Massey Experience Welcome to The Massey Experience, an online exploration of the ideas, themes, theories and characters that form Neil Turok's 2012 Massey Lectures The Universe Within: From Quantum to Cosmos. The Massey Experience is an immersive, evolving companion to Neil's Massey Lectures which aired on CBC Radio's IDEAS in November 2012. The story is a journey from quantum to cosmos: where we've come from, where we're going and what we've learned along the way. Neil argues that we're on the cusp of yet another major transformation: a coming quantum revolution that will supplant our current digital age. It's the story of science and technology, but it is also the story of who we are: amazing creative humans.

The Helix Nebula: Unraveling at the Seams A dying star is throwing a cosmic tantrum in this combined image from NASA's Spitzer Space Telescope and the Galaxy Evolution Explorer (GALEX), which NASA has lent to the California Institute of Technology in Pasadena. In death, the star's dusty outer layers are unraveling into space, glowing from the intense ultraviolet radiation being pumped out by the hot stellar core. This object, called the Helix nebula, lies 650 light-years away, in the constellation of Aquarius. Also known by the catalog number NGC 7293, it is a typical example of a class of objects called planetary nebulae.

Hubble zooms in on a space oddity A strange, glowing green cloud of gas that has mystified astronomers since its discovery in 2007 has been studied by Hubble. The cloud of gas is lit up by the bright light of a nearby quasar, and shows signs of ongoing star formation. One of the strangest space objects ever seen is being scrutinised by the penetrating vision of the NASA/ESA Hubble Space Telescope. A mysterious, glowing green blob of gas is floating in space near a spiral galaxy. Hubble uncovered delicate filaments of gas and a pocket of young star clusters in the giant object, which is the size of the Milky Way.