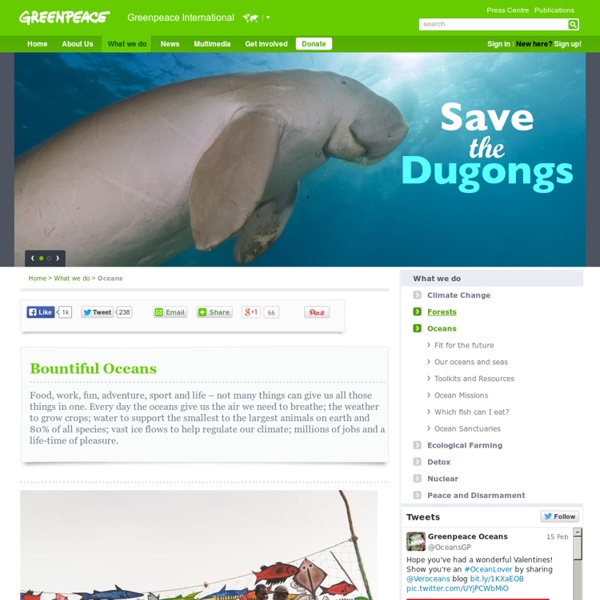 Food, work, fun, adventure, sport and life – not many things can give us all those things in one. Every day the oceans give us the air we need to breathe; the weather to grow crops; water to support the smallest to the largest animals on earth and 80% of all species; vast ice flows to help regulate our climate; millions of jobs and a life-time of pleasure. Send us your favourite ocean image and it could be featured here! You and I are alive right now because of the oceans. They are home to the largest animal our planet has ever known – the now-endangered blue whale - but there are still huge areas of ocean that humans have never seen. Earth's longest mountain range is not on land but under the sea - the Mid-Oceanic ridge system, which winds around the globe from the Arctic Ocean to the Atlantic. More people have stood on the moon than dived the deepest ocean trench and less than 5% of all the oceans have been explored. We can do it. The oceans support billions of us.

Recycle This - Creative ideas for reusing and recycling random stuff Overfishing 101: How Ocean Fish Populations are Managed in the U.S. – National Geographic News Watch In the second post of a special series to mark the 35th anniversary of the U.S. Magnuson-Stevens Fishery Conservation and Management Act, a law that is helping to rebuild America’s depleted ocean fish populations and ensure their long-term sustainability, Lee Crockett looks at some of the basics of why all Americans should care about how our fish are managed. By Lee Crockett Fish are an essential component of life in the world’s oceans, with the state of their populations serving as a bellwether of the health of ocean life overall. Unfortunately, many species around the world are in trouble. Pollution, habitat destruction and overfishing (removing fish from the ocean faster than they can reproduce) have impoverished our oceans. All too often the discussion around the issue of overfishing has been limited to a small group of stakeholders such as fishermen, conservationists and scientists. Understanding Overfishing Footnotes: [ii] U.N. [iii] M.J. [iv] NMFS, “2010 Status of U.S.

National Geographic: The Ocean 10 Healthy Ways to Help a Hangover - Health While it's not something I'm proud of, I've got plenty of hangovers under my belt. See, despite all of my healthy practices—yoga, deep breathing, clean cosmetics, brown rice and kale eating—I'm just not that great at saying no to that third or fourth drink once I get going. Bless those of you who are—and damn those of you who are immune to hangovers altogether! Apparently you exist, and you are lucky. But while I am working on my to-don't list (new rule: don't drink before dinner), I've also concluded that the only thing worse than a hangover is the guilt and self-loathing that can come with it. And where does that take most of us? Got any to add? Have some miso soup with your eggs. Take a handful of omega 3s—and then repeat. Drink kombucha tea. Have sex or just a good cuddle. Get some body work. Try some hydrotherapy. Do some exercise—but just a little bit! Have a banana/blueberry/kale/lemon smoothie. Drink coconut water from a coconut. Enjoy your hangover.

About | Localcooling Welcome to the LocalCooling Blog, LocalCooling is a website dedicated to raising awareness through discussion of the latest issues and topics involving the environment. We encourage the community to continue to contribute by commenting, discussing and posting content which is relevant or pertains to posts presented on this blog. We live in a time, where technology is a part of our daily lives, but the price for having this commodity is having the reverse effect on our surroundings. If everybody in the world becomes aware of this fact, and together as a community, we contribute what we can, then the primary goals of LocalCooling would be met. The LocalCooling forum and application which was once a popular tool aimed at managing power consumption on computers has been discontinued since power management settings in Windows Vista have been drastically improved. The LocalCooling movement is taking a new approach towards actively contributing to the environment. LocalCooling Team.

Study: Bioelectricity bests biofuels on miles per acre | Green Tech Growing plants to make electricity is a more efficient and environmentally sound way to power vehicles than biofuels, according to a study meant to spark a debate over energy policy. The study's authors modeled how far different classes of cars could go based on the available energy from a unit of land and found that bioelectricity--burning biomass to make electricity--far outperforms ethanol. The paper, published on Thursday in Science, found that bioelectricity delivered 81 percent more distance per unit area of crop land than ethanol. In one example, they found that a small truck powered by bioelectricity could travel almost 15,000 miles compared with 8,000 comparable miles for an internal combustion equivalent. Making electricity from biomass, such as switchgrass, is made by burning the plants to make steam to turn an electricity turbine. Liquid fuels have one clear advantage over electric vehicles in that refueling is far faster.

Earth: our water world Rich biodiversity Life began in the oceans, and continues to thrive in its diverse habitats. With as many as 100 million species - from the largest animal that has ever lived on Earth, the blue whale, to the tiniest bacteria - marine biodiversity far outweighs that on land. And new species are being discovered all the time. Vital role for life on land... ...and shapers of human history The oceans have also shaped human history, culture, and lives - and continue to do so. State of the Ocean.org Outline of Your Area Outline of Your Area Use a large piece of paper (or any other material to write on), and draw the following information. Use different colours, and make sure you have plenty of space to accommodate all the information of the next steps. What is the basic outline of the local area you want to focus on? Where to get further information: For a first step, it may be helpful to draw this map (simply by hand) - but use a piece of paper that is large enough to it can accommodate further notes. SSWM Tools that may help you here: The Case of Unsustainaville Unsustainaville's General Outline The general outline of Unsustainaville. Unsustainaville is located in a plain, next to a river and some miles upstream from the sea. After you have drawn the outline, you continue by analysing each section of the water and nutrient cycle in your locality, as shown in the next steps of this tutorial.