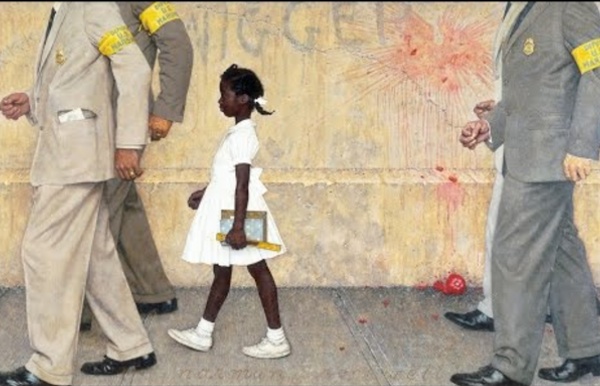 Related:  1ère- Jazz as an expression of solidarity in a community • 1ère Spé Mockingbird • BlackAmericans

Little Rock Nine: the day young students shattered racial segregation Minnijean Brown Trickey didn’t intend to make a political statement when she set off with two friends for her first day in high school. She was, after all, only 15. “I mean, part of growing up in a segregated society is that it’s a little sort of enclave and you know everybody,” says Trickey, who is African American. “So, I was thinking: ‘Wow! Strange Fruit: A protest song with enduring relevance First recorded in 1939, the protest song Strange Fruit came to symbolise the brutality and racism of the practice of lynching in America's South. Now, more than seventy years later, such is the song's enduring power that rapper Kanye West sampled the track on his latest album Yeezus. "The smell of the honeysuckle brings all of it back. That's the smell prevalent in the area we lived in.

Martin Luther King Jr. Explains the Importance of Jazz: Hear the Speech He Gave at the First Berlin Jazz Festival (1964) Martin Luther King Jr.’s dream of full inclusion for Black Americans still seems painfully unreal fifty years after his death. By most significant measures, the U.S. has regressed. De facto housing and school segregation are entrenched (and worsening since the 60s and 70s in many cities); voting rights erode one court ruling at a time; the racial wealth gap has widened significantly; and open displays of racist hate and violence grow more worrisome by the day. Yet the movement was not only about winning political victories, though these were surely the concrete basis for its vision of liberation. It was also very much a cultural struggle. Black artists felt forced by circumstances to choose whether they would keep entertaining all-white audiences and pretending all was well.

‘To Kill a Mockingbird’ Removed From School in Mississippi Eighth graders in Biloxi, Miss., will no longer be required to read “To Kill a Mockingbird,” Harper Lee’s Pulitzer Prize-winning novel about racial inequality and the civil rights movement that has been taught in countless classrooms and influenced generations of readers. Kenny Holloway, the vice president of the Biloxi School Board, told The Sun Herald there had been complaints about the book. “There is some language in the book that makes people uncomfortable, and we can teach the same lesson with other books,” he said. “It’s still in our library. But they’re going to use another book in the eighth-grade course.”

Bloody Sunday 1965 Video - Civil Rights Movement My TV provider is not listed. Why not? We are currently working on adding more TV providers. Politics and Jazz - CounterPunch.org When bebop was born, it was the voice of black America. Black Americans were calling for freedom, and jazz expressed it better than mere words. Charlie “Bird” Parker played Now’s the Time, insisting the moment was right for social change. Charles Mingus composed Fable of Faubus (1959) in response to Orval Faubus’s racism as governor of Arkansas. History of Lynchings in the South Documents Nearly 4,000 Names The lynching report is part of a longer project Mr. Stevenson began several years ago. One phase involved the erection of historical markers about the extensive slave markets in Montgomery.

This Make America Great Again Song is the Funniest Thing You Will Watch This Week Progressive group MoveOn.Org tried to inject some humor into this negative presidential cycle by hosting “Laughter Trumps Hate,” a friendly competition “to find the funniest and smartest comedians to take on Donald Trump and the GOP’s politics of hate.” This musical number was a crowd favorite – and we can certainly see why. When Trump says “Make America great again,” when exactly does he mean?

Teaching Activities for: ‘A Lynching Memorial Is Opening. The Country Has Never Seen Anything Like It.’ Before reading the article: Examine the Times graphic below, or a larger version here. What does the map show, and from what time period? 2. Who is Bryan Stevenson and what does his organization do, and why? 3. The problem we all live with by missjonard on Genial.ly ,Welcome to The Norman Rockwell Museum !Come in !,You are now inside the museum.Click on the painting to start discovering the document.,The problem we all live with, Norman Rockwell, 1964,,,Now, take a seat tostudy the document. Remarks by the President on Trayvon Martin James S. Brady Press Briefing Room THE PRESIDENT: I wanted to come out here, first of all, to tell you that Jay is prepared for all your questions and is very much looking forward to the session.

4. Segregation in the USA - The English Website Segregation in the USA If you get a chance, I advise you to watch these films which will help you understand the historical context of the situation of black people in the USA 12 Years a Slave - Steve McQueen Mississippi Burning - Gene Hackman What Did Rosa Parks Really Achieve 60 Years Ago? The story of Rosa Parks's arrest goes something like this: A little after 6 p.m., 60 years ago today, Rosa Parks was arrested in Montgomery, Alabama, for refusing to move from the white section of the city bus to the rear reserved for blacks. The offense on her arrest record was simply labeled "misc." for miscellaneous.

Martin Luther King III reflects on father's legacy amid George Floyd protests Amid nationwide protests following the death of George Floyd, Martin Luther King III, son of the famed civil rights activist, is speaking out about what his father would make of today's racial tensions. Joining Sunday TODAY's Willie Geist, King explained that he believes his father living past 1968, when he was shot and killed at a sanitation workers' strike, would've drastically changed the criminal justice system. "My father, I believe, and none of us can speak for him, but certainly through his words, he always had compassion, and so compassion would certainly be in order," he began. "But ... I just believe that had my father lived, we wouldn't be even dealing with these issues. We would've resolved them by now."

Related:
Related:  1ère- Jazz as an expression of solidarity in a community   -  1ère Spé Mockingbird   -  BlackAmericans