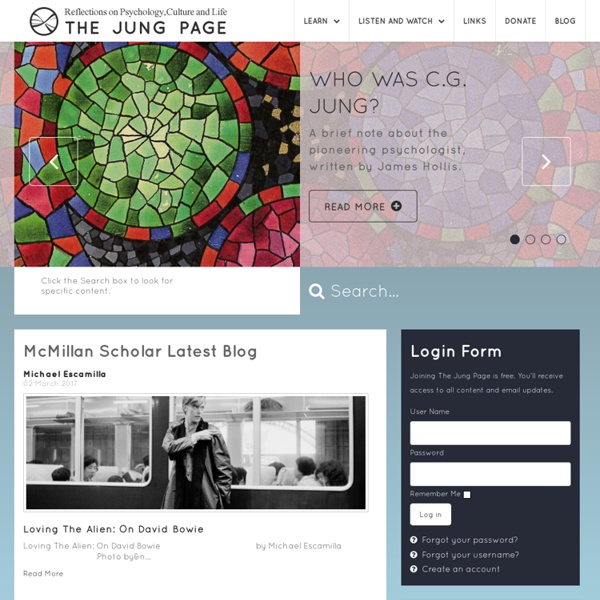 Welcome to WWW.ZOE7.COM_ Consciousness, Hallucinogens, Hyperspace and Beyond Carl Jung Carl Gustav Jung (/jʊŋ/; German: [ˈkarl ˈɡʊstaf jʊŋ]; 26 July 1875 – 6 June 1961), often referred to as C. G. Jung, was a Swiss psychiatrist and psychotherapist who founded analytical psychology.[2] Jung proposed and developed the concepts of the collective unconscious, archetypes, and extraversion and introversion. The central concept of analytical psychology is individuation—the psychological process of integrating the opposites, including the conscious with the unconscious, while still maintaining their relative autonomy.[3] Jung considered individuation to be the central process of human development.[4] Jung saw the human psyche as "by nature religious"[5] and made this religiousness the focus of his explorations.[6] Jung is one of the best known contemporary contributors to dream analysis and symbolization. Early years[edit] Childhood family[edit] Jung's mother left Laufen for several months of hospitalization near Basel for an unknown physical ailment. Childhood memories[edit]

C. G. Jung Institut Zürich C.G. Jung and the Red Book Introduction to the Red Book Lectures There are two sets of lectures presented below (in mp3 audio format), all recorded during the original presentations. The first series of four lectures was presented at Westminster College to the general public in January and February of 2010, shortly after the Red Book was published. It provides a useful introduction to Jung and his Red Book (Liber Novus). The second series of seven seminar evenings with a total of fourteen lectures was presented at Westminster College from September 2011 to May 2012. The seminar group was composed mostly of psychologists in clinical practice. C. Four lectures by Lance S. In November of 1913 C. The years … when I pursued the inner images were the most important time of my life. For nearly a century the Red Book, Liber Novus, remained Jung’s hidden treasure. Seminar Introduction and Overview: C. The Red Book: Liber Novus provides the long-awaited primary evidence to the truth of those words. C. II. III. IV. V. VI.

Albert Hofmann Foundation Carl Jung Dr. C. George Boeree Anyone who wants to know the human psyche will learn next to nothing from experimental psychology. Freud said that the goal of therapy was to make the unconscious conscious. A younger colleague of his, Carl Jung, was to make the exploration of this "inner space" his life's work. He had, in addition, a capacity for very lucid dreaming and occasional visions. But on August 1 of that year, World War I began. He carefully recorded his dreams, fantasies, and visions, and drew, painted, and sculpted them as well. A leathery brown dwarf would show up guarding the entrance to the unconscious. Jung dreamt a great deal about the dead, the land of the dead, and the rising of the dead. Critics have suggested that Jung was, very simply, ill himself when all this happened. Biography Carl Gustav Jung was born July 26, 1875, in the small Swiss village of Kessewil. could read several ancient ones, including Sanskrit, the language of the original Hindu holy books. Theory Archetypes Mana

ilson Van Dusen: The Presence of Spirits in Madness The Presence Of Spirits In Madness A Confirmation of Swedenborg in Recent Empirical Findings by Wilson Van Dusen "Reprinted courtesy of the Swedenborg Foundation, N.Y., N.Y. 10010" When Wilson Van Dusen wrote, The Presence of Spirits in Madness he was Chief Psychologist at Mendocino State Hospital in California where he worked among the mentally ill for 17 years. Also, like Swedenborg, he has widespread interest in science and technology and is a licensed master mariner. By an extraordinary series of circumstances a confirmation appears to have been found for one of Emanuel Swedenborg's more unusual doctrines-that man's life depends on his relationship to a hierarchy of spirits. All the people involved hallucinated. mentally ill as raving lunatics is far from reality. The people described here range from a few months in the hospital to twenty years. After dealing with hundreds of such patients, I discovered about four years ago that it was possible to speak to their hallucinations.

Jung Society of Austin The Society for Laingian Studies Carl Jung Your vision will become clear only when you look into your heart ... Who looks outside, dreams. Who looks inside, awakens. Carl Gustav Jung (IPA: [ˈkarl ˈgʊstaf ˈjʊŋ]) (26 July 1875 – 6 June 1961) was a Swiss psychiatrist and founder of analytical psychology. Quotes[edit] The dream is the small hidden door in the deepest and most intimate sanctum of the soul, which opens to that primeval cosmicnight that was soul long before there was conscious ego and will be soul far beyond what a conscious ego could ever reach. No one can flatter himself that he is immune to the spirit of his own epoch, or even that he possesses a full understanding of it. Our blight is ideologies — they are the long-expected Antichrist!

Multimodal Therapy: A Primer, Article by Arnold Lazarus, Ph.D., ABPP Introduction It appears that most theoreticians and clinicians are now in favor of using a broad-spectrum approach to treating patients. For example, there is a current trend toward the use of holistic treatments that not only consider intraindividual, interpersonal and systemic factors, but also argue for the inclusion of a separate transpersonal (i.e., spiritual) dimension. Multimodal therapy (MMT) strives to combine a broad and interactive set of systematic strategies, and offers particular assessment tactics that enhance diagnosis, promote a focused range of effective interventions, and improve treatment outcomes. As a psychotherapeutic approach, the theoretical underpinnings of MMT rest on a broad-based social and cognitive learning theory, while also drawing on effective techniques from many additional disciplines - without necessarily subscribing to their particular theories (i.e., it espouses technical eclecticism). Top of Page 1. A. B. 2. A. B. C. D.