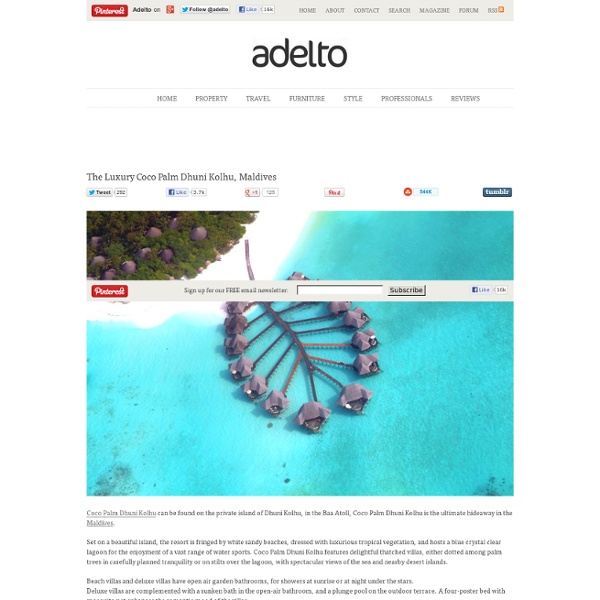 The Luxury Coco Palm Dhuni Kolhu Resort, Maldives Coco Palm Dhuni Kolhu can be found on the private island of Dhuni Kolhu, in the Baa Atoll. Coco Palm Dhuni Kolhu is the ultimate hideaway in the Maldives. Set on a beautiful island, the resort is fringed by white sandy beaches, dressed with luxurious tropical vegetation, and hosts a blue crystal clear lagoon for the enjoyment of a vast range of water sports. Coco Palm Dhuni Kolhu features delightful thatched villas, either dotted among palm trees in carefully planned tranquility or on stilts over the lagoon, with spectacular views of the sea and nearby desert islands. Beach villas and deluxe villas have open air garden bathrooms, for showers at sunrise or at night under the stars. The all wood water villas offer extreme indulgence for those who are looking for exclusivity and seclusion. Images courtesy of Coco Palm Resorts About Assif Majid Assif is a freelance British journalist who spends his time between Leeds, Manchester and London.

wNw Bar in Binh Duong, Vietnam / Vo Trong Nghia Sinbadesign Vo Trong Nghia studied architecture as a student on the Japanese Government’s Scholarship. After graduation from Tokyo University and Nagoya Institute of Technology, he returned to Vietnam and created an energy-saving architectural style through using environmentally – friendly materials and architectural design. In 2006, he started his own architectural company in Vietnam, Votrongnghia Co. , Ltd . Alongside his architectural practice, Nghia has been invited to have lectures in several foreign countries such as China, Japan, Sri Lanka …

Bali Hotels - Discount Rates for all Hotels in Bali-Indonesia Bali is a world away from the rest of Indonesia, and it's a longstanding favorite with independent travelers. Itinerant surfers started coming as early as the 1930s, but it wasn't until the 1960s that surfing holidays in Bali became fashionable. Today, the island legacy continues, and Bali sees as many bohemian surfers as it does affluent resort tourists. With miles of luxurious coastline and a range of accommodation in Bali, this small island has room enough for everyone. Indonesia may have the world's largest Muslim population, but Bali fosters its own distinct culture.

Stunning N Funny Caricatures of Celebrities Posted admin in Digital Art on October 12th, 2010 / 7 Comments Advertisement Many artists can draw a decent likeness of a well-known face, but the challenge is to capture not just the likeness but the character of the person. Capturing this truth, or essence, is, for me, the most important factor in considering a portrait successful or not. By observing the unique qualities of the individual, I am able (hopefully) to render a realistic depiction beyond mere likeness. One of my favorite ways to do this is through exaggerated form; the slightest push of an expression or posture, in just the right place, can tell the viewer quite a bit. Engineering Bridges that Are Alive Home | About Us | Contact | Subscribe Bridges that Are Alive Ingenuity of the Indigenous People Meghalaya, India In Northeast India, a giant cliff leads up into Meghalaya.

Eco-city Inside a One Kilometer Crater in Siberia Eco-city 2020 is a proposal for the rehabilitation of the Mirniy industrial zone in Eastern Siberia, Russia designed by the innovative architectural studio AB Elis Ltd. The project would be located inside a giant man-made crater of more than one kilometer in diameter and 550 meters deep that used to be one of the world’s largest quarries. The idea is to create a new garden city that will be shielded from the harsh Siberian environmental conditions characterized by long and severe winters and short hot summers. The new city would attract tourists and residents to Eastern Siberia and would be able to accommodate more than 100,000 people. The new city is planned to be divided in 3 main levels with a vertical farm, forests, residences, and recreational areas. On of the most interesting aspects of the proposal is the glass dome that will protect the city and would be covered by photovoltaic cells that will harvest enough solar energy for the new development.

The Luxury Dhigu Resort, Maldives « Luxury Furniture, Property, Travel & Interior Design The luxury Dhigu Resort, Maldives Anantara Dhigu Resort & Spa is encircled by mystic lagoons and unspoilt crystal shores, the resort is a heavenly sanctuary on a secluded paradise island, offering barefoot elegance in one of the world’s most celebrated tropical havens. Here the sparkling turquoise waters of the Indian Ocean offer an endless horizon of aquatic allure and the evocative location is matched by a tranquil island design style. Anantara Dhigu is a luxurious five-star resort hidden on tropical terrain on Dhigufinolhu Island in the Maldives’ South Male Atoll, a mere 35 minute speedboat journey from the island nation’s international airport, or a scenic five minutes by private chartered seaplane. Male-based architect Mohamed Shafeeq from Group X Design Associates and Thailand-based interior design company, Abacus, headed by John Lightbody, have styled the resort’s distinctive environment as a creative complement to the natural beauty of the island. Anantara Dhigu, P.O.

The Sifter's Top 10 Homes of 2010 If you’re a regular reader of the Sifter you’re familiar with my real estate fascination. I love posting all types of homes. From the unique and interesting to the grand and opulent. Below you will find a collection of the Sifter’s Top 10 Homes from 2010. Click any picture or link to be taken to the original post, enjoy! $300 Geopolymer Earthbag Dome / 'The $300 House' Challenge for $300 House other researchers at the Geopolymer Institute. Ive been investigating the potential of using geopolymer cast stone as a low cost, durable fill material in earthbag houses and reporting my findings on our Earthbag Building Blog. The basic process is quite simple. The ancients used limestone, kaolin clay, sodium carbonate, lime and water to make cast stone in situ.

Hong Kong in Pictures Hong Kong by limaoscarjuliet, on Flickr Josh Aggars of flip flops city shares his experience and photos trying to navigate his way around the wonders of Hong Kong. Full of street food restaurants and market stalls. I arrived to Hong Kong, China groggy and tired after a 13 hour flight and had a wander around. The area was packed full of natives and backpackers all eating and drinking. It was your typical bustling market atmosphere with Chinese and western music pumping out in equal measure. Travel Guides, Luxury Travel and Travel Info Bran Castle situated near Bran and in the immediate vicinity of Bra?ov, is a national monument and landmark in Romania. The fortress is situated on the border between Transylvania and Wallachia, on DN73. Commonly known as “Dracula Castle” (although it is one among several locations linked to the Dracula legend, including Poienari Castle and Hunyad Castle), it is marketed as the home of the titular character in Bram Stoker’s Dracula. There is, however, no evidence that Stoker knew anything about this castle.

EarthShips Imagine living in a house built out of tin cans, tires and other various recycled materials. Oh yeah, did I mention they are totally off the grid and you can grow your own food right in your house? If you think that sounds like a good way to live, check out some of these people who have decided to make Earthships their permanent homes. Additional Information & Resources: 22 Incredible Photos of Faraway Places Thailand Chances are you already know Steve McCurry as the man who took one of the most iconic photos of our time. It was of a 12-year-old Afghan refugee girl who's piercing green eyes told us her harrowing story. The image itself was named "the most recognized photograph" in the history of the National Geographic magazine and her face became famous as the cover photograph on their June 1985 issue.