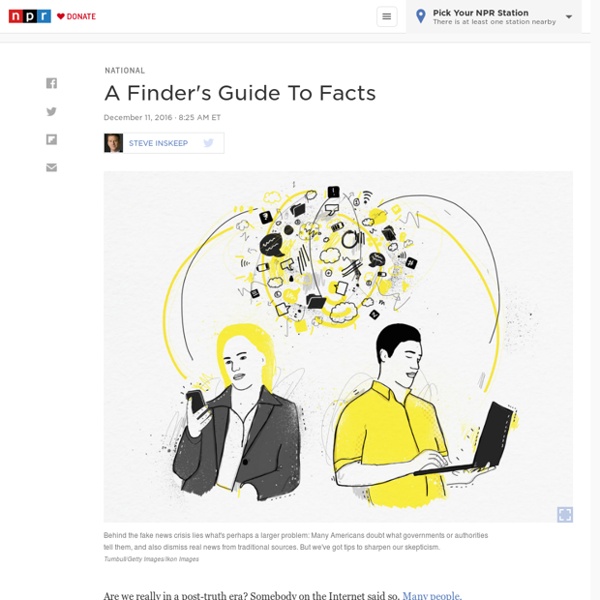 Huge MIT Study of ‘Fake News’: Falsehoods Win on Twitter Ultimately, they found about 126,000 tweets, which, together, had been retweeted more than 4.5 million times. Some linked to “fake” stories hosted on other websites. Some started rumors themselves, either in the text of a tweet or in an attached image. (The team used a special program that could search for words contained within static tweet images.) And some contained true information or linked to it elsewhere. Then they ran a series of analyses, comparing the popularity of the fake rumors with the popularity of the real news. Speaking from MIT this week, Vosoughi gave me an example: There are lots of ways for a tweet to get 10,000 retweets, he said. Meanwhile, someone without many followers sends Tweet B. Tweet A and Tweet B both have the same size audience, but Tweet B has more “depth,” to use Vosoughi’s term. Here’s the thing: Fake news dominates according to both metrics. These results proved robust even when they were checked by humans, not bots.

Fake News Antidote: Teaching Kids To Discern Fact From Fiction : NPR Ed By now, you've probably heard about one very real consequence of fake news — the infamous "pizzagate" conspiracy theory that ended with Edgar Welch, 28, firing a real gun inside a real Washington, D.C., pizzeria filled with real people. When The New York Times later asked Welch what he thought when he realized there were no child slaves inside the restaurant, as one fake news story had led him to believe, he responded: "The intel on this wasn't 100 percent." Welch isn't the only one struggling to tell fact from fiction in this digital age. A recent Stanford study found that America's middle, high school and college students are shockingly bad at it, too. "How do they become prepared to make the choices about what to believe, what to forward, what to post to their friends," Wineburg asked on NPR's All Things Considered, "when they've been given no practice in school?" And he's right. "Like a flu in the winter" Hunt teaches U.S. and Virginia government. Cooper labels the story "fiction."

Identify Bias - How to Evaluate Information Sources - ResearchGuides at New Jersey Institute of Technology Why should we check the bias of information on a web page? Would you trust information unsupported by facts or logical reasoning? A biased author may not pay attention to all the facts or develop a logical argument to support his or her opinions. Bias is when a statement reflects a partiality, preference, or prejudice for or against a person, object, or idea. Much of what you read and hear expresses a bias. What facts has the author omitted? Biased information tries to change your mind, how you think. What are some indicators of bias on a web page? The language of the document is often extreme; statements have all or nothing connotations. You should expect bias on webpages that are dedicated to selling you something. Questions to keep in mind as you seek indicators of bias: What is the author's political point of view? Authored by Lora K.

Did Media Literacy Backfire? - Data & Society: Points Update: On March 9, 2018, I gave a talk expanding on my ideas in this post after a year of reflection/research. You can read the talk crib and watch the video at here: “You Think You Want Media Literacy…. Do you?” Anxious about the widespread consumption and spread of propaganda and fake news during this year’s election cycle, many progressives are calling for an increased commitment to media literacy programs. Others are clamoring for solutions that focus on expert fact-checking and labeling. I remember a casual conversation that I had with a teen girl in the midwest while I was doing research. For years, that casual conversation has stuck with me as one of the reasons that we needed better Internet-based media literacy. Understanding what sources to trust is a basic tenet of media literacy education. Students are also encouraged to reflect on economic and political incentives that might bias reporting. Combine this with a deep distrust of media sources. The path forward is hazy.

The Psychology Behind Fake News It’s hard to venture online these days—or switch on any cable network—without coming across a heated discussion over “fake news.” Basic facts and figures, ranging from crowd sizes to poll numbers to whether or not it rained, now appear to be under negotiation. For many media consumers, it can feel as if we are living through an entirely new dystopian era, with each news cycle or press conference sending us further down the rabbit hole. But although the term “fake news” reflects our troubled political moment, the phenomenon is nothing new, and neither is the psychology that explains its persistence. “There’s a tendency for people to say, ‘Well, given the social media channels we have now, these things can spread more quickly and have a greater effect than ever before,” says Adam Waytz, an associate professor of management and organizations at the Kellogg School. “There’s an assumption that fake news exacerbates polarization,” Waytz says. The Many Flavors of Truth A Possible Solution

Stanford|Welcome to the Virtual Crash Course in Design Thinking Welcome to the d.school’s Virtual Crash Course resource page! We know not everyone can make a trip to the d.school to experience how we teach design thinking. So, we created this online version of one of our most frequently sought after learning tools. Using the video, handouts, and facilitation tips below, we will take you step by step through the process of hosting or participating in a 90 minute design challenge. If you choose to participate, in 90 minutes you will be taken through a full design cycle by participating in The Gift-Giving Project. Through this experience we hope you will take away some of the basic principles of Design Thinking and start to adapt them into your personal and professional routines. Below, you will find three sections: Gear Up!

Can Your Students Recognize Bias? 7 Tips for Teaching Media Literacy In today’s environment, media literacy is more important than ever. But the sparse research on the topic shows us that kids really struggle with identifying legitimate sources. This Stanford study found that 82 percent of middle school students couldn’t distinguish between a news story and one labeled as sponsored content. So how can teachers help? 1. Put your students in groups and ask them to discuss the following questions: What is fake news? Just because the terms “fake news” and “news bias” are all over the news media doesn’t mean that your students know what they mean or why they matter. 2. Show your students the website All About Explorers: Christopher Columbus and ask them to locate information about him. 3. Instead of relying on their own knowledge, ask students to cross-check the information they found with a more reliable website. How do you know when a source is reliable? Have students Google whether a source is considered to have a liberal or conservative bias. 4. 5. 6. 7.

Meaning: Notes from Session 12 of TED2019 Eric Liu asks us to commit to being active citizens — wherever we are. He speaks at TED2019: Bigger Than Us, on April 19, 2019, in Vancouver, BC, Canada. Photo: Ryan Lash / TED The final session of TED2019 was a spectacle. The event: Talks and performances from TED2019, Session 12: Meaning, hosted by TED’s Chris Anderson, Helen Walters and Kelly Stoetzel When and where: Friday, April 19, 2019, 9am, at the Vancouver Convention Centre in Vancouver, BC Speakers: Eric Liu, Yeonmi Park, Suleika Jaouad, David Brooks, America Ferrera, Bina Venkataraman Music: Richard Bona on guitar Mindblowing, completely improvised wrap-up covering the whole week: Freestyle Love Supreme: Anthony Veneziale, Chris Jackson, Chris “Shockwave” Sullivan, Utkarsh Ambudkar, Arthur Lewis The talks in brief: Eric Liu, author and CEO of Citizen University Big idea: Instead of feeling despair at the state of the world, we need to commit to living as active, responsible citizens of our societies.How?

'Fiction is outperforming reality': how YouTube's algorithm distorts truth It was one of January’s most viral videos. Logan Paul, a YouTube celebrity, stumbles across a dead man hanging from a tree. The 22-year-old, who is in a Japanese forest famous as a suicide spot, is visibly shocked, then amused. “Dude, his hands are purple,” he says, before turning to his friends and giggling. Paul, who has 16 million mostly teen subscribers to his YouTube channel, removed the video from YouTube 24 hours later amid a furious backlash. The next day, I watched a copy of the video on YouTube. The answer was a slew of videos of men mocking distraught teenage fans of Logan Paul, followed by CCTV footage of children stealing things and, a few clicks later, a video of children having their teeth pulled out with bizarre, homemade contraptions. I had cleared my history, deleted my cookies, and opened a private browser to be sure YouTube was not personalising recommendations. “I’m going to post it on YouTube,” said a teenage girl, who sounded like she might be an older sibling.

Edutopia|Solving Real-World Issues Through Problem-Based Learning In Tomasko’s problem-based unit covering Jamestown, her class looked through primary resources like John Smith’s diary. They discussed representation and how all the primary resources are from the English settlers. Tomasko recalls one of her students asking, “‘Out of all the cultures in the world, which culture do you think needs to have its story told more and have its voice heard?’ I was blown away. That’s not typical fourth-grade thinking, but she was clearly thinking through these ideas in a deep way and wondering how [they] can apply to other things.” 1. What content and skills do my students need to learn? “Once you have those big pieces in place, you can start to plan: ‘What are the day-to-day things that I'm going to do to get them to face that problem and then move towards an ultimate solution?’” 2. First-grade students roamed school fields to investigate spiders. 3. 4. 5. Instead of giving your students directions for an in-class assignment, ask them what they should do. 6.