Unlocking the Mysteries of The Artistic Mind 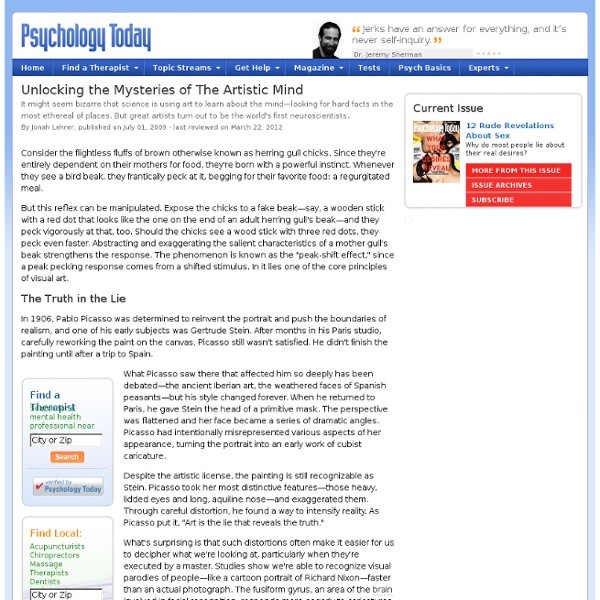 Consider the flightless fluffs of brown otherwise known as herring gull chicks. Since they're entirely dependent on their mothers for food, they're born with a powerful instinct. Whenever they see a bird beak, they frantically peck at it, begging for their favorite food: a regurgitated meal. But this reflex can be manipulated. Expose the chicks to a fake beak—say, a wooden stick with a red dot that looks like the one on the end of an adult herring gull's beak—and they peck vigorously at that, too. The Truth in the Lie In 1906, Pablo Picasso was determined to reinvent the portrait and push the boundaries of realism, and one of his early subjects was Gertrude Stein. What Picasso saw there that affected him so deeply has been debated—the ancient Iberian art, the weathered faces of Spanish peasants—but his style changed forever. Despite the artistic license, the painting is still recognizable as Stein. Reverse-Engineering the Mind Related:  Creativity

Paternal Influence on Gifted Males Hammond, D.R., Hébert, T.P., & Pagnani, A.R. Journal for the Education of the Gifted Prufrock Press Vol. 33, No. 2, pp. 241–274 2009 This study examines the father-son relationships of 10 prominent gifted men of achievement to identify factors influencing talent development. Through biographical analysis, 6 significant themes were identified: unconditional belief in son, strong work ethic, encouragement and guidance, maintaining high expectations and fostering determination, pride in son’s accomplishments, and mutual admiration and respect. “My father didn’t tell me how to live; he lived and let me watch him do it.” It is a challenging time to be a boy in this country. While concerns about boys are becoming part of the national conversation, a parallel phenomenon is evolving. Although the dialogue regarding the problems facing boys and the role their fathers should play in their lives continues, little attention is being drawn to issues specifically facing gifted young men. Findings

The Nature Of Genius Genius by L. James Hammond [link to www.ljhammond.com] 1. 2. There have been a few versatile geniuses, such as Leonardo and Pascal, but it’s very unusual for a person to have more than one kind of genius. 3. 4. Many geniuses emerged from families that had been successful in practical affairs, and then had declined in vigor and strength. In Wittgenstein’s family, one finds the same combination of business success and mental instability; Wittgenstein’s father was a steel magnate, one of the richest men in Europe, but three of Wittgenstein’s brothers committed suicide. The best solution to the problem of the origin of genius is a solution that combines Schopenhauer’s theory with Abraham’s theory. While genius inherits certain virtues and talents, it usually bequeaths little. 5. 6. 7. Throughout his life, Hitler acted like one who was the agent of fate. Hitler relied on his unconscious to reveal what was fated to occur; he relied on hunches and intuitions. 8. 9. 10. 11. 12. 13. 14. 15. 16.

Exquisite Minds: Gifted and Creative Children | Exquisite Minds: Gifted and Creative Children « Support for Educators and Parents of Gifted and Creative Children "The problems that exist in the world today cannot be solved by the level of thinking that cr Artistic Anatomy Is learning to draw anatomy in a classroom more secure (since there is a teacher to check the work and possibly a book to study from) in practicing artistic anatomy drawing, or should artists focus on just practicing from images on websites/blogs like this tumblr? Asketh - pjmx24 Depending on the size of your class and where you are, your teacher can be a great guide to help you and show you what areas you need to focus on more to improve and give you good material to work from! If your class size is too big (ideally a class of no more than 15 is optimal for a teacher to give extensive feedback to all students) you might not get enough feedback to really improve as much as possible to your full potential. Outside of class (or if you have no class) you should focus on drawing in a sketchbook dedicated for life drawing/anatomy. Hope that gives you some insight!

Beauty and the Brain Illustration by Gluekit Why is something beautiful? David Hume argued that beauty exists not in things but “in the mind that contemplates them.” And everyone has at some point heard the old saw that beauty is in the eye of the beholder. The first studies of aesthetics and the brain began with the sort of self-experimentation that science doesn’t encourage anymore. The “uglier” a painting, the greater the motor cortex activity, as if the brain was preparing to escape. Such investigations of the biology of aesthetics, however, had heretofore not been anyone’s primary research focus; rather, the investigations have been subordinated to some other work, such as modelling the visual system. Zeki’s work has been ongoing for several years. Richard Morris, head of neuroscience and mental health at the Wellcome Trust, says Zeki’s work “gives insight into what it is to be human.” As for architecture, altering space can have a large impact on brain function.

Gender and Genius Kerr, B. Center for Gifted Education The College of William & Mary This article by Barbara Kerr discusses what has shaped modern gender identity in the Western world. She also examines its implication on gifted young people. Our ideas about what is gifted behavior for a boy or for a girl are imbued with society's notions of appropriate gender identity. Sigmund Freud's (1933) theory of gender identity development is still one of the most influential theories, despite its lack of empirical support. Freud also gave us the idea that girls and women are incomplete men. Despite the hostility with which the psychoanalytic establishment greeted disagreement, Karen Horney (1939) disputed this model of gender identity development. I would not go into such detail here about a theory which has received little support and which has been thoroughly disproven if it had not had such profound influence on the ways in which we teach and guide gifted boys and girls. For girls, the pattern is different.

The intellectual and psychosocial nature of extreme giftedness Powell, P. & Haden, T. Roeper Review Volume 6, No. 3, pp. 131--133 February 1984 This article by Philip Powell and Tony Haden compares the differences of average, moderately and extremely gifted individuals. The authors explore the psychological difficulties of the highly gifted, especially in terms of self-esteem and self-conception. The article discusses the difficulties the extremely gifted have in obtaining consistent, accurate and valid feedback in regard to their self-concept. The information provided has implications for educators, parents, and psychologists. The highly gifted create structure, generate ideas, and efficiently process information in ways that are qualitatively superior to moderately gifted and average ability individuals. The highly gifted are rare in the population. General intelligence Desire to know Originality Common sense Torrance (1965) has argued that the gifted are independent thinkers. Another important difference is in the desire to know complex ideas.

Understanding Giftedness Who are the Gifted? You may be wondering whether or not your child is gifted, or whether you yourself are gifted. It is especially confusing since there are many definitions of giftedness, and many characteristics associated with giftedness. Categories of definitions generally include IQ definitions (usually 125 or 130 cutoff), percentage of population definitions (ranging from the top 1% to the top 15%), talent definitions (music, science, leadership, etc and creativity definitions (based on creative products or creativity tests). Here's one simple way to think about the definition: "If a child is gifted, one or more of the following phrases will most likely describe their gifts and talents: the gifts and talents are comparatively rare, appear considerably earlier, and/or are significantly more advanced." The following description of giftedness speaks of asynchronous development: The good news about the passage of this law is that Vermont officially recognizes that gifted children exist.

Quickposes: pose generator for figure & gesture drawing practice Wired 13.02: Revenge of the Right Brain Logical and precise, left-brain thinking gave us the Information Age. Now comes the Conceptual Age - ruled by artistry, empathy, and emotion. By Daniel H. PinkPage 1 of 2 next » When I was a kid - growing up in a middle-class family, in the middle of America, in the middle of the 1970s - parents dished out a familiar plate of advice to their children: Get good grades, go to college, and pursue a profession that offers a decent standard of living and perhaps a dollop of prestige. Story Tools Story Images Click thumbnails for full-size image: Tax attorneys. But a funny thing happened while we were pressing our noses to the grindstone: The world changed. Scientists have long known that a neurological Mason-Dixon line cleaves our brains into two regions - the left and right hemispheres. Until recently, the abilities that led to success in school, work, and business were characteristic of the left hemisphere. OK. The effect: the scales tilting in favor of right brain-style thinking. Asia

Creativity across the life-span: A systems view Csikszentmihalyi, M. Talent Development III, pp. 9-18 Gifted Psychology Press 1995 This article by Mihaly Csikszentmihalyi looks at three major issues related to creativity over a lifespan. They are: what can be learned about creativity; a model of optimal aging; and how to work with creative children. The author based this work on six years of interviews with scores of older adults who are still actively creative. I am going to talk about a set of studies on creativity which focuses on adults and which will result in a book scheduled to appear next year (Csikszentmihalyi, 1996). Most of you are interested in creativity in children, and of course that makes sense, because that's where the long process of creative development begins. In this paper, I want to bring up three major issues, which are among the topics of our study. The third issue is to use what we have learned about creativity in later life as a model for how to deal with creative children.

Thinking like a genius: overview Thinking and recall series Problem solving: creative solutions "Even if you're not a genius, you can use the same strategies as Aristotle and Einstein to harness the power of your creative mind and better manage your future." The following strategies encourage you to think productively, rather than reproductively, in order to arrive at solutions to problems. "These strategies are common to the thinking styles of creative geniuses in science, art, and industry throughout history." Nine approaches to creative problem solving: Rethink! Exercise #2 illustrates how famous thinkers used these approaches. Exercise #1: illustrates applications of the nine approaches. Text of exercise:Nine approaches to creative problem solving: Rethink! Thinking and recall series

Intellectual Giftedness Intellectual giftedness, often referred to as high IQ, is usually given short shrift when it comes to considerations of the special needs of exceptional people. Because giftedness appears on the surface to be nothing but an advantage, the challenges it presents are often ignored and unknown. Giftedness is not about being better, it's about being *different*. I'm of the opinion that, despite our desire for simple quantification of intelligence, noting characteristics of giftedness is perhaps a more useful, or at least complementary, method of detecting the intelligent. Energy Curiousity Speed Concentration Sensitivity, empathy, insight and intuition Sophistication of thinking, highly developed moral sense Nonconformist/Independent Persistence Humour Uses up jobs Almost all those characteristics, while pretty general, are present in every really smart person I know.