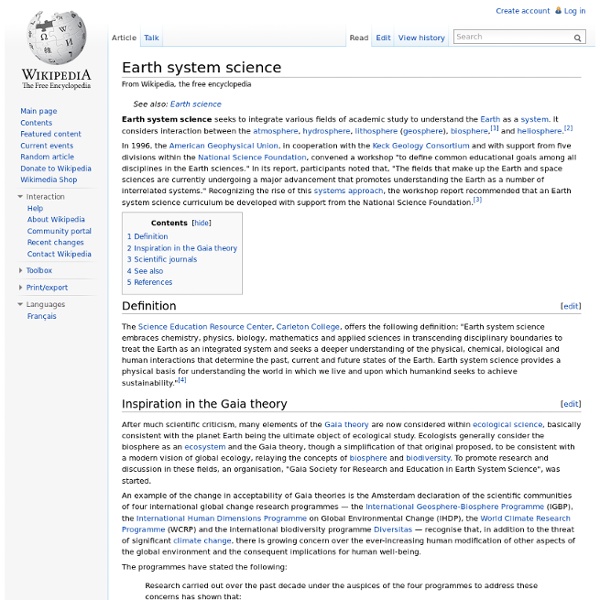 Earth system science seeks to integrate various fields of academic study to understand the Earth as a system. It considers interaction between the atmosphere, hydrosphere, lithosphere (geosphere), biosphere,[1] and heliosphere.[2] In 1996, the American Geophysical Union, in cooperation with the Keck Geology Consortium and with support from five divisions within the National Science Foundation, convened a workshop "to define common educational goals among all disciplines in the Earth sciences." In its report, participants noted that, "The fields that make up the Earth and space sciences are currently undergoing a major advancement that promotes understanding the Earth as a number of interrelated systems." Recognizing the rise of this systems approach, the workshop report recommended that an Earth system science curriculum be developed with support from the National Science Foundation.[3] Definition[edit] Inspiration in the Gaia theory[edit] The programmes have stated the following:

Richard Dawkins English ethologist, evolutionary biologist, and author Richard Dawkins FRS FRSL (born Clinton Richard Dawkins; 26 March 1941)[24] is a British ethologist, evolutionary biologist, and author. He is an emeritus fellow of New College, Oxford, and was the University of Oxford's Professor for Public Understanding of Science from 1995 until 2008. Dawkins first came to prominence with his 1976 book The Selfish Gene, which popularised the gene-centred view of evolution and introduced the term meme. With his book The Extended Phenotype (1982), he introduced into evolutionary biology the influential concept that the phenotypic effects of a gene are not necessarily limited to an organism's body, but can stretch far into the environment. In 2006, he founded the Richard Dawkins Foundation for Reason and Science. Dawkins is known as an outspoken atheist. Background[edit] Early life[edit] Education[edit] Teaching[edit] Work[edit] Evolutionary biology[edit] Fathering the meme[edit] Foundation[edit] Media[edit]

James Lovelock James Ephraim Lovelock, CH, CBE, FRS[2] (born 26 July 1919) is an independent scientist, environmentalist and futurist who lives in Dorset, England. He is best known for proposing the Gaia hypothesis, which postulates that the biosphere is a self-regulating entity with the capacity to keep our planet healthy by controlling the interconnections of the chemical and physical environment.[5] Biography[edit] Career[edit] James Lovelock around 1960 A lifelong inventor, Lovelock has created and developed many scientific instruments, some of which were designed for NASA in its program of planetary exploration. In early 1961, Lovelock was engaged by NASA to develop sensitive instruments for the analysis of extraterrestrial atmospheres and planetary surfaces. Lovelock was elected a Fellow of the Royal Society in 1974. On 8 May 2012, he appeared on the Radio Four series "The Life Scientific", talking to Jim al-Khalili about the Gaia hypothesis. CFCs[edit] Gaia[edit] Nuclear power[edit] Climate[edit]

Neuroanatomy Anatomy of the human brain. Neuroanatomy is the study of the anatomy and stereotyped organization of nervous systems. In contrast to animals with radial symmetry, whose nervous system consists of a distributed network of cells, animals with bilateral symmetry have segregated, defined nervous systems, and thus we can make much more precise statements about their neuroanatomy. For information about the composition of animal nervous systems, see nervous system. History[edit] The first known written record of a study of the anatomy of the human brain is the ancient Egyptian document the Edwin Smith Papyrus.[1] The next major development in neuroanatomy came from the Greek Alcmaeon, who determined that the brain and not the heart ruled the body and that the senses were dependent on the brain.[2] Composition[edit] At the tissue level, the nervous system is composed of neurons, glial cells, and extracellular matrix. Orientation in neuroanatomy[edit] Tools[edit] Cell Staining[edit]

Ethology Ethology (from Greek: ἦθος, ethos, "character"; and -λογία, -logia, "the study of") is the scientific and objective study of animal behaviour, and is a sub-topic of zoology. The focus of ethology is on animal behaviour under natural conditions,[1] as opposed to behaviourism, which focuses on behavioural response studies in a laboratory setting. Many naturalists have studied aspects of animal behaviour throughout history. The modern discipline of ethology is generally considered to have begun during the 1930s with the work of Dutch biologist Nikolaas Tinbergen and by Austrian biologists Konrad Lorenz and Karl von Frisch, joint winners of the 1973 Nobel Prize in Physiology or Medicine.[2] Ethology is a combination of laboratory and field science, with a strong relation to some other disciplines such as neuroanatomy, ecology, and evolution. The desire to understand animals has made ethology a rapidly growing field. Etymology[edit] Relationship with comparative psychology[edit] Instinct[edit]