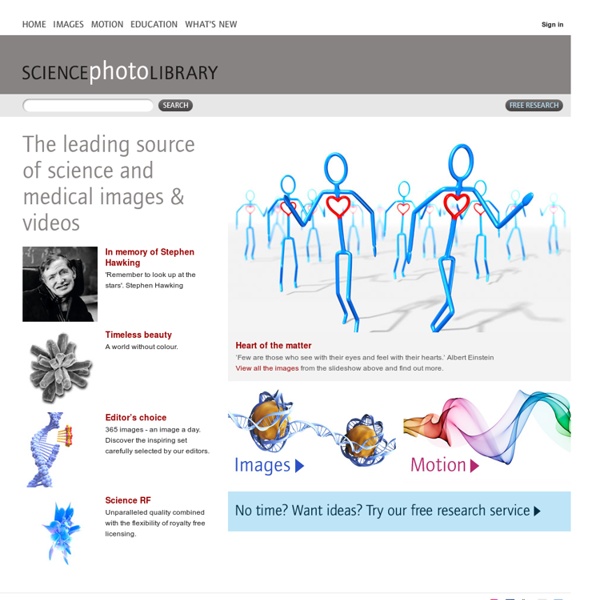 Making Science Visible English Monarchs - A complete history of the Kings and Queens of England. Peveto Turns Shipping Crates Into Awesome Industrial-style Furniture Peveto transforms shipping crates into awesome new chairs, wine racks, side tables, and more at their art gallery in Houston, Texas. Built to reduce waste and provide function within a stylish new form, these pieces are perfect for anyone who enjoys an industrial or rustic aesthetic. If you happen to be in Houston, stop by the Peveto to see the creator and artist, Felipe Contreras, build the furniture right in the gallery! + Peveto The article above was submitted to us by an Inhabitat reader. Want to see your story on Inhabitat?

DnaTube.com - Scientific Video Site Scientific Photography Scientific photography is about visualizing things that can't be seen with the unaided eye. It is used to describe natural and man-made phenomena in a way that clarifies, educates, and illuminates. Through scientific photography, we can describe things to other scientists, but also to the public, which in many cases supports the research with its tax money. Science photography that is beautiful and otherwise aesthetically pleasing is able to capture the imagination of the viewer to a degree unlike any other style of photography. Something about images of things never scene before: witness the fascination with the remarkable space photographs brought back by the Hubble telescope. Scientific photographs address a deep human need to explore, to push frontiers, and to answer fundamental questions about the world around us.

Science Photography Spotlight On January 7, 1839, an installation artist and chemist named Louis-Jacques-Mandé Daguerre announced to the French Academy of Sciences in Paris that he had perfected a photographic imaging technology that could be used on a large scale and was reproducible. His invention, later named the daguerreotype, was based on a special property of silver iodide: when exposed to light, the molecules undergo a chemical transformation that can be turned into charcoal-colored shadows and lines when later exposed to developing mercury fumes. The more intense the light, the darker the resulting silver-mercury amalgam. When a sheet of metal copper coated with silver iodide, for instance, was exposed to a street scene for a prolonged period, an image of the street was represented on the daguerreotype plate as lines and shadows of varying brightness. Daguerre initially thought his invention would be suitable mostly for personal use in travel logs, art installations, and architectural records.

Special Report - International Science and Engineering Visualization Challenge Thank you for your interest in the International Science & Engineering Visualization Challenge. We are in the process of restructuring the Visualization Challenge. We will begin accepting entries in September 2014. Please visit this site periodically for updates. Some of science's most powerful statements are not made in words. From DaVinci's Vitruvian Man to Rosalind Franklin's X-rays, science visualization has a long and literally illustrious history. Compound Eye: the many facets of science photography A compound eye is a visual sensory organ composed of numerous small lenses. This charming South American grasshopper sports an especially large pair. Welcome to Compound Eye, a Scientific American photography blog!