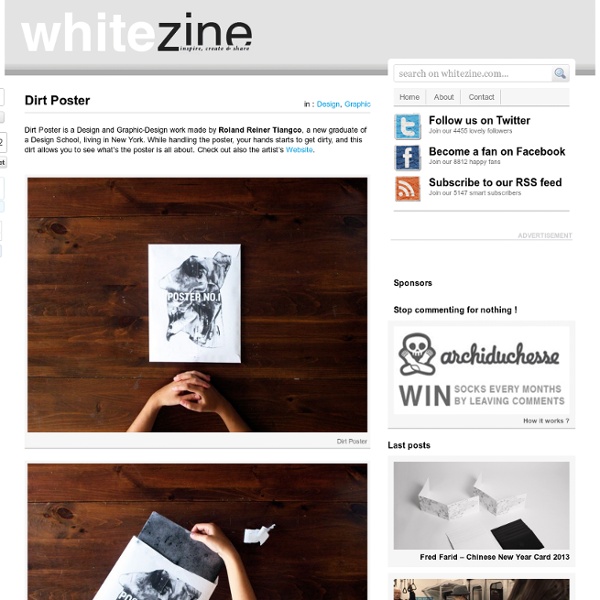 Dirt Poster is a Design and Graphic-Design work made by Roland Reiner Tiangco, a new graduate of a Design School, living in New York. While handling the poster, your hands starts to get dirty, and this dirt allows you to see what’s the poster is all about. Check out also the artist’s Website. Dirt Poster

How to Memorize - Learn to memorize and increase memory If you are visiting from StumbleUpon and like this article and tool, please consider giving it a thumbs up. Thanks! Memorizing does not have to be as hard as most people make it. The problem is that most people only know how to memorize by reading the same thing over and over again. You have to learn to memorize. In this post we are going to look at how the brain remembers and then show how to use that knowledge to come up with a method for memorizing verbatim text. Conceptual Framework for Online Identity Roles I just wrapped up a final project for an aesthetics course this semester, the assignment being to create a “Database of the Self.” I chose to make the database as a representation of the roles we play in terms of how we interact with information online. The roles are overlaid on a panarchy, which shows a visualization of adaptive lifecycles. Though the evolution of every idea or meme won’t necessarily follow this specific path, (it may in fact be rhizomatic, with multiple feedback loops), this begins to flesh out what we become as nodes within an enmeshed series of networks. The cycle can be thought to begin with the “Activators,” in the lower right side of image. For an interactive version of the graphic, click here.

Beautiful/Decay Artist & Design Gabriel Moreno does beautiful work with such basic materials: a pen and a brush. His illustrations begin in black and white, upon which Moreno builds, adding layers of color and images of other places and people tattooed into their skin. Flowers, birds, and faces organically expand from his subjects, as if a rush of creativity, or a dream, is escaping them. 100 Exquisite Adjectives By Mark Nichol Adjectives — descriptive words that modify nouns — often come under fire for their cluttering quality, but often it’s quality, not quantity, that is the issue. Plenty of tired adjectives are available to spoil a good sentence, but when you find just the right word for the job, enrichment ensues. Practice precision when you select words. Here’s a list of adjectives:

CNC Gears CNC Gears Last updated on Thursday, March 24, 2011 05:51:48 AM Eastern US Time Zone Gear Wheel Designer, Deadbeat Escapement, Involute Gears, Mach3, Involute Gear CuttersRange of Cutters, Basic Gear Formulae, Module Tooth Dimensions, Common Clock Trains Gear Wheel Designer Cycloidal gear. Gear Wheel Designer software creates a variety of clock gear types & generates the g-code. 20+ Tools to Create Your Own Infographics A picture is worth a thousand words – based on this, infographics would carry hundreds of thousands of words, yet if you let a reader choose between a full-length 1000-word article and an infographic that needs a few scroll-downs, they’d probably prefer absorbing information straight from the infographic. What’s not to like? Colored charts and illustrations deliver connections better than tables and figures and as users spend time looking back and forth the full infographic, they stay on the site longer.

A Butterfly Effect Art Print by Norman Duenas New All « PrevNext » « Prev1234 ... 80Next » Judith Ann Braun's Fingers Are Magical With an art career spanning more than three decades, Judith Ann Braun has tested the limits of her artistic musculature. She began as a self-described “realistic figure painter,” and worked through the struggles common to anyone who endeavors upon an artistic pursuit, that of searching for one’s own voice in the chosen medium. Fast forward to the 21st century where the evolution of Braun’s work has brought us to the Fingerings series, a collection of charcoal dust landscapes and abstracts “painted” using not brushes but her fingertips. Flightradar24.com - Live flight tracker! In order to save data consumption Flightradar24 web page times out after 30 minutes. Please reload the web page to get another 30 minutes. or get a Flightradar24 Premium subscription and Flightradar24.com will not time-out again!

Computer passes Turing test 9 June 2014Last updated at 08:36 ET Eugene Goostman simulates a 13-year-old Ukrainian boy A computer program called Eugene Goostman, which simulates a 13-year-old Ukrainian boy, is said to have passed the Turing test at an event organised by the University of Reading. The test investigates whether people can detect if they are talking to machines or humans. The experiment is based on Alan Turing's question-and-answer game Can Machines Think?

Thermocouples Made From Ordinary Copper and Steel Wire Thermocouple loop made into a coil can deflect a compass needle. DC current probe meters are certainly not found everywhere but a compass can be used to indicate current flow by making the thermocouple loop into a coil. This coil uses 5 feet of copper wire but the use of 12 gauge keeps the resistance low enough for observable current to flow. The compass needle is most easily deflected when it is perpendicular to the coil axis as shown in the above picture. A piece of tissue paper was placed over the mirror in the compass case to eliminate lighting glare while taking the photographs. A flame held under one junction will cause an easily observable deflection of the compass needle.