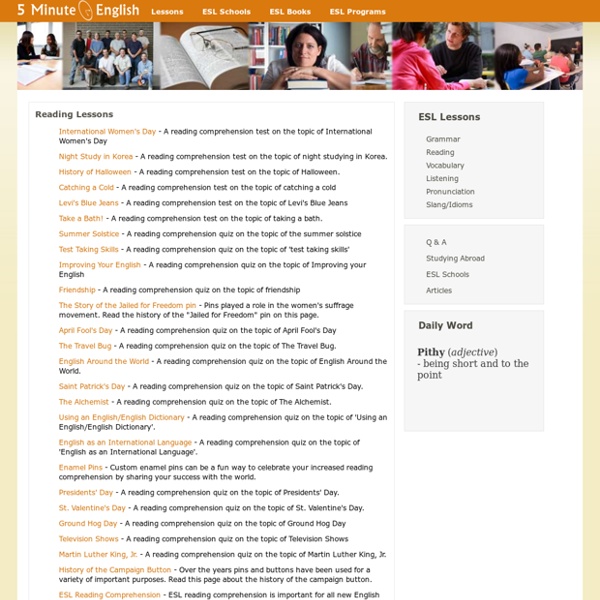 25 Terrific Online Games for English Language Learners - Online College Courses English language learners fall into two categories — native speakers and those pursuing it via ESL/EFL instruction (or self-instruction!). But both demographics can build up their skills, no matter their age or proficiency, through game-based learning. The Internet, in its infinite providence, does not disappoint when it comes to hosting effective resources for teaching and reviewing the core components of the English language. Here’s a few particularly useful games or, more accurately in most cases, suites of games. GameZone: Dozens of simple, straightforward games about grammar, spelling, and vocabulary reach out to English language learners at all levels.

Reading - Intermediate Reading Comprehension - "Learning English" Read this short text about learning English, then answer the multiple-choice questions. Exercise Number: 3R1 The Alien Story Read this story about a credible UFO sighting - and then put the pieces of the story into the correct order. Exercise Number: 3R2 Changes In Town Read how Jake's town has changed recently, then answer true/false questions. Activities for children Each activity will help children practise at least one of the skills we test in our Cambridge English: Young Learners tests – reading and writing, listening or speaking. They also include words taken from the word lists used to create these exams. The activities are divided into levels taken from the Common European Framework of Reference for Languages (CEFR). As children move through the levels in this section, the activities will start to get more difficult. If you’re not sure what level your child is at, it may be a good idea to start with the pre-A1 level activities.

Expressions for Agreeing and Disagreeing This page is about words and phrases that we use when we agree or disagree with someone in English. Stating an opinion In my opinion...The way I see it...If you want my honest opinion....According to Lisa...As far as I'm concerned...If you ask me... Reading Comprehension Worksheets "Your reading comprehension materials are the best I've found on the web. They are so thorough and comprehensive! My students and I have learned a lot from them. Thanks so much!" -- Susan B., Carter, KY. 03/21/12 Like these materials?

800 Free eBooks for iPad, Kindle & Other Devices Download 800 free eBooks to your Kindle, iPad/iPhone, computer, smart phone or ereader. Collection includes great works of fiction, non-fiction and poetry, including works by Asimov, Jane Austen, Philip K. Dick, F. Video Games By Kenneth Beare Updated February 15, 2016. If there is one thing that young English learners and ESL classes have in common around the world, it's their passion for playing video games. It doesn't matter what platform they use: Playstation 2, XBox, GameBoy or Nitendo - and especially smart phones, they love to play and talk about playing. Taking cue from this passion for video games, this lesson is devoted to getting them to talk about video games - but in English! Aim: Getting students to talk, learning new vocabulary