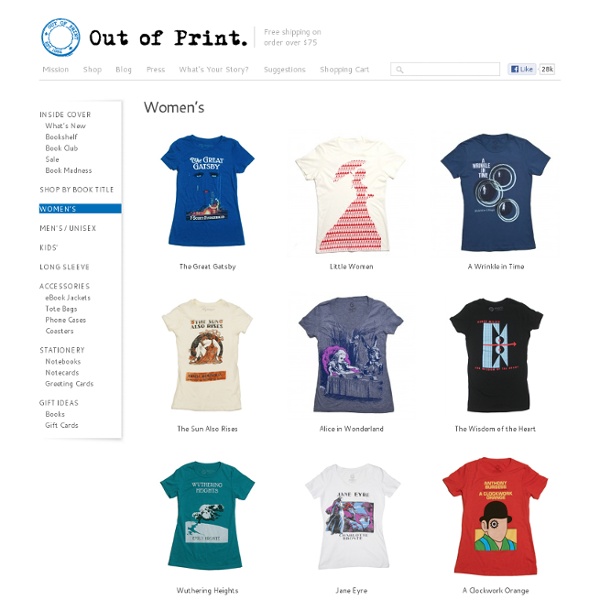 Hot Topic NO PURCHASE NECESSARY TO ENTER OR WIN A PRIZE. A PURCHASE WILL NOT IMPROVE YOUR CHANCE OF WINNING. ODDS OF WINNING WILL DEPEND ON THE TOTAL NUMBER OF ENTRIES RECEIVED. Sweepstakes only open to legal residents of the U.S. or Canada (excluding Quebec) who are 13 years of age or older at the time of entry. The "WWE Championships Twitter Sweeps" Sweepstakes (the "Sweepstakes") begins 3/25/14 and ends 4/7/14.

T-shirts - Society6 Popular All « PrevNext » Top 10 Best Novels of the Last 20 Years Books The ten novels on this list all substantiate the belief that books are the most elastic, introspective, human and entertaining form of media that exist. Not movies, not music, not art, not the theatre. A famous author once said that novels are the best way for two human beings to connect with each other. I believe this, and I believe that people who do not find pleasure in words have never had the opportunity to read one of the great novels.

Good Life Eats - StumbleUpon bookmarks | 26 comments I don’t really use real bookmarks. I’m not sure why. Kapoww T Shirts List of fictional diseases Items in this list are followed by a brief description of symptoms and other details. In literature[edit] In film[edit] On television[edit] In video games[edit] Underlined Book Quotes Become Clever Illustrations Bookworm or not, you can't help but enjoy these black and white illustrations of literary quotes by Evan Robertson. The New York-based graphic designer has taken some of the cleverest lines written by famous authors such as William Faulkner and Oscar Wilde and turned them into wonderful posters. These literature-inspired fine art illustrations are currently being sold on Etsy under the name Obvious State. Robertson would see a "little jewel of a sentence" and he'd underline it. Then, he would take those "snippets of text and ideas" and "let the words be a springboard for an illustration."

presents: Awesome Mysteries Youve Never Heard Of Green Children In the 12th century near Suffolk, England local farmers made a remarkable discovery: a boy and a girl weeping in a field... both with green skin. The children spoke no English and refused to eat food. They both wore oddly-colored clothing that appeared to be metallic. Eventually they began to eat beans exclusivly after going without food for several days, but only after they were shown how to open the stalks.

100 Exquisite Adjectives By Mark Nichol Adjectives — descriptive words that modify nouns — often come under fire for their cluttering quality, but often it’s quality, not quantity, that is the issue. Plenty of tired adjectives are available to spoil a good sentence, but when you find just the right word for the job, enrichment ensues. Practice precision when you select words. Here’s a list of adjectives: Subscribe to Receive our Articles and Exercises via Email 50 Lessons Life Taught Me To celebrate growing older, I once wrote the 45 lessons life taught me. It is the most-requested column I’ve ever written. When my odometer rolled over to 50, I updated the list.

Illustrations Of Unusual And Rarely Spoken Words Recumbentibus—A knockout punch, either verbal or physical. The Irish illustration duo of James and Michael Fizgarald, or also known as The Project Twins, have come up with a series of illustrations that visually represent rarely spoken and heard of words. In their series called ‘A-Z of Unusual Words’, the meaning of the words have been visually defined in the form of a whimsical poster—which can be purchased on their website.

Family tree of the Greek gods Key: The essential Olympians' names are given in bold font. See also List of Greek mythological figures Notes External links Media related to Family trees of Greek mythology at Wikimedia Commons mental_floss Blog & The Quick 10: 10 Things You Probably Didn't... With Harry Potter and the Half Blood Prince coming out in the U.S. later this week, it's time to out myself as a Slytherin Supporter. Maybe you already knew that. Nothing against Gryffindors - I'm no Voldemort or anything - but I always tend to like the villains a little more than the do-gooders. To celebrate Harry and Co.'