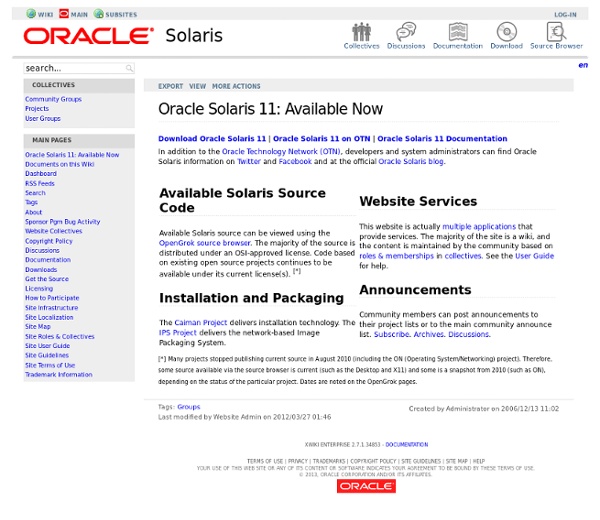 In addition to the Oracle Technology Network (OTN) , developers and system administrators can find Oracle Solaris information on Twitter and Facebook and at the official Oracle Solaris blog . Available Solaris source can be viewed using the OpenGrok source browser . The majority of the source is distributed under an OSI-approved license. The Caiman Project delivers installation technology. [*] Many projects stopped publishing current source in August 2010 (including the ON (Operating System/Networking) project).

No Cost Resources (Community Group edu.nocost_resources Sun has several no-cost resources to help students, educators, and researchers get the most from your participation in the OpenSolaris community. If you use these resources, please share your comments and experiences on the education: discuss discussion forum. If you develop more resources or would like to work with others to develop more resources, let us know on the education: curriculum discussion forum. [PDF] This 16-page booklet has it all: a comprehensive introduction to OpenSolaris, an installation guide using VirtualBox, a workshop-based tutorial to set up Web and Java development environments, and an interview with OpenSolaris product manager Glynn Foster. [PDF] This 36-page book shows you how to use DTrace to collect information about your system or application that you can use to improve the performance of your system or application. DTrace is especially well suited for collecting data about applications running on a live system under a real workload. Students Curriculum Modules

Dr Nikolai Bezroukov. Solaris vs. Linux: Framework for the Comparison. Part 3: Four major areas of Linux and Solaris deployment Solaris vs. Linux: Framework for the Comparison by Dr Nikolai Bezroukov Introduction Support of professional keyboards Support of advanced mice VMware and other virtual machines as a new factor on the desktop Corporate socialism as a powerful promoter of desktop linux in large enterprise environment Linux as a software development environment Introduction In old days (say, before 1998) it was Solaris that dominated workstation market as Intel CPUs were still not powerful enough to compete with RISC based CPUs. But those days are long gone and with them is gone any noticeable Solaris presence in workstation market. Web site statistics that we have access to suggests that approximately low teens (10%-13%) hits comes from linux, approximately the same as Apple. Here are the data for February 2012: Here is how the same website hits were distributed by OS in 2008 April 2008 You can see that all-in-all Linux & Apple OS X in 5 years took from Microsoft less then 9% of the market. pla: June 08, 2013

Fan Buttons (Community Group advocacy.buttons) - XWiki 3.1 Beta Spread the Word Below are some OpenSolaris community fan buttons. Right click on the images to download, and read the guidelines at the bottom of the page for usage policies. More artwork can be found here . Black opensolaris.org Theme Blue opensolaris.org Theme Multi-color opensolaris.com Theme Clear Space Please ensure the OpenSolaris technology fan buttons and banners remain visually distinct from other logos and graphics and do not overlap other design elements. Using Fan Buttons and Banners Please make sure the fan buttons and banners appear in a smaller size and in a less prominent location than both your web page title and, if applicable, your company name or logo. No Modifications Please use the artwork provided. These buttons and banners should be configured as active links back to this OpenSolaris community website. OpenSolaris Trademark Policy See the OpenSolaris Trademark Policy here for further information.

Microkernel Structure of monolithic and microkernel-based operating systems, respectively Microkernels were developed in the 1980s as a response to changes in the computer world, and to several challenges adapting existing "mono-kernels" to these new systems. New device drivers, protocol stacks, file systems and other low-level systems were being developed all the time. Although major work on microkernels had largely ended, experimenters continued development. Microkernels are closely related to exokernels.[3] They also have much in common with hypervisors,[4] but the latter make no claim to minimality and are specialized to supporting virtual machines; indeed, the L4 microkernel frequently finds use in a hypervisor capacity. Introduction[edit] Early operating system kernels were rather small, partly because computer memory was limited. The Berkeley Software Distribution (BSD) of Unix began the era of big kernels. Inter-process communication[edit] IPC can be synchronous or asynchronous. Servers[edit]

Exokernel Operating System 3.1 Beta 3 MIT Exokernel Operating System Putting the Application in Control. An operating system is interposed between applications and the physical hardware. Structure of an exokernel system. in turn use the exokernel to allocate and deallcate hardware resources. We have built several exokernel based systems. Check out a slide-show about exokernels on our documentation page. An alpha-release of our exopc distribution is currently available. For more information on exokernels and related projects see the home pages of the Parallel and Distributed Operating Systems group at the MITLab for Computer Science.

Build your own multi-terabyte file server with OpenSolaris and ZFS : Mark Koch&#039;s Weblog Background A couple years ago, I built a 1TB file server using standard computer components. I wanted a place to put my photos, music and movies and be able to access it via Samba or NFS from other computers in my house... oh, and I'm a cheapskate so spending too much money was not an option. I used an old chassis and motherboard that I had along with some other components that I already had. Weekends with Linux, Feel the Burn I put my file server together and downloaded the latest Fedora Core 4. Things worked happily for about a week. Another few months passed and finally one weekend, the Linux file server which had been unnaturally resurecting itself started to have performance problems. Solaris is not Linux A few months later, I attended a presentation at Sun when Solaris Nevada was only a few builds old. I decided to bite the bullet and build a new file server with Solaris and ZFS. Solaris is NOT for insomniacs I installed Solaris without much trouble. The Future