2015's most common CSS Resets to copy/paste, with documentation / tutorials 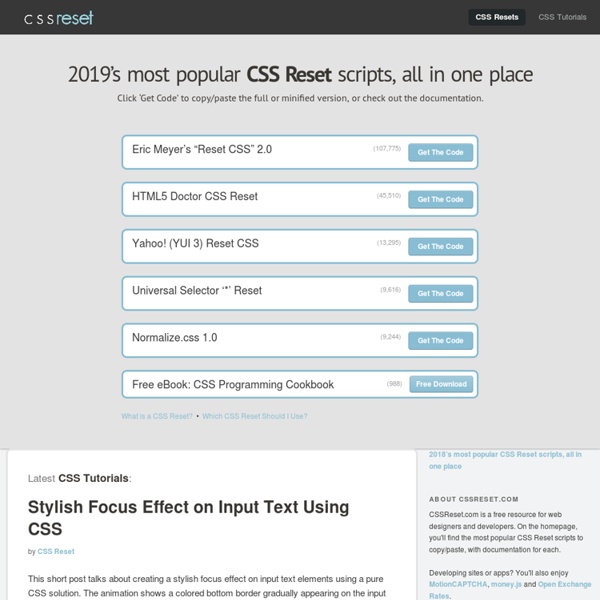 Enduring CSS: writing style sheets for rapidly changing, long-lived projects – Ben Frain 1174Days 1174 days since this post was last revised. Specific details are likely out of date. 25th September, 2015. The methodology of this post has now been updated, expanded and detailed more fully in my book, Enduring CSS, available from Leanpub. When architecting CSS for a large scale project it’s a common aim to abstract visual patterns for re-use, DRY out code and normalise our designs as much as possible.

Create An HTML/CSS Mobile Web App Using Sencha Touch - Smashing Coding Advertisement The world of mobile app development is quickly becoming a crowded and complicated space, especially for those outside of the development niche. “Which development platform should I use?” “Do I go native or Web-based?” “Which devices should I plan for?” “Can I build my mobile website by hand or should I use a pre-built package?”

CSS character escape sequences · Mathias Bynens There are some other cases where you might want or need to escape a character in CSS. You could be writing a selector for a funky id, class, attribute or attribute value, for example; or maybe you want to insert some weird characters using the content property without changing your CSS file’s character encoding. Identifiers and strings in CSS The spec defines identifiers using a token diagram. They may contain the symbols from a to z, from A to Z, from 0 to 9, underscores (_), hyphens -, non-ASCII symbols or escape sequences for any symbol. They cannot start with a digit, or a hyphen (-) followed by a digit.

An Introduction To Object Oriented CSS (OOCSS) - Smashing Coding Advertisement We explore how to craft flexible front-end design patterns and making future-proof and accessible interfaces without extra effort. Hardcover, 312 pages. Prefix free: Break free from CSS vendor prefix hell! -prefix-free lets you use only unprefixed CSS properties everywhere. It works behind the scenes, adding the current browser’s prefix to any CSS code, only when it’s needed. The target browser support is IE9+, Opera 10+, Firefox 3.5+, Safari 4+ and Chrome on desktop and Mobile Safari, Android browser, Chrome and Opera Mobile on mobile. If it doesn’t work in any of those, it’s a bug so please report it. Just before you do, please make sure that it’s not because the browser doesn’t support a CSS3 feature at all, even with a prefix. In older browsers like IE8, nothing will break, just properties won’t get prefixed.

Rapid Prototyping For Any Device With Foundation - Smashing Coding Advertisement This article is the second piece in our new series introducing new, useful and freely available tools and techniques presented and released by active members of the Web design community (the first article covered PrefixFree, a new tool be Lea Verou). ZURB are well-known for their wireframing and prototyping tools and in this post they present their recent tool, Foundation, a framework to help you build prototypes and production code that’s truly responsive. You’ve probably already heard about responsive design, which is website design that responds to the device constraints of the person viewing it. It’s a hot topic right now, and with good reason: alternative devices outsell desktop PCs 4 to 1 already, and within three years more Internet traffic in the US will go through mobile devices than through laptops or desktops.

CSS Formatter and Beautifier Enter your messy, minified, or obfuscated CSS Style Sheets into the field above to have it cleaned up and made pretty. The editor above also contains helpful line numbers and syntax highlighting. There are many option to tailor the beautifier to your personal formatting tastes. When do you use CSS Beautifier Often when writing CSS Style Sheets your indentation, spacing, and other formatting can become a bit disorganized. CSS3 Flexible Box Layout Explained - Smashing Coding Advertisement The flexible box layout module — or “flexbox,” to use its popular nickname — is an interesting part of the W3C Working Draft. The flexbox specification is still a draft and subject to change, so keep your eyes on the W3C, but it is part of a new arsenal of properties that will revolutionize how we lay out pages. At least it will be when cross-browser support catches up. In the meantime, we can experiment with flexbox and even use it on production websites where fallbacks will still render the page correctly. It may be a little while until we consider it as mainstream as, say, border-radius, but our job is to investigate new technologies and use them where possible.

Grid Designer 2 If you're familiar with the grid, a bit of design and basic typography, using this script should be pretty easy - most of the functions are pretty self-explanatory. If you're unfamiliar with grids in general, you could start by reading an excellent series of articles by web designer Mark Boulton. For those who want a real understanding of the theory of grids in relation to design and typography, I strongly recommend this book. On the Columns tab, you can start your design in two ways: Fill in the number of columns, total width, gutters and margin widths, all specified in pixels - then press the design button.