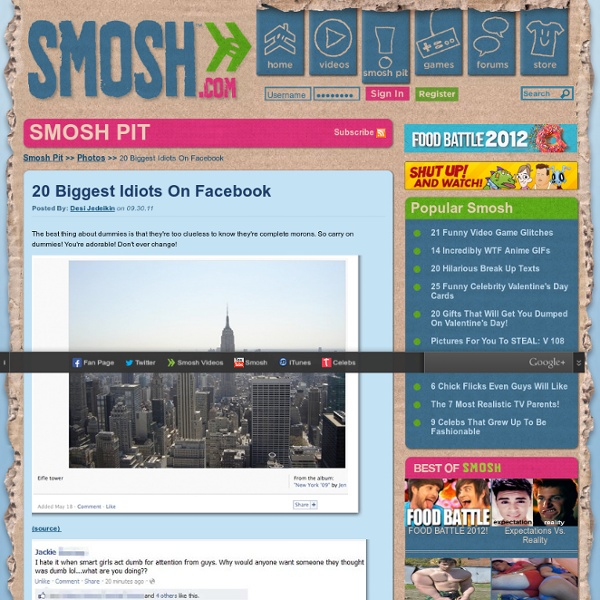 Virtusphere World's Most Absurd Warning Signs And Disclaimers 8 more of the world's most absurd warning signs and disclaimers. Some people say Americans' love of suing the crap out of each other is a bad thing, but if it wasn't for that litigious spirit our warning signs and product disclaimers would be far less entertaining. No matter how ridiculous they may seem, remember that at some point in time, someone did something to make each of these signs necessary. Updated 12/29/11: Facebook Changes We’d Actually Want To See If you had a dollar for every person who posted their hatred of the new Facebook layout, you’d be able to give Mark Zuckerberg a run for his money. Okay that’s a guess, and most likely a wrong one, but you get our point. When Facebook made its most recent set of changes the Preteen Panic Meter hit “Justin Bieber Has A Girlfriend” levels, and while that demographic made the most noise (mostly high-pitched screams), we weren’t too crazy about the adjustments either.

2 Wired 2 Tired - Funny Signs Did you hear the news? Login Rage Comics Did you hear the news? Did you hear the news? Date: 08/28/2011 Full size: 651x2161 previous Things People Said: Courtroom Quotations The following quotations are taken from official court records across the nation, showing how funny and embarrassing it is that recorders operate at all times in courts of law, so that even the slightest inadvertence is preserved for posterity. Lawyer: "Was that the same nose you broke as a child?"Witness: "I only have one, you know." Lawyer: "Now, Mrs. Johnson, how was your first marriage terminated?"Witness: "By death." Accused, Defending His Own Case: "Did you get a good look at my face when I took your purse?" The defendant was found guilty and sentenced to ten years in jail. Lawyer: "What is your date of birth?" Lawyer: "Can you tell us what was stolen from your house?" Lawyer: "What gear were you in at the moment of the impact?" Lawyer: "Can you describe what the person who attacked you looked like?" Lawyer: "This myasthenia gravis -- does it affect your memory at all?" Lawyer: "How old is your son, the one living with you?" Lawyer: "Sir, what is your IQ?" Lawyer: "What happened then?"

Gotta Friend 'Em All!: Pokémons On Facebook This is a little gallery of make-believe Facebook updates made by PokÃ©mon monsters. Or maybe they're real, I don't know. Just because you've never seen a PokÃ©mon in real life doesn't mean they don't exist, amirite? No, I'm not. Otherwise we'd all believe in leprechauns despite no empirical evidence besides that time I fell asleep in the woods and woke up with a really small handful of gold coin chocolates in my ass. I wasn't even after your lucky charms, little man! Hit the jump for four more.

Nine Hilariously Awkward Facebook Interactions What happens when you insult the boss you’ve added as a friend and ask a friend if their child is stoned? The most hilariously awkward Facebook interactions ever: My Goatee Isn’t Stupid Why You Don’t Friend Your Boss On Facebook Putting Your Credit Card On Facebook…. Osama Vs Obama Facepalm Hilariously Awkward Facebook Interactions: That’s A Lot Of Likes Why Moms Shouldn’t Be Allowed On Facebook That Is Not How Internet Shopping Works This Was Not David’s Finest Moment And The Ultimate… Why You Don’t Cross Your Brother Things People Said: Courtroom Quotations - StumbleUpon This is going to blow your mind, so steady yourself: A carton of eggs could potentially have eggs in it. Yes. Now you know the shocking truth. It's OK, we'll give you a minute to let it sink in ... The exact wording of this flabbergasting pronouncement on a carton of eggs is: "This product may contain eggs." That's by far not the only wacky warning out there. America's lawsuit-obsessed society has forced product manufacturers to cover their you-know-whats by writing warning labels to protect us from ourselves.

If Google Search Results Had A Sense Of Humor What it would look like if Google Search results had a sense of humor. posted 02/24/2011 Ever wondered what would happen if Google Search was an even bigger wiseass than you? Cracked.com ran a brilliant contest to see who could come up with the most insulting, shocking, and delightfully cruel notions for how this would play out. Teen Charged After Trying To Rob Man Of His Call Of Duty Kansas City, Missouri – Never thought I would have two Call of Duty stories posted in one day, but then again I never thought I would grow up to be so damn adorable. Police in Missouri have arrested a teenager after they say he tried to rob a man of his recently purchased copy of Call of Duty: Modern Warfare 3. Police say a 27-year-old man had just returned home from picking up his reserved copy of Call of Duty when an SUV pulled up behind him in the parking lot and a man got out with a gun. The victim told police that the armed man demanded he hand over his new video game, warning him that he had “racked a round.” The victim decided the man could have his copy of Call of Duty when he pried it from his cold, dead, Dorito smelling fingers and refused to hand it over. A struggle for the gun ensued in which one shot was fired.

The Most Insane Search Suggestions Ever Seen On Google We probably shouldn't be surprised by anything people Google at this point, considering we all rely on it for everything short of brushing our teeth for us. But these search suggestions are almost as insane as using Bing. Updated 10/13/11: Man Threatens To Blow Up Best Buy After They Sell Out Of CoD:MW3 AURORA, CO – Police have arrested a man who they say threatened to shoot Best Buy employees and blow up the store after they sold out of Call of Duty: Modern Warfare 3, a video game he had pre-ordered earlier that day. Witnesses say Lomorin Sar, a 31-year-old man-child, became irate when he showed up to Best Buy to pick up his copy of the popular game shortly after midnight on Tuesday and was told they no longer had any in stock. Understandably disappointed, Sar allegedly began threatening the employees, asking when they got off work so that he could shoot them in the parking lot. Police were called and Sar was pulled over shortly afterwards. I will never understand how grown men can stand in line to buy a damn video game. Of course I’ll be waiting in line like a giddy schoolgirl to purchase my copy of Skyrim, but that’s not pathetic because I am cool.