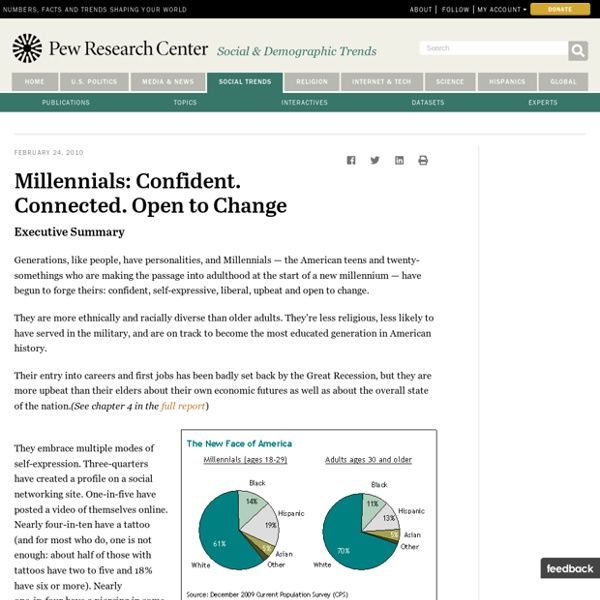 This is part of a Pew Research Center series of reports exploring the behaviors, values and opinions of the teens and twenty-somethings that make up the Millennial Generation Executive Summary Generations, like people, have personalities, and Millennials — the American teens and twenty-somethings who are making the passage into adulthood at the start of a new millennium — have begun to forge theirs: confident, self-expressive, liberal, upbeat and open to change. They are more ethnically and racially diverse than older adults. They’re less religious, less likely to have served in the military, and are on track to become the most educated generation in American history. Their entry into careers and first jobs has been badly set back by the Great Recession, but they are more upbeat than their elders about their own economic futures as well as about the overall state of the nation. They embrace multiple modes of self-expression. They get along well with their parents. Our Research Methods

The Freckled Fox: 50 Fun Fall Date Ideas Hey everyone! Boy day's have been cruisin' along here lately, and we're really getting into crunch time with this little baby on the way! I figure that I maybe have a week left to prepare any last minute things that I've been putting off for whatever reason (how about no extra time? :)) and being so rushed has certainly made me appreciate every bit of time that I have an excuse to get away from all the hustle and bustle!

Millennials Terminology[edit] Authors William Strauss and Neil Howe wrote about the Millennials in Generations: The History of America's Future, 1584 to 2069,[2] and they released an entire book devoted to them, titled Millennials Rising: The Next Great Generation.[3] Strauss and Howe are "widely credited with naming the Millennials" according to journalist Bruce Horovitz.[1] In 1987, they coined the term "around the time 1982-born children were entering preschool and the media were first identifying their prospective link to the millennial year 2000".[4] Strauss and Howe use 1982 as the Millennials' starting birth year and 2004 as the last birth year.[5] Newsweek used the term Generation 9/11 to refer to young people who were between the ages of 10 and 20 years on 11 September 2001. The first reference to "Generation 9/11" was made in the cover story of the November 12, 2001 issue of Newsweek.[17] Traits[edit] William A.

Young People Are Driving Less—And Not Just Because They're Broke - News As a teenager, I had little interest in driving. I lived in Prince George’s County, Maryland, mere blocks from the D.C. city line, with a bus hub down the hill and three Metro stations a mile or so from my parents’ house. And by the time my weekend evenings were done, I was rarely in any shape to get behind the wheel. (Sorry, Mom!) Who Are the Millennials? This post was written by Jenny Urbano, our Social Media Manager. Here at Demandforce, we love seeing and celebrating your ideas! And more than that, we love to hear from YOU. We want to bridge the gap between us and you, so that’s why we’re offering a once in a lifetime opportunity to win a trip to San Francisco, sightsee in this amazing city, visit Demandforce headquarters and share your ideas with us! 6 winners, and a guest of their choice will be flown out to San Francisco, California on March 12-14th, 2014, where they will stay in Union Square, spend a day at Demandforce, have dinner with the team, and explore the lovely City by the Bay!

Russian Photographer Katerina Plotnikova Creates Stunning Photos With Wild Animals Surreal photography can transport us from the realm of reality into a dream-like world of wonder. Russian photographer Katerina Plotnikova does just that with her incredible photography. She uses powerful animals and delicate models, juxtaposed together, to create her artwork. How the Millennial Generation Works Every generation has its own attitudes, values and even quirks. Consider, for example, how different Baby Boomers (those born between 1946 to 1964) are from their parents' generation. No one disputes that the Boomers largely revolted against the morally conservative upbringing of the previous generation. By doing this, Boomers created their own set of values that eventually dominated the culture, including feminism, looser sexual mores and anti-war sentiment.

Millennials: A Portrait of Generation Next – Pew Research Center Quiz See How You Compare to the Millennial Generation Take our 14 item quiz and we’ll tell you how “Millennial” you are, on a scale from 0 to 100, by comparing your answers with those of respondents to a scientific nationwide survey. You can also find out how you stack up against others your age. Politics & Values

Study: Millennials Value 'Social Economy' Anna Maria Virzi | May 25, 2011 | 2 Comments inShare112 McCann Worldgroup says brands must help young people share and narrate their lives. Tutorials - How to Draw Fantasy & Science fiction art Drawing the Face and Head One of the most important and most difficult things to do for an artist is to draw an appealing face. That doesn't just involve the plane the face is on, but the whole head as well. The right face on a figure can make or break a drawing. Read more Trees in Acrylic