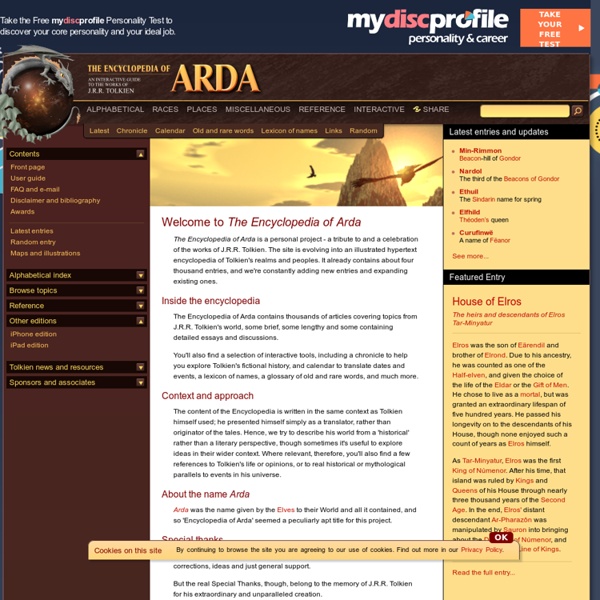 The Encyclopedia of Arda is a personal project - a tribute to and a celebration of the works of J.R.R. Tolkien. The site is evolving into an illustrated hypertext encyclopedia of Tolkien's realms and peoples. It already contains about four thousand entries, and we're constantly adding new entries and expanding existing ones. Inside the encyclopedia The Encyclopedia of Arda contains thousands of articles covering topics from J.R.R. You'll also find a selection of interactive tools, including a chronicle to help you explore Tolkien's fictional history, and calendar to translate dates and events, a lexicon of names, a glossary of old and rare words, and much more. Context and approach The content of the Encyclopedia is written in the same context as Tolkien himself used; he presented himself simply as a translator, rather than originator of the tales. About the name Arda Special thanks But the real Special Thanks, though, belong to the memory of J.R.R.

Writing With Elvish Fonts This is a tutorial for some of the fonts and tools that can be used for writing in Tengwar on a Windows PC. Contents Direct links to some notes in the text: "About installing fonts"; "A frequently asked question about TengScribe"; "A possible problem with Windows 2000 and XP". About this tutorial [ToC] The Very Secret Diaries Welcome! Here you may find the brilliant "Very Secret Diary" series by the wonderful Cassandra Claire. These are also published in her LiveJournal, but she was kind enough to agree to let your humble servant here publish them here. Enjoy! And do be sure to check out her LiveJournal. To receive email when ealasaid.com (which includes this site) is updated, please sign up for Ealasaid's mailing list.

A Clockwork Orange Film critic, Pauline Kael, writes a lot about how little she thinks of Kubrick’s creation. Literal-minded in its sex and brutality, Teutonic in its humor, Stanley Kubrick’s A Clockwork Orange might be the work of a strict and exacting German professor who set out to make a porno-violent sci-fi Comedy. Is there anything sadder — and ultimately more repellent — than a clean-minded pornographer? What I Learned from Harry Potter Harry Potter has been a part of my life since I was in high school. I've read the books, seen the movies too many times to count and my daughter is a huge fan. It's become part of who I am. I was sad to see it end.

Imaginary Friends by Terry Brooks, Speakman Press Good, but not up to usual standards of Terry Brook's work This story is the basis of one of Terry Brook's most memorable characters that has always stuck with me since I first met him. The story starts out well but seems to have been finished in a hurry. Fortunately, this concept was later expanded upon and became a major plot in a later book. I would still recommend purchasing this title as it demonstrates a writer in progress and more importantly as its purchase raises money for someone in need Top Fantasy Books and Series : Sword Blog You are here: Home / Fantasy / Top Fantasy Books and Series Top Fantasy Books and Series-List of best 10 fantasy book series. Fantasy sagas i love the most. Tolkien, Glen Cook, Steven Erikson, R. E.

The 10 Most Disturbing Books Of All Time In my younger days if I heard a book or movie was disturbing or hard to handle I generally took that as a challenge. Most books generally turned out to not be too bad, but occasionally I’d come across something that would leave me with a sick feeling in my stomach for weeks. I’ve largely outgrown this “genre” of late, but here are my picks for the ten most disturbing books of all time. Any one of these books is capable of leaving you feeling a little depressed at the least, and permanently scarred at the worst. I’d say enjoy, but that doesn’t really seem appropriate … 10.

David Bowie's 'Space Oddity' Recreated As Children's Book [Read + Listen ComicsAlliance readers should by now be familiar with the work of Andrew Kolb. We’ve spotlighted the illustrator’s work a couple of times before, first for his groovy representations of The Walking Dead and other beloved artifacts of pop culture, and most recently for his work with some of comics, film and television’s most famous double-acts like The Muppets’ Bunson and Beaker and Kevin Smith’s Jay and Silent Bob, but in the style of carved wooden blocks. Kolb’s latest work is more ambitious, telling the story of David Bowie’s classic “Space Oddity” in the style of an illustrated children’s book. The tale of doomed Major Tom plays out in Kolb’s bright and retro animation style, giving a face to the legendary Bowie character and making the conclusion that much sadder.Released in 1969 and considered a classic today, David Bowie’s “Space Oddity” is obviously a reference to Stanley Kubrick’s “2001: A Space Odyssey.”

100 Sci-Fi/Fantasy Novels to Geek Out Over - Half Price Books Blog - HPB.com If your answer to every question is 42. If you can quote the three laws of Robotics. If you want to say “my precious” every time you see a gold band. Then this list is for you. We asked our 3,000 bibliomaniacs what their favorite SciFi/Fantasy novels were, and here are their top 100 answers. Now, Dune has been on my reading list for a while, but I am definitely going to have to read Ender's Game.