How to chop wood without messing around. [VIDEO] - StumbleUpon 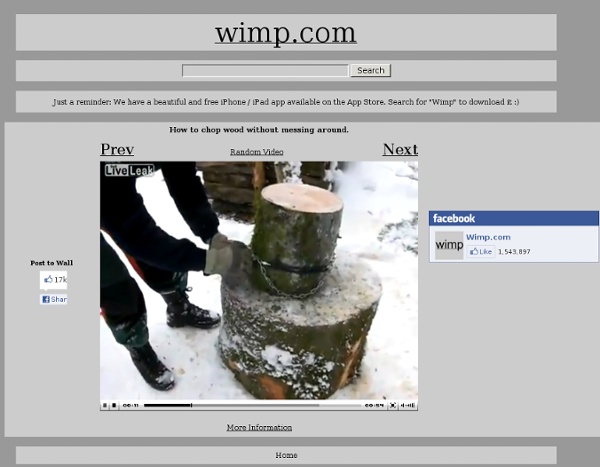 Ampharos I hope you'll forgive the fact that pictures aren't really all that great, but the weather has been really crummy outside, so we took the pics inside. Ampharos is another of the lesser known pokemon I'm really quite fond of. The pattern is a bit complicated in that there are quite a few parts to him, and lots of color changes. Other than that though, he's not very difficult to make. Is Your Job Killing You? Embed this infographic on your site! <a href=" src=" alt="Is Job Stress Killng You?" width="500" border="0" /></a><br />From: <a href=" We may accuse each other of exaggerating when we say our jobs are killing us, but it might not be that much of an exaggeration. Dozens of studies over the years have linked job stress to increased incidences of disease and death.

Four Homemade Cleaners This was easier than I thought it would be. One of Betsy’s goals for the year was to ditch some of our standard cleaners that we use around the house and make them! Honestly, I was a bit skeptical about this project mainly because I wasn’t sure that homemade cleaners would really get the job done. And my lovely wife is a bit of a neat freak so there’s no way she would use something that didn’t perform well. So a couple of weekends ago she went out and bought a few staple ingredients and some empty spray bottles and we spent a few minutes mixing up four different homemade cleaners that have since replaced 90% of the cleaners we use around the house. For the last few weeks we’ve been using them now and I’ve been so impressed by how well they are working, I thought I’d share them all with you in case any of you are interested in ditching the chemicals.

Kiwiyarns Knits Many of you dear readers will know by now that my little boy is a great fan of knitted soft toys (plushies). Especially ones that have anything to do with Pokémon. So imagine my delight when researching Pokémon toys on Ravelry to stumble across the wonderful Alyssa, who creates amazing amigurumi knitting and crochet patterns! And this is what Eric chose and asked me to knit at speed: It’s a free pattern, and written in a very innovative way – you almost need to do no sewing up at all as it’s pretty much knitted in one. I’ve been used to having to knit all the pieces and then sew them up one by one… it’s rather painstaking.

6 Life-Changing Uses for Binder Clips (That You Couldve Easily Thought Of) from Look What I Found Yes, it may seem like an ordinary binder clip. And it is. Make no mistake -- it will keep your papers organized with the best of them. The BEST. But it's so much more. Oh so much. Pokeball, Go! I have a gift for all of you Pokemon lovers (or parents of Pokemon lovers out there) in Cyberspace.But first, a little back story: My two oldest children are ever-so-slightly obsessed with Pokemon. They are also obsessed with throwing things at each other while yelling "Charizard, use Flamethrower!", or "Thunderbolt, Pikachu!" Needless to say, I got sick of the younger one screeching about being hit in the forehead with a plastic Pokeball so I decided to make a slightly softer version. Below, after the little story (made with my oldest son's help as well as a loan of some of his toys), you'll find a super-easy pattern for making your own Pokeball! It was early in the morning, and Ash and Pikachu were preparing to enter the Safari Zone, when suddenly the spotted a Chansey!

Recyclebank Vodka has many uses. Some of them are interesting and some are way out there. So read on to discover a countdown of some weird and wonderful uses for vodka. 16 weird and wonderful uses for vodka... and a few drink recipes. At a recent cocktail party, I was surprised to find people favoring brandy and bourbon drinks over vodka drinks. Electronic Mail Services Take a wooden matchstick and slice a thin sliver from one side. Then cut the remaining stick in two, lengthwise. Make sure you leave a little of the red tip intact for effect. Uses of Antimatter As of July 1, 2013 ThinkQuest has been discontinued. We would like to thank everyone for being a part of the ThinkQuest global community: Students - For your limitless creativity and innovation, which inspires us all.

20 Good Examples of HTML5 Portfolio Websites HTML5 has tons of new features, techniques and elements that allow designers to create new and beautiful stuff. HTML 5 is a language used for representing content for web technology. HTML5 are able to change the way you design Web sites. Include many new advanced features that one can not begin to see how they work. These new features and design techniques make it much easier create a website.

Make A Cheap & Easy Solar USB Charger With An Altoids Tin Photos by Joshua Zimmerman The craftster behind the very popular $3 solar-powered emergency radio is back with a new awesome project: a cheap solar battery charger with a USB plug. Zimmerman wrote, saying that he saw a lot of small solar powered chargers being talked about over Earth Day, but there was a big problem: "They're all quite nice, but also quite expensive. I don't think I've seen any for less than $60, and I've not seen one that really suits my style." NASA Reveals the Weird and Wonderful Commercial Airliners of 2025 NASA's contracted three of the biggest names in aircraft design to dream up the kind of airliner we'll see in 2025, and has just shown the initial concepts. They're weird, eco-friendly, and wonderful. NASA's goal is to invent commercial airliners that can cover the same kind of use cases as current aircraft, but do so with far greater fuel efficiency, less gaseous and noise pollution, and potentially eating up less energy and resources during their fabrication too. This is the sort of long term aeronautical experimentation that NASA funds from time to time, spurring companies to look into long term evolutionary concepts rather than incremental R&D in their usual business areas.