Da Vinci's Use of Sacred Geometry 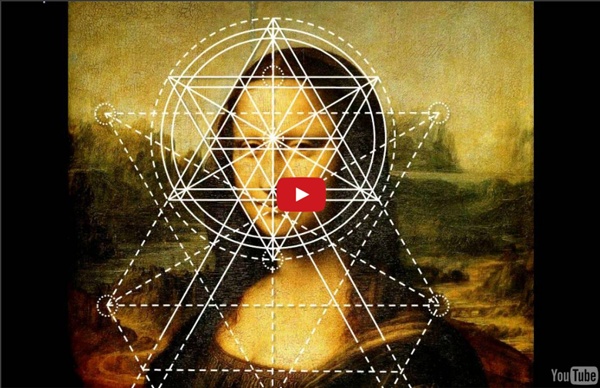 Science Mysteries, Fibonacci Numbers and Golden section in Nature Golden Ratio & Golden Section : : Golden Rectangle : : Golden Spiral Golden Ratio & Golden Section In mathematics and the arts, two quantities are in the golden ratio if the ratio between the sum of those quantities and the larger one is the same as the ratio between the larger one and the smaller. Fibonacci Leonardo Bonacci (c. 1170 – c. 1250)[2]—known as Fibonacci (Italian: [fiboˈnattʃi]), and also Leonardo of Pisa, Leonardo Pisano, Leonardo Pisano Bigollo, Leonardo Fibonacci—was an Italian mathematician, considered as "the most talented Western mathematician of the Middle Ages.".[3][4] Fibonacci introduced to Europe the Hindu–Arabic numeral system primarily through his composition in 1202 of Liber Abaci (Book of Calculation).[5] He also introduced to Europe the sequence of Fibonacci numbers (discovered earlier in India but not previously known in Europe), which he used as an example in Liber Abaci.[6] Life[edit] Fibonacci was born around 1170 to Guglielmo Bonacci, a wealthy Italian merchant and, by some accounts, the consul for Pisa. Guglielmo directed a trading post in Bugia, a port in the Almohad dynasty's sultanate in North Africa.

Mystery of the Real 3D Mandelbrot Fractal They're all very nice, but imagine such pictures in three dimensions, with all the advantages that 3D can allow such as parallax, perspective, and richer detail along with subtle light sourcing, shadows, and reflections. And actually, it turns out there are quite a few '3D' Mandelbot pics out there if you look..... Mandelbrot Flavours .....But are they the real McCoy, or just pale imitations? In fact, whenever you see a so-called 3D Mandelbrot image, roughly speaking, they can be divided into four types:

Leonardo da Vinci Leonardo is revered for his technological ingenuity. He conceptualised flying machines, an armoured vehicle, concentrated solar power, an adding machine,[7] and the double hull, also outlining a rudimentary theory of plate tectonics. Relatively few of his designs were constructed or were even feasible during his lifetime,[nb 2] but some of his smaller inventions, such as an automated bobbin winder and a machine for testing the tensile strength of wire, entered the world of manufacturing unheralded.[nb 3] He made substantial discoveries in anatomy, civil engineering, optics, and hydrodynamics, but he did not publish his findings and they had no direct influence on later science.[8] Life

The Great Pyramid of Giza The 35th Course of Masonry is quite notable in that it is particularly thick. At approximately 50 inches, it is the thickest course other than the base courses. The majority of courses range between 25 and 35 inches. As measured by Professor Petrie, the midline of the 35th Course occurs at 1162.4 B” (British Inches) from the Pavement level which is equivalent to 1161.1 Pyramid Inches. Professor Piazzi Smyth and subsequently D. Davidson subscribed a value for this elevation at 1162.6 Pyramid Inches with the explanation that 1162.6 x 10p =36,524 Pyramid Inches which is the Base Perimeter.

Leonardo's Secrets The Secret of Leonardo Da Vinci A recent spate of books and articles have suggested that Leonardo Da Vinci was the leader of a clandestine society and that he hid secret codes and messages in his art work. Is this true? In addition to his role in history as a famous painter, scientist and inventor, was he also the keeper of some vast secret to be passed down through the ages?

Plants perform molecular maths Nigel Cattlin/Getty As if making food from light were not impressive enough, it may be time to add another advanced skill to the botanical repertoire: the ability to perform — at least at the molecular level — arithmetic division. Computer-generated models published in the journal eLife illustrate how plants might use molecular mathematics to regulate the rate at which they devour starch reserves to provide energy throughout the night, when energy from the Sun is off the menu1. If so, the authors say, it would be the first example of arithmetic division in biology. But it may not be the only one: many animals go through periods of fasting — during hibernations or migrations, for example — and must carefully ration internal energy stores in order to survive.