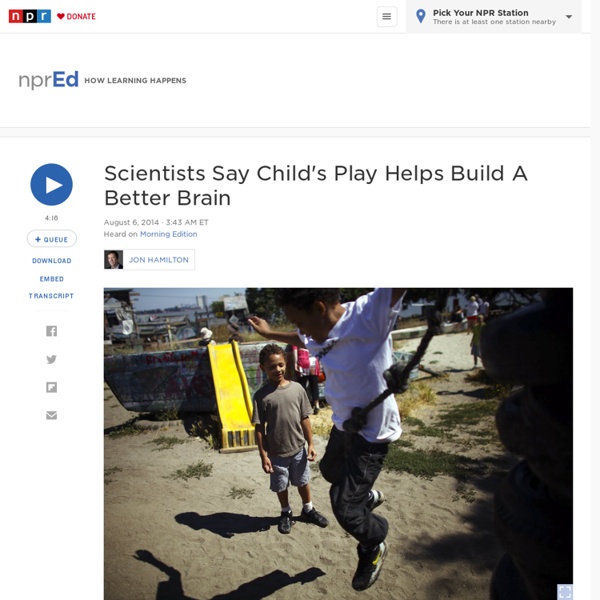 Symbolic play and language development 1. Introduction 1.1. Relationship between symbolic play and language Symbolic play, or pretend play, and language are known to be highly interrelated (DeLoache, 2002, McCune, 2010, Smith and Jones, 2011). Both rely on representational capacity, namely, employing one element as a signifier to represent another element (McCune, 2010). The cognitive benefits of play: Effects on the learning brain © 2008 - 2014, Gwen Dewar, Ph.D., all rights reserved Science supports many of our intuitions about the benefits of play. Playful behavior appears to have positive effects on the brain and on a child’s ability to learn. In fact, play may function as an important, if not crucial, mode for learning. Want specifics?

Deconstructing Role Play – Provide the Resources, Step Back and Watch Children’s Learning Flourish Hospital, vet’s surgery, post office, travel agent – themed role play areas are often seen as a must for an early years setting. They are often meticulously prepared to be aesthetically pleasing, covered in laminated words and pictures with the aim of enticing children in. But this is where I encountered a problem: in these areas, children are expected to come together to play out adult scenarios that are consistent with these themes. Does my toddler have a short attention span because she won’t sit still for a story? A: It is perfectly normal for toddlers to not sit still very long—period. Most don’t like to stay in one place for long now that they can explore in so many new ways—by running, jumping, and climbing. So, an adult’s idea of snuggling on the couch to hear a story may not be the same idea a toddler has for story-time. You may only be able to read or talk about a few pages in a book at a time.

MIT Brain Study: Back-And-Forth Talk Key To Developing Kids' Verbal Skills Sign up for the CommonHealth newsletter to receive a weekly digest of WBUR’s best health, medicine and science coverage. New MIT research finds that for children's brain development, parents don't just need to talk to their kids — it's important to talk with them, in back-and-forth exchanges. Story continues below The cognitive benefits of play: Effects on the learning brain © 2008 - 2014, Gwen Dewar, Ph.D., all rights reserved Science supports many of our intuitions about the benefits of play. Playful behavior appears to have positive effects on the brain and on a child’s ability to learn. Why Movement is Essential in Early Childhood With so few years under their belts, my 3- and 6-year-old daughters are still learning to inhabit their bodies. They are learning how to maneuver themselves physically, how to orient themselves in space. As Vanessa Durand, a pediatrician at St. Christopher’s Hospital for Children in Philadelphia, says, freedom of movement is necessary for children to meet their developmental milestones: “Children learn by experiencing their world using all of their senses. The restriction of movement, especially at a young age, impedes the experiential learning process.”

Primary school shake-up to focus on ‘play-led’ learning Children at primary schools would not study traditional subjects until as late as 10 years of age, under proposals being considered by policymakers. Instead, there would be a much greater emphasis on creative play during the early years of primary school, and broader areas of learning in later years. The reforms are based loosely on some of the features of top-performing education systems in countries such as Finland, as well as new research on how children learn. The proposals, drafted by the National Council for Curriculum and Assessment (NCCA), represent some of the biggest proposed changes to teaching and learning at primary level in more than two decades. They also seek to give teachers more flexibility and autonomy over the amount of time dedicated to key areas of learning.

I Said I Want the Red Bowl! Responding to Toddlers' Irrational Behavior Pin It Amelia, told that she can’t have a fifth book before bedtime, shouts: “You are the meanest mommy! You are not invited to my birthday party!” Practical tips By Opal Dunn, educational consultant and author Introduction Young children learn English differently from most adults. Most have an innate ability to pick up English while taking part in activities, by making sense of what they are doing and picking up the adult’s language that accompanies the activity. The Brain-Changing Power of Conversation The Science Researchers used highly faithful audio recorders — a system called Language Environment Analysis (known as LENA) — to capture every word spoken or heard by 36 4–6 year olds from various socioeconomic backgrounds over two full days. The recordings were analyzed to measure the number of words spoken by each child, the number of words spoken to each child, and the number of conversational turns — back-and-forth exchanges initiated by either adult or child.

Schemas in Children’s Play Written by Clare CaroSchemas in Children’s Play are such an important concept when it comes to the development of our children that it’s worth taking the time to understand them so you can facilitate them when you see them.What are these schemas?Well it’s really a fancy word for the urges that children have to do things like climb, throw things and hide in small places. They appear through play; perhaps it is the way they choose to do things, or what they desperately need to do out of the blue! Bringing It All TogetherAfter looking at each schema individually to get to grips with what each 'urge' is all about we may already be able to recognise some of the different ways they can appear in your child.Rotation, Trajectory, Enveloping, Orientation, Positioning, Connection, Enclosure/Container, Transporting and Transformation are urges that show in all children starting as early as their first birthday, some times before.How Can Knowing About These Urges Help Us?

Schema and Fairies - Kathy Brodie Early Years Training Schemas are one of those things that divide practitioners, like fairies at the bottom of the garden. You either believe in them and are in absolute awe at how amazing they are, or you just don’t believe they exist. It’s really interesting when you discuss this with people and it’s extra exciting when a ‘non-believer’ suddenly says “That describes my key child exactly!!” But first of all, let’s explore what a schema is.