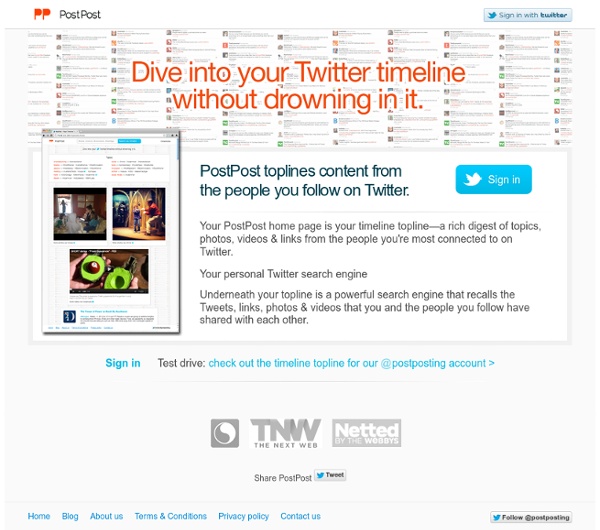 Social Content Curator Paper.li Picks Up US$2.1 million in Funding The ability to curate social media content from the likes of Twitter and Facebook into an online newspaper seems to be a big hit with investors as Paper.li picks up US$ 2.1 million in funding for their efforts. A Social Media Newspaper While sifting through the social media streams can be daunting and at times complex, Paper.li has found that by aggregating social content and presenting it into an easily readable newspaper format is just the solution. Tunisians sceptical of new govt - Africa The announcement of a new 'unity government' by Mohamed Ghannouchi, the Tunisian prime minister, has been met with anger by some protesters, who say too many members of ousted President Zine El Abidine Ben Ali's party remain in power. The PM announced that the former defence, foreign, interior and finance ministers will keep their key posts in the new government formed after the public uprising led to the flight of President Ben Ali. Up to 1,000 protesters gathered mainly near Tunis' Habib Bourguiba Avenue to demonstrate against the announcement. Tanks and troops were deployed, and water cannons and tear gas fired against activists who demanded that members of Ben Ali's Constitutional Democratic Rally (CDR) be excluded from the new government.

Aggregators, curators, and indexers: There’s a difference, and it matters Aggregation. Curation. Indexing. Flipboard: Future is HTML5, RSS & New New Advertising: Tech News and Analysis « As traditional publishers struggle to find new business models centered on the iPad and other tablets, Mike McCue, the founder of Palo Alto, Calif.-based mobile media company, Flipboard, seems to have figured out a business model for his 20-person company. McCue wants to build tablet-oriented HTML5 experiences, which allow him to bring branded advertising into a new, interactive and personalized future. The app, which launched in July 2010 amidst a lot of fanfare, critical acclaim and criticism, has been quietly figuring out its long-term game plan.

Things That Cannot Change [This post is by Dianne Hackborn, whose fingerprints can be found all over the Android Application Framework — Tim Bray] Sometimes a developer will make a change to an application that has surprising results when installed as an update to a previous version — shortcuts break, widgets disappear, or it can’t even be installed at all. There are certain parts of an application that are immutable once you publish it, and you can avoid surprises by understanding them. Sobees Launches iPad App NewsMix, A Socially Curated Digital Magazine Sobees has made a business of creating innovative social media clients, particularly focusing on bringing Twitter, Facebook and social search to the a variety of platforms. Today, the developer is getting into the news business with the launch of NewsMix, an iPad app which presents news and content shared by your social circle in a magazine format on the device. The app, which costs $2.99 in the App Store, allows you to create and mix a digital magazine composed of content shared in your Twitter, Facebook and RSS feeds (Google Reader and feed search).

Icelandic Parliamentarian Calls U.S. Subpoena of Her Twitter Account over WikiLeaks Involvement "Disturbing" This is a rush transcript. Copy may not be in its final form. AMY GOODMAN: We turn now to the latest in the Obama administration’s crackdown on the whistleblower group WikiLeaks. Last week, it was revealed the Justice Department has subpoenaed the internet company Twitter for personal information from several people linked to WikiLeaks, including its founder, Julian Assange. Aggregation and curation: two concepts that explain a lot about digital change Aggregation and curation: two concepts that explain a lot about digital change Every time I read a story about why newspapers are failing that doesn’t mention the role of aggregation and curation in their troubles, it reminds me that something very fundamental is being missed, even by very sophisticated observers. Aggregation is one of the core concepts of content presentation and commercialization. Any analysis of what happened to the record business, what is happening to newspapers, or the future of books and bookstores and magazines and TV that does not feature this concept prominently is almost certainly flawed. Aggregation, of course, simply means pulling together things which are not necessarily connected. Curation is a term that has always referred to the careful selection and pruning of aggregates, such as for a museum or an art exhibition.