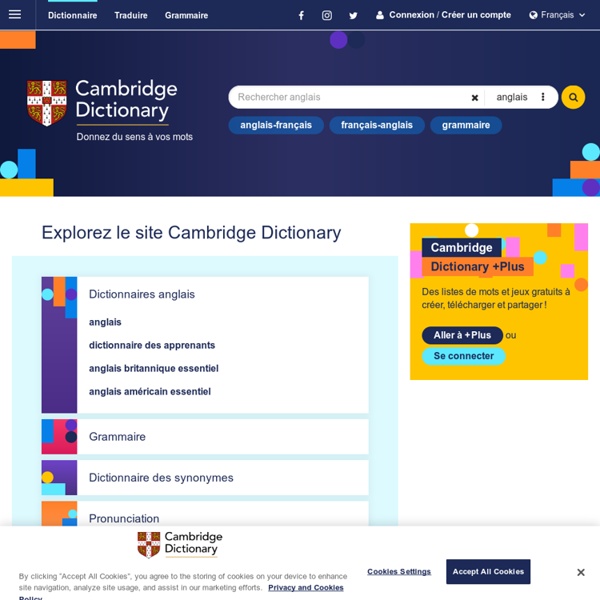 English Grammar in Use With Answers English Grammar in Use With Answers Students who want help with English grammar. It is written for you to use without a teacher. Will be useful for you if you are not sure of the answers to questions like these: 50 Popular English Idioms to Sound Like a Native Speaker To understand English as it is spoken in real life, you have to be familiar with idioms. They are used so much in everyday English that it is important to be aware of them. You need to learn what they mean, and how to use them to become an ‘insider’. This blog post will show you some of the most popular English idioms currently in use. Remember, knowledge is power.

Glossary of Literary Terms Action Also called “action-adventure,” action is a genre of film, TV, literature, etc., in which the primary feature is the constant slam-bang of fights, chases, explosions, and clever one-liners. Action stories typically do not explore complex relationships between human beings or the subtleties of psychology and philosophy. Ad Hominen Ad hominem is Latin for “against the man,” and refers to the logical fallacy (error) of arguing that someone is incorrect because they are unattractive, immoral, weird, or any other bad thing you could say about them as a person. Adage

Top Funniest English Idioms This lesson can still be improved.EDIT IT NOW! & become VIP What are the Funniest English Idioms? 8 Tongue Twisters to improve English pronunciation When learning a language like English, it is important to learn the correct pronunciation right away, not to correct your pronunciation at some point in the future. Being able to work out a particular sound pattern with a tongue twister helps not only with perfecting the sounds of consonants, but also with being able to speak the language quickly and clearly. Learn a few tongue twisters and repeat them several times each day and you will see a noticeable improvement. Give it a try and see how you do! 100 Best Movies of All Time That You Should Watch Immediately The greatest film ever made began with the meeting of two brilliant minds: Stanley Kubrick and sci-fi seer Arthur C. Clarke. “I understand he’s a nut who lives in a tree in India somewhere,” noted Kubrick when Clarke’s name came up—along with those of Isaac Asimov, Robert A. Heinlein and Ray Bradbury—as a possible writer for his planned sci-fi epic.

Mr. Duck and Mr. Turkey (Rhyme) - Chansons enfantines américaines - États-Unis - Mama Lisa's World en français: Comptines et chansons pour les enfants du monde entier Jeu de doigts (Anglais) 1. Mr. Turkey went out one day 2. The Medieval Village Economy (Classroom Activity) Medieval farmers preferred oxen to horses because they were less expensive to feed, stronger on heavy land and could be eaten when they died. The plough they used had an iron-tipped coulter in front to make the initial cut and a mould board to turn the soil over in a furrow. The fields were ploughed three times: the first turned the stubble over, the second removed the thistles and weeds and the third prepared the ground for sowing. Around most medieval villages there were three large arable fields. Two of these fields grew crops while the third was left fallow.