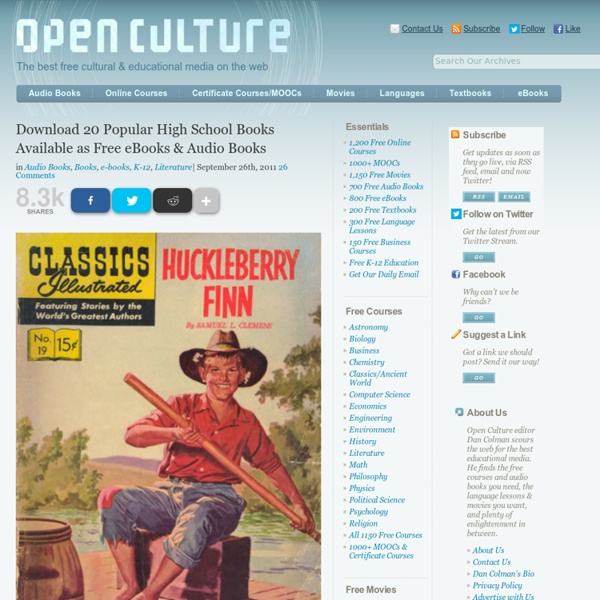 Every year, thousands of American high school students read a common selection of great novels — classics loved by young and old readers alike. Today, we have selected 20 of the most popular books and highlighted ways that you can download versions for free, mostly as free audio books and ebooks, and sometimes as movies and radio dramas. You will find more great works — and sometimes other digital formats — in our twin collections: 600 Free eBooks for iPad, Kindle & Other Devices and 550 Free Audio Books. So please give them a good look over, and if we’re missing a novel you want, don’t forget Audible.com’s 14 day trial. It will let you download an audio book for free, pretty much any one you want. 1984 by George Orwell: Free eBook – Free Audio Book – Free Movie Although published in 1949, 1984 still captures our imagination generations later because it offers one of the best literary accounts of totalitarianism ever published. Plays by William Shakespeare No description needed.

The Sixth Wave Prediction is a dangerous game. Not only is it difficult in foresight and easy in hindsight, but it also carries the possibility that you’ll be completely and utterly wrong. THE SIXTH WAVE makes a very bold prediction indeed. ABC Short Stories » Home In 2008, the ABC Radio Short Story project is not running. The 2007 ABC Radio Short Story Project winners have been announced. You can listen to the winning stories and read about the authors below. From a doctor who works in remote communities and writes in her spare time to an established children's book author and a reformed political speechwriter - the interviews with this year's winners paint a fascinating picture of the diverse lives of writers in regional Australia.

free printable flashcards, matching worksheets, printable bingo cards, printable games, activities, handouts and more There are 100+ sets of that I used to design curriculums for children ages 3-9 and 6-10. However, I use most of them up through to high school students and many with adults. See the left-hand menu for the current list of sets available.

24 Best Poems to Teach in Middle School and High School It can be hard to know which poems will spur your middle and high schoolers into deep, meaningful discussion and which will leave them, ahem, yawning. So we asked experienced teachers to share their favorites—the punch-in-the-gut poems that always get a reaction, even from teens. Here's what they had to say. 1. Snow by David Berman Captures a narrative in miniature with a creative structure. 2.

Sherlock Holmes: dispelling the myths Sometime in 1885 or 1886, Arthur Conan Doyle was doodling on a sheet of paper. He had the idea – inspired by Auguste Dupin, the sleuth who had solved Edgar Allan Poe's "The Murders in the Rue Morgue" – for a "consulting detective", who would use "the Rules of Evidence" to catch his man. But what would he be called? "Ormond Sacker"? Contours of the World Economy 1-2030 AD:Essays in Macro-Economic History By: Angus Maddison This book seeks to identify the forces which explain how and why some parts of the world have grown rich and others have lagged behind. Encompassing 2000 years of history, part 1 begins with the Roman Empire and explores the key factors that have influenced economic development in Africa, Asia, the Americas and Europe. Part 2 covers the development of macroeconomic tools of analysis from the 17th century to the present.

English at CH: Reading comprehension - 8B We will now start a reading comprehension period in English, and the material will be very individualized since many of you are on different levels. We will be using the website ReadTheory.org and you will get username and password from me. When you log in, the first thing you do is a placement test to assign you to the correct level - do the placement test quietly, on your own without asking questions or googling the answers, otherwise you won't get the exercises adapted for your development! Premium Harmony They’ve been married for ten years and for a long time everything was O.K.—swell—but now they argue. Now they argue quite a lot. It’s really all the same argument. Classroom Icebreakers - Icebreakers, Ice Breakers, Ice Breaker Games These classroom icebreakers are teacher-approved activities and games that address classroom needs! We recommend the following icebreakers for students of all ages. Classroom Icebreakers Breaking the Ice / Introduction Games

Preface: The War Against Cliche by Martin Amis At one time, "Literature and Society" was a phrase so much on everyone's lips that it earned itself an abbreviation: Lit & Soc. And Lit & Soc, I seemed to remember, had been for me a long-running enthusiasm. When complacently preparing my new collection of essays and reviews, The War Against Cliché, I planned to assemble my pieces on literature and society (pieces on FR Leavis and Lionel Trilling, and on lesser figures like Ian Robinson and Denis Donoghue). But when I leafed through the massed manuscripts I found only a handful of essays, all of them written, rather ominously, in the early 70s (when I was in my early 20s). Having re-read them, I toyed with the idea of including a nice little section called something like "Literature and Society: The Vanished Debate". Then I decided that my debate had better vanish too.

5 Cool Literature Sites You May Want to Visit This Year VirtualLit is an awesome site any teacher or a student who is interested in literature will love very much. VirtualLit is a step by step multimedia tutorial for a number of poems, novels, short stories and plays. Teaching Literature is a wiki dedicated to teaching literature. It is actually the companion website for Teaching Literature to Adolescents, by Richard Beach, Deborah Appleman, Susan Hynds, and Jeffrey Wilhelm. The website is organized according to Chapters and Generic categories. When you click on Chapters, you will find Links, Activities, and Further reading.