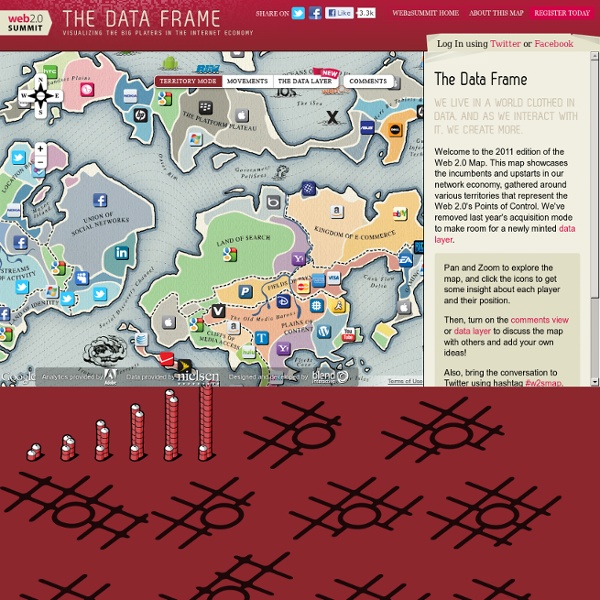 We live in a world clothed in data, and as we interact with it, we create more. Welcome to the 2011 edition of the Web 2.0 Map. This map showcases the incumbents and upstarts in our network economy, gathered around various territories that represent the Web 2.0's Points of Control. We've removed last year's acquisition mode to make room for a newly minted data layer. Pan and Zoom to explore the map, and click the icons to get some insight about each player and their position. Then, turn on the comments view or data layer to discuss the map with others and add your own ideas!

North Korea Appears Capable of Jamming GPS Receivers Defense officials in South Korea and military analysts elsewhere are expressing concern about what they call a new type of threat from Pyongyang. The North Koreans, according to South Korea's government, are now capable of disrupting GPS receivers, which are a critical component of modern military and civilian navigation. This week, the South Korea Communications Commission informed lawmakers that between August 23 and 25, signals emanating from near the North Korean city of Kaesong interfered with South Korean GPS military and civilian receivers on land and at sea. Officials say the jammers were repeatedly switched on for 10-minute periods over a number of hours during the three days.

Human Rights in the Information Society: Utopias, Dystopias and Human Values by Giovanni Sartor European University Institute Law DepartmentNovember 11, 2010 Abstract: I shall discuss the relevance of human rights for the information society. First I shall introduce the opportunities and dangers pertaining to the information society, referring to some literary or philosophical utopias and dystopias. I shall argue that human rights may provide some guidance for addressing such opportunities and dangers. I shall then consider how different human rights are involved in the deployment of information technologies, and the connections between such rights.

Web 2.0 Summit Blog » Blog Archive » Points of Control: The Map As themes for conferences go, Points of Control is one of our favorites. Our industry over the past year has been driven by increasingly direct conflicts between its major players: Apple has emerged as a major force in mobile and advertising platforms; Google is fighting off Microsoft in search, Apple in mobile and Facebook in social; and Facebook itself finds itself on the defensive against Twitter and scores of location startups like Foursquare. Nor are the Internet’s biggest players the only ones in the game – the rise of tablet computing has revived nearly every major hardware and handset manufacturer, and the inevitable march of online payment and commerce has roused the financial services giants as well. You know we’re in interesting times when American Express is considered an insurgent in its own industry. The result of our initial efforts is pictured above, you can go to the complete map here.

Is There Anybody Out There? I read a post on Social Media Today written by Alan Maites expressing some frustration with the lack of good information about measuring social media. He was bemoaning a piece Brian Solis had written for Advertising Age on Eight Steps to Creating a Brand Persona, sort of using it as an example to say there is no real good practical info out there on best practices for social media. It reminded me that there are a lot of us PR/Marketing/Communications people trying to figure out how to quantify social media. He even included a great cartoon from Hubspot that expressed the dilemma. It's trueâ€”metrics for social media is in its infancy stage, so there is a lot of information out there, but not much in terms of best practices.

Secrets of Social Media Revealed 50 Years Ago - David Aaker - The Conversation by David Aaker | 8:00 AM June 17, 2011 Almost 50 years ago Ernest Dichter, the father of motivation research, did a large study of word of mouth persuasion that revealed secrets of how to use social media to build brands and businesses. The study was reported in a 1966 article in HBR. A major Dichter finding, very relevant today, was the identification of four motivations for a person to communicate about brands. The first (about 33% of the cases) is because of product-involvement. The experience is so novel and pleasurable that it must be shared. I know where you are... The ubiquity of smartphones with geolocation capabilities (i.e. the ability to pinpoint you on a map) means that we're now starting to add our physical location to the mass of data we hand over. Services like Foursquare and Gowalla – and now Facebook "Places", which Dominique and Alex have written about this month – encourage people to submit their location so that others (e.g. "friends") can see when there are in the vicinity (e.g. to meet up for a coffee). Participation is encouraged through incentives such as designating an individual the "mayor" of a location that they visit more than anyone else.

Google’s Nifty Guide To Web Technology; It’s iBooks-Like But Built With HTML5 In what they’re calling a throwback to the original comic book they released to announce the launch of Chrome, Google has today unveiled a new site meant to educate users about browsers and the web. 20 Things I Learned About Browsers & The Web is actually an interactive web app meant to look like a children’s book. And while the book’s content is all about web technology, the interactive book itself shows off some of that technology as it’s built entirely in HTML5. And it’s very slick. Building data science teams Starting in 2008, Jeff Hammerbacher (@hackingdata) and I sat down to share our experiences building the data and analytics groups at Facebook and LinkedIn. In many ways, that meeting was the start of data science as a distinct professional specialization (see the“What makes a data scientist” section of this report for the story on how we came up with the title “Data Scientist”). Since then, data science has taken on a life of its own. The hugely positive response to “What Is Data Science?,” a great introduction to the meaning of data science in today’s world, showed that we were at the start of a movement. There are now regular meetups, well-established startups, and even college curricula focusing on data science.

Why QR Codes Are Poised to Hit the Mainstream The QR code, or quick response code, is simply a two-dimensional bar code that came into being in 1994 and found a large audience in Japan. Stateside, however, QR codes — while clever for tying real-world objects to online content — have always remained on the outskirts of public awareness. Nonetheless, we've seen QR codes employed for creative purposes. The Detroit Red Wings interactive programs and the giant QR codes in Times Square come to mind. Each of these serves as prime examples of how QR codes could be on the verge of their breakout moment. What the technology needs in order to finally make it to the mainstream are applications that take the nerd-factor out of the QR code scan, and drive home the potential rewards of seeing a code, scanning it, and then engaging with the served-up content.

What Was the Hipster? If I speak of the degeneration of our most visible recent subculture, the hipster, it’s an awkward occasion. Someone will point out that hipsters are not dead, they still breathe, they live on my block. Yet it is evident that we have reached the end of an epoch in the life of the type. Its evolution lasted from 1999 to 2009, though it has shifted appearance dramatically over the decade. It survived this year; it may persist. Indications are everywhere, however, that we have come to a moment of stocktaking. Nike+ Meets Gowalla in Vail Resorts App for Skiers and Snowboarders More than just powder will be coating the mountains and chair lifts at Vail Resorts this fall. The Colorado-based company has unveiled a new social gaming app for its 2010-2011 ski and snowboard season that allows visitors to track their activities and share them with their friends and family — all via radio frequency (RF)-enabled chips embedded in their season passes and lift tickets. The app, called EpicMix, is a cross between Nike+ and miCoach, which allow you to track your physical activities, and Gowalla, which rewards users for exploring new areas via its Trips feature. Like Gowalla, EpicMix rewards users with special pins for various accomplishments, such as being on the first chairlift of the day, or skiing a certain number of vertical feet over a designated period of time. How It Works

Crap Detection 101 : Howard Rheingold : City Brights “Every man should have a built-in automatic crap detector operating inside him.” Ernest Hemingway, 1954 The answer to almost any question is available within seconds, courtesy of the invention that has altered how we discover knowledge – the search engine. Materializing answers from the air turns out to be the easy part – the part a machine can do. The real difficulty kicks in when you click down into your search results. Ruminations on the Borderlands of Cartography The question is often asked “What is a map?” Out here on the Edge, the question might just as well be asked “What is not a map?” Before getting involved in that, let me propose the metaphor of the Map Family Picnic. A metaphor is not an analog and some poetic license has to be granted. For those who are not familiar with family picnics, they are generally gatherings of individuals who are related by “blood” or marriage, often claiming a common descent from some historic individual.