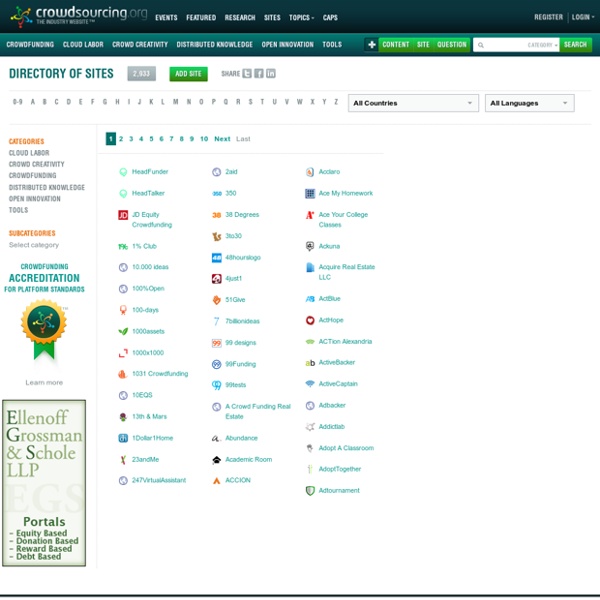 Sales & Marketing Advice I’m going to increase my writing about sales & marketing in the near future. I put a few posts up front that I have already covered in the Startup Series. But I will soon begin a discussion about sales methodologies. Stay tuned. 10 Marketing Tips for Startups Crowd Funding Websites - Strategy of Innovation Crowd Funding Internet Platforms If you do not see your platform, indicate me your website with a short pitch indicating your type of crowd funding, your theme and where in the world you are located (the owner of the platform) Crowd Funding = Raising money online by soliciting small amounts from many (the crowd) instead of a wealthy few These articles will help you to understand what Crowd Funding is about: - 1/2: Types of Crowd Funding: Ways Entrepreneurs Can Face the Investment Crisis (Eng) - 2/2: How to Invest Using a Crowd Funding Website (Eng) - French version of articles 1 and 2: (Fr) - Examples of CrowdFunding for big projects: (Eng) - Examples of biotech startups funded by Equity-based Crowdfunding/Micro-investing: (Eng)﻿

Crowdsourcing Crowdsourcing is a specific sourcing model in which individuals or organizations use contributions from Internet users to obtain needed services or ideas. Definitions[edit] The term "crowdsourcing" was coined in 2005 by Jeff Howe and Mark Robinson, editors at Wired, to describe how businesses were using the Internet to "outsource work to the crowd",[1] which quickly led to the portmanteau "crowdsourcing." Brainfluence: 5 Brain Tricks to Make Customers Buy Roger Dooley wants your business to succeed. So he's laying down the facts and dissecting recent brain and behavior research to enable you to tap into consumers' brains. Fact No. 1: People aren't always rational thinkers.

GoFundMe.com Get your very own crowdfunding website! Navy Blue Page Theme Crowdfunding is a great way to raise money for the things that matter to you most. Domain Name Contests Latest Name Contest Winners Domain Name Contests Hold a Domain Name Contest Get Started Latest | Aftermarket | Popular | Expiring | Closed Cassette tapes are the future of big data storage - tech - 19 October 2012 THE cassette tape is about to make a comeback, in a big way. From the updates posted by Facebook's 1 billion users to the medical images shared by healthcare organisations worldwide and the rise of high-definition video streaming, the need for something to store huge tranches of data is greater than ever. And while hard drives have traditionally been the workhorse of large storage operations, a new wave of ultra-dense tape drives that pack in information at much higher densities, while using less energy, is set to replace them. Researchers at Fuji Film in Japan and IBM in Zurich, Switzerland, have already built prototypes that can store 35 terabytes of data - or about 35 million books' worth of information - on a cartridge that measures just 10 centimetres by 10 cm by 2 cm. This is achieved using magnetic tape coated in particles of barium ferrite. Using tapes should cut down drastically on energy use, too.

Eppela - Italian Crowdfunding Over 580 candles sold in 40 days! 225 supporters joined in the value of handicraft made ??in Italy! More Americans Are Using Mobile Phones While Watching TV Thanks to the growth of smartphone adoption, about half of U.S. mobile phone owners use their devices while watching TV, a new study suggests. According to a Pew Internet & American Life Project report, cellphone users not only look up information online in real time and keep themselves occupied during commercials via their handheld devices, they are also interacting with friends. About 23% of cellphone users send text messages to others watching the same show in a different location. Other popular "connected" activities include looking up information mentioned on TV (20% have done so in the last 30 days), posting comments online about a show (11%), playing on phones during commercials (38%) and voting for a reality show contestant (6%). The study — which was conducted among 2,254 American adults ages 18 and older — also revealed that men and women are just as glued to their phones while watching TV (52%).

Outsourcing? How to Build Great Contractor Relationships Nellie Akalp is the CEO of CorpNet.com, an online legal document filing service, where she helps entrepreneurs incorporate or form an LLC for their new businesses. Connect with Nellie on Twitter or visit her free resource center. Today, independent contractors are a critical part of small businesses. They fill any number of roles, from social media consultant to web designer.

The case of Goteo: from Crowdfunding to Cloudfunding to expand resources for the Commons Although the limits of Internet’s scope are increasingly aknowledged, also is its potential for activating innovation, empowerment and common causes. The idea around the democratizing power of the Internet seems to be also growingly extended in the academic world as well as in the activist environment, and its utility to generate innovation and wealth is not hidden in the institutional sphere and the private market. The overwhelming grown of the crowdfunding phenomenon in the recent years has emerged as a good excuse to tackle important questions within the context of the economic and political crisis we are witnessing, something we started to talk about and design in response three years ago from Goteo, after a long time immersed in the interconnected areas of the Commons and social-driven innovation, and fortunately is nowadays much more known and discussed in different spheres and articles like this one from MoneyLab. By Goteo CC-by-SA Financiación colectiva con ADN abierto