A Town Without Poverty?: Canada's only experiment in guaranteed income finally gets reckoning 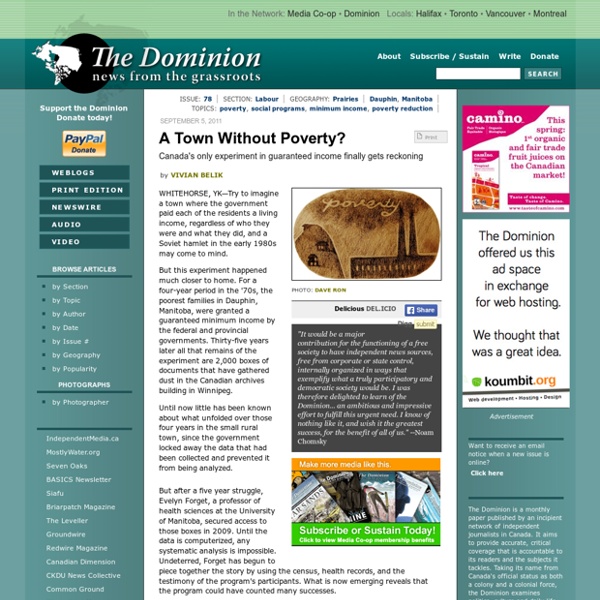 September 5, 2011 Canada's only experiment in guaranteed income finally gets reckoning by Vivian Belik The Dominion - Photo: Dave Ron "It would be a major contribution for the functioning of a free society to have independent news sources, free from corporate or state control, internally organized in ways that exemplify what a truly participatory and democratic society would be. WHITEHORSE, YK—Try to imagine a town where the government paid each of the residents a living income, regardless of who they were and what they did, and a Soviet hamlet in the early 1980s may come to mind. But this experiment happened much closer to home. Until now little has been known about what unfolded over those four years in the small rural town, since the government locked away the data that had been collected and prevented it from being analyzed. Unlike welfare, which only certain individuals qualified for, the guaranteed minimum income project was open to everyone. Related:  Economic Theory and Bits

Facing Mass Layoffs, Taliban Protest US Sequester Mullah Omar took to the media to offer harsh bipartisan criticism. QUETTA, PAKISTAN – As the United States rapidly approaches the deadline for sequestration, President Obama is getting support from an unlikely quarter: Taliban spiritual leader Mullah Muhammad Omar. In a video released today, Taliban spokesman Zabibullah Mujahid read a statement from the group’s supreme leader: “I, Mullah Muhammad Omar, Emir of the Taliban, Commander of the Boy Brigades, Custodian of the Holy Poppy Fields, Rocker of the Casbah, Sultan of Swing …” After several minutes Zabibullah was able to read the actual contents of the statement, where the Taliban leader addressed what he referred to as the “dire consequences” if Congress fails to resolve the sequestration issue: “Peace be upon you, American infidels. “Half our budget comes from skimming off your operations in Afghanistan. When asked about the Taliban’s statement, White House spokesman Jay Carney was blunt. “These are false choices.

Lessons from Mincome: How a Basic Income Would Improve Health From 1974 to 1979, a basic income social experiment known under the name of “Mincome Program” took place in a small canadian town. Evelyn Forget, researcher, is one of the very few persons who have studied the sociological impact of the guaranteed income experiment. She tells us more about her findings, 20 years after the experiment ended. First of all, can you introduce yourself and tell us how you got interested in basic income? I’m an economics professor in the faculty of medicine at the University of Manitoba and my basic interest is in health-care costs. You produced the most important research studies on Mincome’s basic income experiment. The experiment was introduced in 1974 and ended in 1979. The purpose of the experiment was to find out whether people would stop working or work fewer hours if they were guaranteed an income. Some critics argue that people continued working because they knew or feared this experimentation would have an end. They weren’t tracked. Evelyn Forget

BRAZIL: ReCivitas continues to expand private-funded BIG ReCivitas, the Brazilian organization that distributes a privately-funded basic income in a small village in Brazil, now has a pro-bono partnership with the biggest tax law office in Latin America, Mattos Filho, Veiga Filho, Marrey Jr. and Quiroga. This partnership will give ReCivitas legal support for contracts for people who invest in the BIG Bank that supports the initiative. The BIG Bank, started by ReCivitas only a few weeks ago, already has 500,000 Brazilian Reals (About US$310,000)—thanks to donations and investments from as far a way as Japan. For more information about ReCivitas, go to their website at: Or, email the organizers at:recivitas@recivitas.org.br

Detroit Sinks With Belle Isle WITH the fourth anniversary of the Obama administration’s auto bailout approaching, the Detroit comeback narrative has settled into accepted history. Just last week, Chrysler, once the wobbliest of the Big Three, announced a ninefold increase in profits since 2011. In its Sunday Super Bowl ad, the company exuded such confidence, it no longer felt the need to defensively celebrate Rust Belt grittiness with the help of Eminem or Clint Eastwood, going instead with a syrupy paean to the Farm Belt called “God Made a Farmer.” It wasn’t immediately clear if God also made second-tier assembly line workers starting at 14 bucks an hour, but no matter. Three recent proposals on ways to patch holes in Detroit’s budget illustrate just how desperate things have become. The first, and by far the most serious, came from Gov. Belle Isle was recently at the center of a different moneymaking scheme. The third revenue-generating idea, in fact, came via Mr.

Now Then | Citizen’s Income 1 January 2025 was a pivotal date in our nation’s history. This coming new year marks the 20 year anniversary of the introduction of citizen’s income, so we’re taking this opportunity to look back on its history and reflect on the impact this unconditional basic income has had on our society. Back in the 2020s, the nation was reeling from almost half a century of failed market fundamentalism. The campaign for basic income was initially led by the progressive left as a radical means to combat poverty, rebalance worker’s rights and redistribute income. There were many who said it would not work. Citizen’s income was eminently affordable. But this growth wasn’t fuelled by consumer credit and material purchases. Other than new parents and young people, who stayed on longer in education, people actually worked more. Then there was the entrepreneurial revolution. Of course, poverty still exists, but not nearly on the same level. Jon Maiden

MONGOLIA: Government takes steps toward implementing an Alaskan-style BIG The coalition government of Mongolia is taking steps to make good on promises made in the 2008 election to introduce an Alaska-style resource dividend. Mongolia is a large, sparsely populated land-locked country sandwiched between Russian and China. About half of its citizens still live as nomadic herders. Most of the land in the country is unowned: herders can camp anywhere they find a spot. But the country has recently discovered some of the world’s most valuable mineral deposits, including gold, copper, coal, and other resources. International mining companies, under contract from the Mongolian government are already well on their way to begin exploitation of those resources. The Mongolian government is moving toward implementation of three methods to ensure that every Mongolia receives a financial benefit from that sale. The second method is to make every Mongolian a shareholder in the state’s mining enterprise.

Big Mac Prices Show Where Europe's Economic Reforms Are Working: Study BRUSSELS (Reuters) - Forget about statistics for employment and industrial production, it is being claimed that the price of a hamburger is showing where Europe's economic reforms are working - and where they are not. By studying the different prices for McDonald's Big Mac burger throughout the euro zone between July 2011 and January 2013, Guntram Wolff, an economist at think-tank Bruegel, found evidence that struggling countries like Ireland had tightened their belts and others had not. The price of a Big Mac has been used by The Economist for decades as a partially tongue-in-cheek way of judging global currency valuations - the gist being that it costs the same to make but is charged at different prices around the world. Wolff took the data and found that the price rise in Greece, Portugal and Spain has been less than the euro zone average, while in Ireland the price actually fell. This contrasts with price rises above the euro zone burger average in Germany. Also on HuffPost:

What's next for the European Movement for Basic Income? Dear Supporters, It’s been over two months since the European Citizens’ Initiative finished, with 300,000 signatures collected. The counter skyrocketed in the last days, which was a very encouraging ending. We would like to thank you all again for your support of this first European-wide campaign for UBI. As you may know, the initiative was prepared and organised thanks entirely to the unpaid work of volunteers. As we said all along, the ECI was only the first phase in building a European movement for unconditional basic income. At a meeting in Brussels 17 February, people who actively promoted the ECI in 18 countries, with support of those from seven other countries who could not attend, agreed to form Unconditional Basic Income Europe (UBIE) to take things forward. Conference launch for UBIE Last but not least, UBIE is holding its first public event on Thursday, 10 April 2014 at the European Social and Economic Committee at the heart of the European Union in Brussels.

INDIA: Basic Income Pilot Projects are underway Although barely reported in the media, two basic income pilot projects are have been underway in India since January 2011. One pilot is being conducted in part of Delhi and the other in eight small rural villages in Madhya Pradesh. The Self Employed Women’s Association (SEWA) began planning and raising money for the rural project in 2008. The Delhi government eventually joined in, working with SEWA to organize an urban pilot project in Delhi. Publicity about the project has been deliberately kept low because opponents have been using scare tactics to disrupt and to discourage participation in the project. They have spread rumors that the pilot would lead to the reduction or elimination of existing government support for the poor. Families participating in the urban project receive 1000 Rupees per month (about US$22).

The Democratization of Banking: Why Is Socialism Doing So Darn Well in Deep-Red North Dakota? By Les Leopold North Dakota is the very definition of a red state. It voted 58 percent to 39 percent for Romney over Obama, and its statehouse and senate have a total of 104 Republicans and only 47 Democrats. The Republican super-majority is so conservative it recently passed the nation’s most severe anti-abortion resolution – a measure that declares a fertilized human egg has the same right to life as a fully formed person. But North Dakota is also red in another sense: it fully supports its state-owned Bank of North Dakota (BND), a socialist relic that exists nowhere else in America. Because it works. In 1919, the Non-Partisan League, a vibrant populist organization, won a majority in the legislature and voted the bank into existence. One of America’s Best Kept Secrets Each time we pay our state and local taxes — and all manner of fees — the state deposits those revenues in a bank. How the State Bank Creates Jobs No Bailouts for the BND Banking doesn’t have to be a casino.

Towards a Basic Income Law Excerpted from R.C. Smith: “Elliot Sperber’s recent paper ‘Toward a Salutary Political-Economy – Freedom from Jobs’ has received some interesting comments, questioning the basic income law and its practical consequences. In this paper Elliot wonderfully argues that freedom is not dependent on jobs, and what we should really be arguing toward is a ‘freedom from jobs’. In relation to the basic income law, I would argue that one of the most important reasons why we should look to the possible implementation of the basic income law is that it would free a lot of people from having to work meaningless, part-time jobs in often very destructive and highly-exploitative industries (consider fast-food work, for example). Furthermore, I see the basic income law as being vital when it comes to potentially implementing Economic Democracy (in the greater transitional process toward a non-market style economy). As a recent commenter reacted in response to the Elliot’s paper: