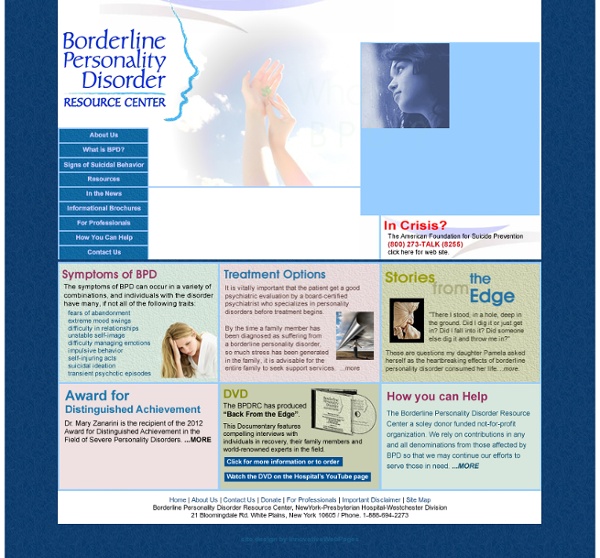 TARA Association for Personality Disorder Non-BPD's Need Tools Too How to Help a Loved One with Borderline Personality Disorder, Part 1 By Margarita Tartakovsky, M.S. Borderline personality disorder (BPD) can seem like an enigma, even to family and friends, who are often at a loss for how to help. Many feel overwhelmed, exhausted and confused. In Part 1 of our interview, Shari Manning, Ph.D, a licensed professional counselor in private practice who specializes in treating BPD, shares these effective strategies and helps readers gain a deeper understanding of the disorder. Q: What are the most common myths about borderline personality disorder (BPD) and how it manifests? •People with BPD are manipulative. •People with BPD do not really want to die when they attempt suicide. •People with BPD are stalkers (like the character from Fatal Attraction). •People with BPD just don’t want to change (or they would do so). •People with BPD are uncaring and only think of themselves. •BPD develops from childhood sexual abuse. •BPD develops from poor parenting.

LucidInterval.org - A Self-Management Guide for Bipolar Disorder DSM IV The Fourth Edition of the Diagnostic and Statistical Manual of Mental Disorders, or DSM IV is the standard classification of mental disorders used by mental health professionals in the United States. It used for patient diagnosis and treatment, and is important for collecting and communicating accurate public health statistics. The DSM consists of three major components: the diagnostic classification, the diagnostic criteria sets, and the descriptive text. The Multiaxial System of Diagnosis in DSM IV Criteria The DSM uses a "multiaxial" system for assessment. There are five axes in the DSM diagnostic system, each relating to a different aspect of a mental disorder: Axis I: This is the top-level diagnosis that usually represents the acute symptoms that need treatment; Axis 1 diagnoses are the most familiar and widely recognized (e.g., major depressive episode , schizophrenic episode , panic attack ). Axis II: Axis II is the assesment of personality disorders and intellectual disabilities.

The Limits of Intelligence Santiago Ramón y Cajal, the Spanish Nobel-winning biologist who mapped the neural anatomy of insects in the decades before World War I, likened the minute circuitry of their vision-processing neurons to an exquisite pocket watch. He likened that of mammals, by comparison, to a hollow-chested grandfather clock. Indeed, it is humbling to think that a honeybee, with its milligram-size brain, can perform tasks such as navigating mazes and landscapes on a par with mammals. At the other extreme, an elephant, with its five-million-fold larger brain, suffers the inefficiencies of a sprawling Mesopotamian empire. Select an option below: Customer Sign In *You must have purchased this issue or have a qualifying subscription to access this content