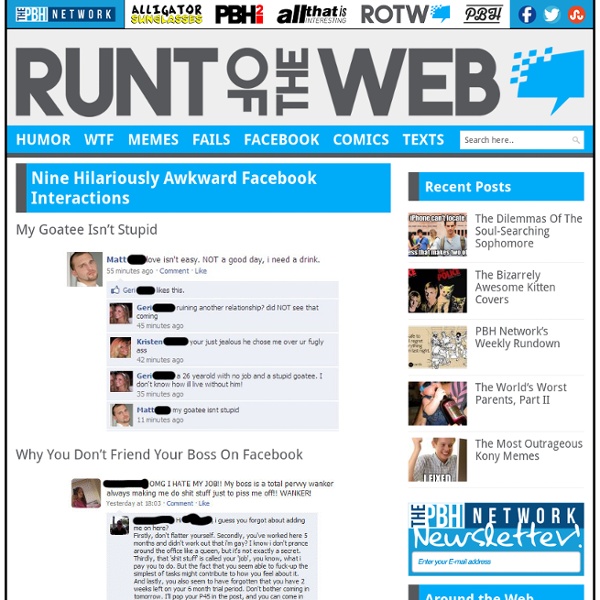 What happens when you insult the boss you’ve added as a friend and ask a friend if their child is stoned? The most hilariously awkward Facebook interactions ever: My Goatee Isn’t Stupid Why You Don’t Friend Your Boss On Facebook Putting Your Credit Card On Facebook…. Osama Vs Obama Facepalm Hilariously Awkward Facebook Interactions: That’s A Lot Of Likes Why Moms Shouldn’t Be Allowed On Facebook That Is Not How Internet Shopping Works This Was Not David’s Finest Moment And The Ultimate… Why You Don’t Cross Your Brother

Husband banned from Target Husband banned from Target After I retired, my wife insisted that I accompany her on her trips to Target. Unfortunately, like most men, I found shopping boring and preferred to get in and get out. Dwight Schrute Knows Best Oh Dwight, you are the best thing to happen to the US version of The Office. The wry second-in-command at the Scranton office of Dunder Mifflin is famous for his obscure knowledge and comically literal interpretation of… well… everything. And so the Dwight Schrute Knows Best meme or simply, the Dwight Schrute meme was born: 10 Most Unusual Aquarium Designs Erkan | On 12, May 2012 I’m personally aganist having aquariums. Because i’m not ok with putting fishes in narrow places like birds in cages. But these type of aquariums would make any place look better. May be companies should produce fake fishes like fake plants. What do you think?

How to Totally Troll someones Computer [pic] Email If you have ever wanted to carry out the ultimate practical joke using someone’s computer as your tool then this guide on how to troll a persons computer is something that you must read. For more hints, tips, news and all things technology and geek related please follow us on Facebook or Twitter or subscribe to our feed. The 6 Creepiest Places on Earth It doesn't matter whether or not you believe in ghosts, there are some places in which none of us would want to spend a night. These places have well earned their reputations as being so creepy, tragic or mysterious (or all three) that they definitely qualify as "haunted." Places like... Aokigahara is a woodland at the base of Mount Fuji in Japan that makes The Blair Witch Project forest look like Winnie the Pooh's Hundred Acre Wood. It probably has something to do with all the dead bodies scattered around. What Niagara Falls is to weddings, Aokigahara is to suicide.

- StumbleUpon Forget long wear lipstick and stains. Right now, we're wondering if we'll never need to reapply again. When we tried Urban Decay Super-Saturated lip color ($19), we expected it to be bright, but we didn't expect it to last through breakfast, lunch, and snacks seemingly unfazed. In fact, we just assumed it had worn off when we caught ourselves in the bathroom mirror and realized that it was still there and almost as vivid as it had been six hours before. Shakespeare Insult Kit Shakespeare Insult Kit Since 1996, the origin of this kit was listed as anonymous. It came to me on a piece of paper in the 90's with no attribution, and I thought it would make a cool web page. Though I searched for the origin, I could never find it.

Partial Face Transplants Pictures Gallery - Photoshop Partial Face Transplants Pics Contest Directions: [ A year after a Frenchwoman received the world's first partial face transplant, doctors say the operation was a success and she is gaining more and more sensitivity and facial mobility. British and American doctors already have plans for a first full-face transplant. ] Even if full face transplants become successful, politicians will never accept them. It's just too expensive to get transplants on two faces. Evie Read is an active five-year-old - but ataxia-telangiectasia will rob her of ability to speak and walk while leaving her mind untouched Twenty children in the UK are diagnosed with ataxia-telangiectasia every yearProgressive condition will slowly rob Evie of her physical abilities. There is no known cure By Claire Bates Updated: 10:23 GMT, 29 February 2012 If you saw Evie playing with a group of her school friends, the only difference you might notice is that she is sometimes a little unsteady on her feet. Tragically her 'wobbly legs' are due to a devastating underlying condition, that will slowly rob the bright blonde girl of her physical abilities while leaving her mentally alert.