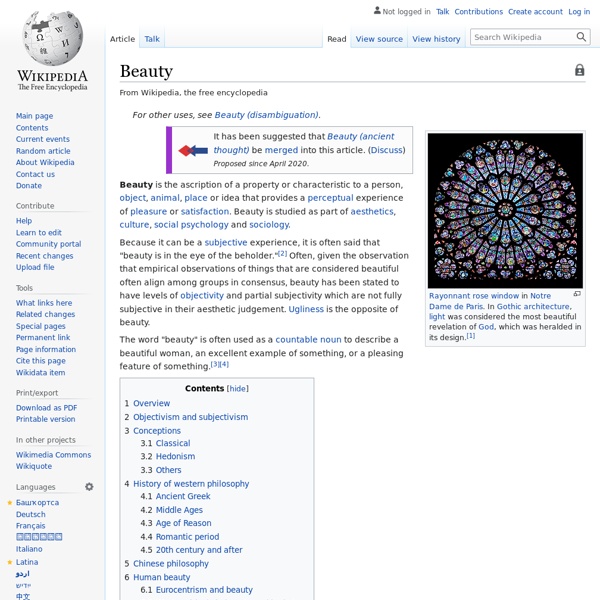 The experience of "beauty" often involves an interpretation of some entity as being in balance and harmony with nature, which may lead to feelings of attraction and emotional well-being. Because this can be a subjective experience, it is often said that "beauty is in the eye of the beholder. There is evidence that perceptions of beauty are evolutionarily determined, that things, aspects of people and landscapes considered beautiful are typically found in situations likely to give enhanced survival of the perceiving human's genes.[3][4] Etymology[edit] The classical Greek noun for "beauty" was κάλλος, kallos, and the adjective for "beautiful" was καλός, kalos. Historical view of beauty[edit] Florence Cathedral and dome. Plato considered beauty to be the Idea (Form) above all other Ideas.[10] Aristotle saw a relationship between the beautiful (to kalon) and virtue, arguing that "Virtue aims at the beautiful Beauty is truth, truth beauty, —that is all. Ye know on earth, and all ye need to know.

Bradley University: Body & Beauty Standards With images of ideal beauty bombarding us daily, it is easy to forget that standards of beauty are arbitrary and they vary greatly both from one culture to another and over time. Such variations in ideals of beauty often reflect the roles women and men are expected to fulfill in a given society. For instance, in contexts where women are valued mainly for their fertility—their ability to bear and nurture children—often full-bodied women with broad hips and ample breasts are considered the most beautiful. In societies such as Fiji, large bodies are a symbol of one’s status and power. But as social conditions and gender roles change, so do ideas about beauty. Why is the American body ideal for women so thin today? Does this tell us anything about the roles we expect men and women to fulfill? Can you think of any “plus-size” celebrities today?

Mathematical beauty Mathematical beauty describes the notion that some mathematicians may derive aesthetic pleasure from their work, and from mathematics in general. They express this pleasure by describing mathematics (or, at least, some aspect of mathematics) as beautiful. Sometimes mathematicians describe mathematics as an art form or, at a minimum, as a creative activity. Comparisons are often made with music and poetry. Bertrand Russell expressed his sense of mathematical beauty in these words: Mathematics, rightly viewed, possesses not only truth, but supreme beauty — a beauty cold and austere, like that of sculpture, without appeal to any part of our weaker nature, without the gorgeous trappings of painting or music, yet sublimely pure, and capable of a stern perfection such as only the greatest art can show. Beauty in method[edit] Mathematicians describe an especially pleasing method of proof as elegant. Beauty in results[edit] The opposite of deep is trivial. Perhaps ironically, Monastyrsky writes:

Male Bodies and Beauty throughout the ages | The Macaronis We have to acknowledge that in this day and age – as it has forever been – beauty matters. Our definition of beauty is based on the media saturation which we are bombarded with on a daily basis. For instance, the idea of tanned = gorgeous has only appeared recently — it would stand to reason that with all the lead-based paints and powder that was used, pale was beautiful as it indicated that you had no need to stand about in the sun all day. As a society, we perceive people who have traits which we consider admirable: self restraint, indefatigable dedication to an idea, sacrifice to epitomise the current standards of beauty – mirrored so closely in the way we view the working world. Personally, all that leaves me completely cold. why yes, that is a plastic knigget on a my little pony Of course, lacking a tardis, I can’t go back in time and drag examples of said bodies to parade before you. For the time periods, I’m shamelessly nicking the structure of “The List” from Speak Its Name.

Beauty through the ages - The Renaissance - The Beauty Biz - Article A historical period when real women were idolized Author: Charlotte Kuchinsky August 5 2007 The Renaissance was a cultural movement that began in Florence in the 1400’s, then spread throughout most of Europe, and lasted into the early years of the 16th century. Because the heart of the Renaissance era dealt with an idolization of the art and literature from the ancient civilizations of Rome and Greece, the perception of what was considered beautiful changed. Body Type Women of the Renaissance period did not concern themselves with things like a few extra pounds of weight. This is a stark contrast to modern attitudes! article continued Advertisement Hair The savvy Renaissance beauty was particular about her hair. Blondes were the epitome of beauty during this era and, therefore highly sought after. However, most of these products did not work alone. Some women opted to simply hide their hairlines and darker locks under jeweled turbans or caps, which were popular at the time. Cosmetics Clothing

How men's perfect body types have changed throughout history A precursor to the fop, the Macaronis were originally British young men who went abroad, fell in love with the Italian food "maccaroni" and the European style of dress. According to historian Geri Walton, the men would commonly order maccaroni to show off that they recently visited Italy and eventually got the nickname "macaronis." From the 1775 book Easy Phraseology, Joseph Baretti wrote "Strange, that this word has so much changed of its meaning in coming from Italy to England: that in Italy it should mean a block-head, a fool; and mean in England a man fond of pompous and affected dress!" They began to wear more fashionable and slightly feminine clothing. A trim figure was preferred as their many layers clung to the body. Basically, they were the hipsters of their day. Eventually, Macaronis became a laughing stock. People resented this womanly look and it soon fell out of fashion and placed a greater importance on looking properly masculine.

Perceptions Of Female Beauty In The 20th Century Perceptions Of Female Beauty In The 20th Century by Louise Wood The 20th century has seen a huge upsurge in the importance placed by Western society on physical beauty, particularly for women. The fashion, cosmetics and plastic surgery industries have thrived on 20th century preoccupation with physical appearance. According to Kant, the judgement of beauty is different from cognitive or moral judgement because it is effected subjectively, that is, exclusively in reference to the person making the judgement. Definitions of beauty in the 20th century, when referring to human physical beauty, are nearly always constructed in terms of outward appearance and sexual attractiveness. For the first two decades of the 20th century, many of the attitudes towards beauty associated with the 19th century remained. One of the main elements of this century's perception of beauty that sets it apart from the 19th century is the polarity of cosmetics. One reason given by Fred E. Academic Writing index

Most Beautiful Women of Ancient Times - Who Are the Most Beautiful Women of Ancient Times Myth, history, and legend provide evidence of ancient women who were considered beautiful, but for most of them, we have no reliable portraits. Beauty is an aesthetic consideration. When judging beauty, it's appropriate to think in terms of the whole personality, but that's not this top beauties list. This one is strictly for physical attractiveness as represented. Here are the women I consider the most beautiful either on the basis of their sexual power over men or their beautiful portraits. 1. Sean Gallup/Getty Images I love to look at the exquisite iconic bust of Nefertiti. 2. Public Domain. Aphrodite, the goddess who won the goddesses' beauty contest that led to the Trojan War should be counted among the all-time world-class beauties. 3. Public Domain. Helen of Troy's face launched a thousand ships. 4. Between the top three and Neaira is a big gap. 5. 6. The seductress Salome's name is associated with the Head of John the Baptist. 7. 8.