The Science Behind How We Learn New Skills 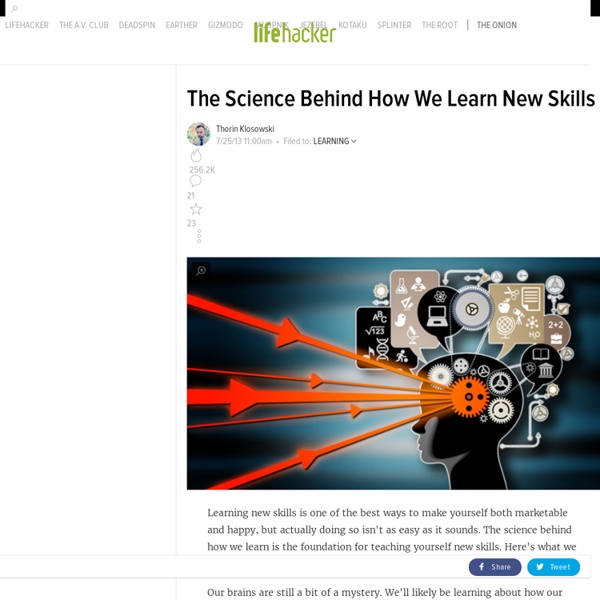 Learn Difficult Concepts with the ADEPT Method After a decade of writing explanations, I’ve simplified the strategy I use to get new concepts to click. Make explanations ADEPT: Use an Analogy, Diagram, Example, Plain-English description, and then a Technical description. Here’s how to teach yourself a difficult idea, or explain one to others. Analogy: What Else Is It Like?

Study: When Human Consumption Slows, Planet Earth Can Heal Despite the oft-repeated claim that the recent decline in U.S. carbon emissions was due to the so-called 'fracking boom,' new research published Tuesday shows that it was the dramatic fall in consumption during the Great Recession that deserves credit for this drop. As nations grapple with the best strategy for decreasing carbon emissions ahead of the upcoming United Nations Framework Convention on Climate Change (UNFCCC) negotiations in Paris, the report, published in the journal Nature Communications, underscores the need for communities to transition away from an economy based on endless growth and towards a more renewable energy system to stem the growing climate crisis. Between 2007 and 2013, the United States—second only to China for the title of world's top polluter—saw carbon emissions fall roughly 11 percent. What the researchers found was that 71 percent of the rise in carbon emissions from 1997 to 2007 was due to "economic growth."

Neuroscience of Music - How Music Enhances Learning - Neuroplasticity Neuroscience research into the neuroscience of music shows that musicians’ brains may be primed to distinguish meaningful sensory information from noise. This ability seems to enhance other cognitive abilities such as learning, language, memory and neuroplasticity of various brain areas. Scientific review of how music training primes nervous system and boosts learning Those ubiquitous wires connecting listeners to you-name-the-sounds from invisible MP3 players, whether of Bach, Miles Davis or, more likely today, Lady Gaga, only hint at music’s effect on the soul throughout the ages. Now a data-driven review by Northwestern University researchers that will be published July 20 in Nature Reviews Neuroscience pulls together converging research from the scientific literature linking musical training to learning that spills over to skills including language, speech, memory, attention and even vocal emotion.

Coursera Machine learning is the science of getting computers to act without being explicitly programmed. In the past decade, machine learning has given us self-driving cars, practical speech recognition, effective web search, and a vastly improved understanding of the human genome. Machine learning is so pervasive today that you probably use it dozens of times a day without knowing it. Beating the Forgetting Curve with Distributed Practice “If you read the research on how much people forget after training, it’s depressing. Do a search for the ‘Forgetting Curve’. Once we know something like this, we need to change our approach and educate others.”- Connie Malamed (The eLearning Coach)The above quote is from our interview with Connie Malamed. After our inspiring and thought-provoking interview with Connie Malamed, we were left wondering about the interesting human nature that is revealed with the ‘forgetting curve’, and its impact on learning design. We set out on a journey to explore and learn more about this phenomenon.Below are the questions we had in mind when we embarked on our journey:

Just because you live in an apartment or a small house with minimal yard space doesn’t mean that you can’t grow your own food. For that matter, you may even be able to have a few animals. Chickens or a goat or two may be a possibility right in your own yard. The important things to growing food for survival in small places are organization and creativity. We’ve gathered some tips that may help! Use Non-GMO, Non-Hybrid Seeds How to Beat the Odds at Judging Risk Most of us have to estimate probabilities every day. Whether as a trader betting on the price of a stock, a lawyer gauging a witness's reliability or a doctor pondering the accuracy of a diagnosis, we spend much of our time—consciously or not—guessing about the future based on incomplete information. Unfortunately, decades of research indicate that humans are not very good at this.

RSA The RSA (Royal Society for the encouragement of Arts, Manufactures and Commerce): an enlightenment organisation committed to finding innovative and creative practical solutions to today’s social challenges. Through its ideas, research and 27,000-strong Fellowship it seeks to harness the extraordinary amount of untapped creative potential in society - by empowering people to be active participants in creating a better world. Overview of the RSA The RSA is a registered charity.

The 27 Principles to Teaching Yourself Anything (aka The Self-Guided Education Manifesto + PDF download “I have never let my schooling interfere with my education.” —Mark Twain Note: This post is intentionally long. It’s meant to be our compass for learning the skills that matter in the world and throwing theory out the window. Read it. Save it. Scientists develop ‘nanopores’ that inexpensively filter the salt out of seawater There’s filtration and then there’s filtration. Engineers in the US have been working on the latter, coming up with a new markedly more energy-efficient way of taking the salt out of seawater, which could deliver huge advantages in terms of providing people with access to drinking water and help combat problems like drought. The researchers have developed a material that allows high volumes of water to pass through extremely tiny holes called ‘nanopores’ while blocking salt and other contaminants. The material they’re using – a nanometre-thick sheet of molybdenum disulphide (MoS2) riddled with these nanopore holes – is the most efficient of a number of thin-film membranes that the engineers modelled, filtering up to 70 percent more water than graphene.

How to Disagree March 2008 The web is turning writing into a conversation. Twenty years ago, writers wrote and readers read. The web lets readers respond, and increasingly they do—in comment threads, on forums, and in their own blog posts.