Making the world a better place, one Evil Mad Scientist at a time. 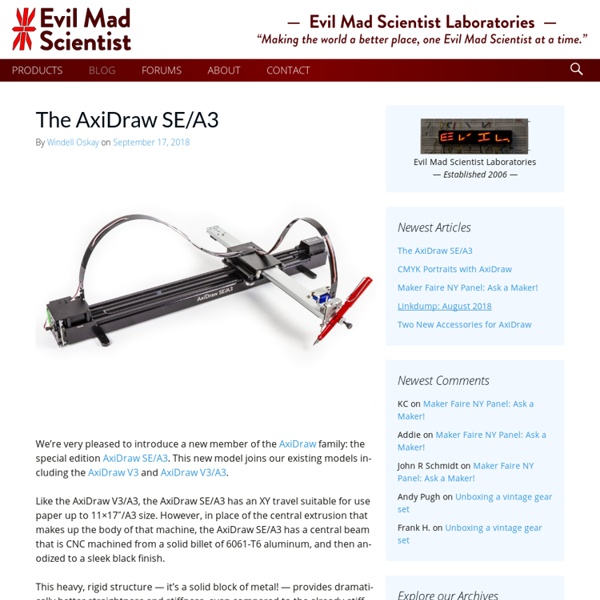 What is Acupressure Massage About Acupressure Acupressure is an ancient Chinese healing method that involves applying pressure to certain meridian points on the body to relieve pain. The human body has fourteen "meridians" that carry energy throughout the body. These meridians start at the fingertips, connect to the brain, and then connect to the organ associated with the specific meridian. Acupuncture and Acupressure use the same points, but acupuncture uses needles, while Acupressure uses the gentle but firm pressure of hands. Do-It-Yourself Decorating Cool Copper Projects Warm metallic hues are easy to love but often pricey. When you create the look...

Tuba HT The most popular drivers for high end Home Theatre subs are long-throw low fs fifteens. But in a reflex or sealed cabinet you just can't get all of their potential from them. Enter the Tuba HT, a big (36x36x24 inch) folded horn specifically designed to get the most out of fifteens. 50 Life Hacks to Simplify your World Life hacks are little ways to make our lives easier. These low-budget tips and trick can help you organize and de-clutter space; prolong and preserve your products; or teach you something (e.g., tie a full Windsor) that you simply did not know before. Most of these came from a great post on tumblr. There is also a great subreddit ‘r/lifehacks‘ with some fantastic tips as well. 20. Separate egg yolks like a boss

How Things Work Posted by admin on Dec 28, 2012 in Entertainment | 27 comments For many thing that we all day see in our lives, we don’t know how some of that things work. Here you can see how things really work. How a Zipper Works 6 Things I Bet You Didn’t Know You Could Do with Google Some of the tips below are effortless to implement and save you a lot of time and energy when dealing with these issues. Let’s start with the first proof of the awesomeness of Google… 1. Don't Go Near The World's Champion Rainbow Watcher. It's Mean. Very Mean : Krulwich Wonders... A few months ago on Radiolab, we did an hour on color, which included a segment on rainbow watching. We imagined a man, a dog, a sparrow and a butterfly all gazing at the same rainbow and we asked: How many colors does each see? Dogs See Bleaker Rainbows We humans see seven. Our dogs, however, see only three.

Mind-Blowingly Perfect Water Simulation Is Now A Reality That kinda shows the sad part of this. Hardware was able to do this for years already, but no game saw need to implement it and focused on other parts of graphics and gameplay. I remember that duck game the PS3 had. Complete water simulation with ducks and sharks. It was a good time waster. About the Aerial Camera That Spotted the Second Boston Bombing Suspect When Dzhokhar Tsarnaev, the younger of the two Boston bombing suspects, was discovered hiding in a man’s boat just outside the perimeter police had set up to search for him, the cops took no chances. Rather than sending officers right in and risking injury, they enlisted the help of an impressive aerial camera to confirm his location and then keep watch as police tried to coax him out. The camera, developed by the FLIR corporation, is called the Star SAFIRE III, and it’s the one behind all of the infrared shots of Tsarnaev in the boat that spread like wildfire all over the Internet this weekend. Here’s one of those pictures: To be accurate, camera isn’t even the right word, FLIR prefers the term “multi-imaging system.” According to Gizmodo, the SAFIRE III is a 15-inch gimbal system that packs a 640 x 480 infrared camera operating between 3-5μm, an optional color zoom camera, a spotter scope, a low-light camera, a 25km laser rangefinder, a pointer, and an illuminator.