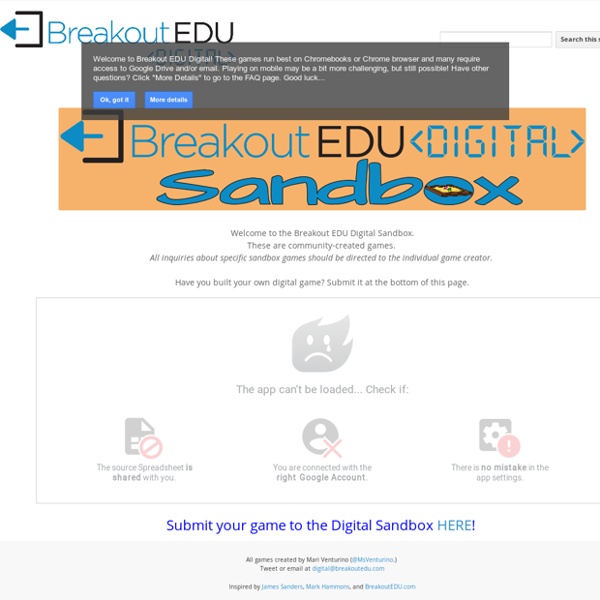 Top Research Websites, Search Engines, and a Research Choice Menu for K-12 Students “Television didn’t transform education. Neither will the internet. But it will be another tool for teachers to use in their effort to reach students in the classroom.” – John Palfrey To learn more about a topic or find the answer students will often Google it!

#BookSnaps with Google Slides – Be REAL #BookSnaps are digital, visual representations of learning that showcase student voice and choice. #BookSnaps can be used at any grade level and for any subject. With that in mind, I would like to introduce a collaborative way to share and curate #BookSnaps using Google Slides. Creating a Digital Breakout for Library Orientation Last year I used Google forms to create my first digital breakout for a lesson on finding copyright free images. I had wanted to blog about it but never had a chance to do so. I decided to start off the new year with another digital breakout for my annual library orientation with 6th and 7th graders. I think that this could easily be adapted for younger or older students. It was a great success and so easy because I did not have to drag out boxes and locks that needed to be set up for each class.

App of the Week: Vibby In this weekly blog, our own Emily Jeanes gives readers the lowdown on web apps that educators can use inside Haiku Learning. Emily is the very first Haiku Learning Sales Engineer. Edtech ninja, sci-fi writer, and proud transfer from our award-winning Client Services team, she brings with her a passion for researching, playing with and integrating awesome educational tools into Haiku Learning. Like Haiku Learning, she likes to think she plays well with others.

The Best Sites To Download Free ESL Board Game Templates I’ve used board games when teaching English Language Learners, and students have particularly enjoyed it when they’ve made their own. When I was cruising the Web recently, just by chance I found that there were sites that had lots of free downloadable templates for ESL games. Many of you probably knew that already, but it was a surprise to me. They could certainly come in handy at times, especially as models for students designing their own.

Bookflix and Chill Earlier this week I stumbled upon a video which was doing the rounds on EduTwitter. A school library, inspired by a number of other schools with Netflix displays, had created a visual for their school library. “Bookflix” had been born. pic.twitter.com/m2FHwm77Ze— Kings Langley School Library (@klslibrary) February 15, 2019 Inspired, I set out to use what I knew about PowerPoint and simple animation to create my own version. It was a little bit popular. The Incredibly True Adventures of an EdTech Trailblazer: Escape The JCHS Library: A Library Orientation Tale A Library Orientation Tale Over Winter Break we rearranged the JCHS Library. I mean....really rearranged the library. The Best Tools and Apps for Flipped Learning Classroom July 25, 2014 Following the posting of "Managing iPad Videos in Schools" somebody emailed me asking about some suggestions for tools and apps to create instructional videos to use in a flipped learning setting. In fact, over the last couple of years I have reviewed several web tools and iPad apps that can be used in flipped classroom but the ones I am featuring below are among the best out there. 1- Educlipper Educlipper is a wonderful tool for creating video tutorials and guides to share with students.

The World Cup craze 2018 FIFA World Cup is just being followed by millions of fans in Russia and of course all over the world. The teams have just finished the (first) knock-out phase and football fans are looking forward to watch the quarter-finals from Friday on. Who will win the final on 15 July? Uruguay? France? Falling for Digital Breakouts The days are cooling down, the leaves are turning beautiful colors, and football season has kicked off. Fall is here, even though the thermometer has hit 98º as I write this. But officially, the calendar does state that fall has arrived. Instead of heading for the goal line or intercepting the football, how about grabbing an apple cider and tackling a digital breakout? The Game Plan (What is a digital breakout?) A digital breakout does not require a physical box and locks.

30 creative ways to use Padlet for teachers and students I’m always excited when I’m using Padlet. Is it the interface, the way everything is designed, its purpose or the fact that I’m organizing things smoothly? I don’t know. It just makes me happy.