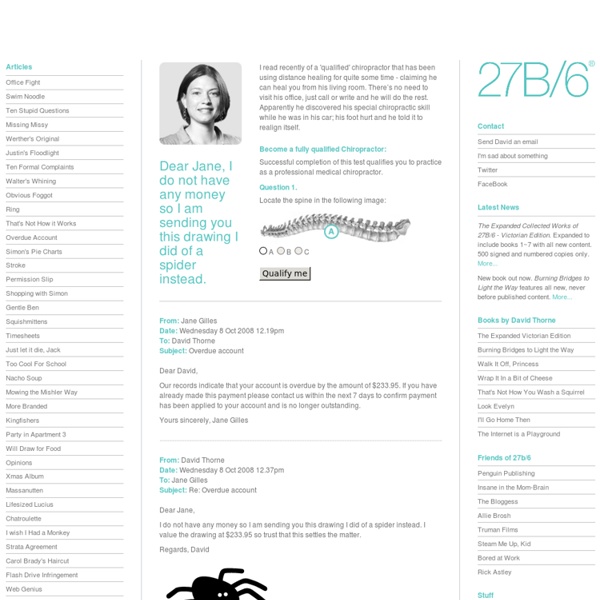 From: Jane GillesDate: Wednesday 8 Oct 2008 12.19pmTo: David ThorneSubject: Overdue account Dear David, Our records indicate that your account is overdue by the amount of $233.95. If you have already made this payment please contact us within the next 7 days to confirm payment has been applied to your account and is no longer outstanding. Yours sincerely, Jane GillesFrom: David ThorneDate: Wednesday 8 Oct 2008 12.37pmTo: Jane GillesSubject: Re: Overdue account Dear Jane, I do not have any money so am sending you this drawing I did of a spider instead. From: Jane GillesDate: Thursday 9 Oct 2008 10.07amTo: David ThorneSubject: Overdue account Dear David, Thank you for contacting us. Dear Jane, Can I have my drawing of a spider back then please. You emailed the drawing to me. Yes please. Attached <spider.gif> From: David ThorneDate: Friday 10 Oct 2008 09.22amTo: Jane GillesSubject: Whose spider is that? Are you sure this drawing of a spider is the one I sent you? Yes it is the same drawing. Related:  trolling

The Most Officialest SkiFree Home Page Microsoft SkiFree 1.0 History In 1991 I was working at Microsoft as a programmer, writing programming utilities for use by other programmers, such as a dialog editor used in the development of Word and Excel. I programmed mostly in C for OS/2 (back then that was a Microsoft product, and supposedly the wave of the future). Deciding it was time to learn Windows programming (Windows 3.0 had just come out) I jumped right in and did a graphical version of my old VAX/VMS skiing game for VT100 terminals. The VAX version had looked something like this: Ski for VAX/VMS The "^" signs are trees, and "//" is the skier turning slightly right. VAX Ski was itself inspired by an Activision game for the Atari 2600 console, which I enjoyed playing in my youth. I wrote SkiFree in C on my home computer, entirely for my own education and entertainment. SkiFree was intended to run on a 386 PC with VGA display. In October 2005 I fixed a few bugs and released version 1.04. Sights and Sounds SkiFree on the Web

Hacked IRL Online disinhibition and the psychology of trolling In everyday life, decorum dictates that certain things just don't happen. Funerals, even for divisive figures tend to go by with solemn respect. Compare this with a recent example of online trolling at its most extreme: In 2011, a Reading man was jailed for raiding the Facebook tribute pages of a 14 year old girl who had committed suicide, filling it with crass jokes and insults. He had never met the girl in question. That's an extreme example, but it's a phenomenon almost as old as the internet itself: trolling. Common wisdom dictates that people are more aggressive, rude and forthright online because they're anonymous and can act as unpleasantly as they like without immediate consequence. Psychologist John Suller wrote a paper on this in 2004, entitled "The Online Disinhibition Effect", where he explored six factors that could combine to change people's behaviour online. Although free speech advocates will wince, communities that are well moderated seem to be more civil places.

Tina Fey teaches Google's Eric Schmidt about comedy Turns out Tina Fey can make even tech nerds funny. During a Q&A with Google's Eric Schmidt, the 30 Rock creator explained the rules of improv and tried to engage the executive chairman in a quick comedic bout…until they "hit a brick wall." "This is the problem with an engineer trying to learn improv," Schmidt said after the bit went south. The pair's attempt at off-the-cuff comedy didn't exactly kill, as can be seen in the video above, but watching a Saturday Night Live alum try to teach one of Silicon Valley's most influential nerds how to be funny has a humour all its own. Fey gave Schmidt the crash course at the Googleplex last week as part of the tech company's Authors@Google series to promote her new book, Bossypants. During the nearly hour-long "fireside chat" (there is no visible fire) Fey -- whose daughter's gangsta walk made her more famous than her mother online earlier this month -- took questions from Google employees and from the internet. Source: Wired.com

Geocaching Geocaching /ˈdʒiːoʊˌkæʃɪŋ/ is an outdoor recreational activity, in which participants use a Global Positioning System (GPS) receiver or mobile device and other navigational techniques to hide and seek containers, called "geocaches" or "caches", anywhere in the world. History[edit] This is where the very first geocache was placed by Dave Ulmer, 360° panorama view Dave Ulmer and the plaque commemorating the first geocache WikiMiniAtlas 45°17.460′N 122°24.800′W﻿ / ﻿45.291000°N 122.413333°W﻿ / 45.291000; -122.413333. The activity was originally referred to as GPS stash hunt or gpsstashing. Over time, a variety of different hide and seek type activities have been created or abandoned, so that "geocaching" now may refer to hiding and seeking containers, or locations or information without containers.[8] Geocaches[edit] A classic geocache -- trade items in a military ammunition box Typical cache "treasures" are not high in monetary value but may hold personal value to the finder. Variations[edit]

People of Walmart: a collection of all the creatures that grace Psychology's answer to trolling and online abuse | Chris Chambers | Science Do we each harbour a dark passenger? A malevolent psychopath? A fragile narcissist? Contrary to popular belief, decades of psychological research shows that anyone is capable of aggression, cruelty and violence. The "self" is a murky mixture of light and shade. Lately the dark side seems to be winning. While most of us agree there is a problem, much less has been said about possible solutions. Psychology may hold a big piece of the puzzle. Suler's basic idea was that by masking their identities, abusers not only avoid accountability for their behaviour but also dissociate their online selves from their real-world selves. Many aspects of Suler's theory remain untested, but a recent Israeli study found that people were less likely to issue online threats under their true identity, suggesting that anonymity is one contributing factor. So what can be done to reshape the cognition of an abuser? Cognitive Behavioural Therapy Cognitive Bias Modification Inhibition Training Empathy Training