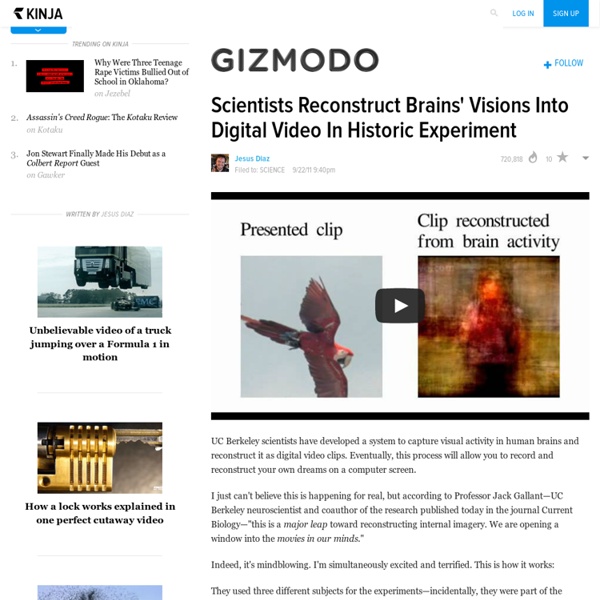 Visions yes. Dreams yes, but not yet. Unless these researchers have already hooked themselves up whilst sleeping, I'm gonna wait on the dream part. My dreams aren't really created visually. They're interpreted that way later. Are we sure the computer isn't mostly analyzing the parts of the brain devoted to processing sight?

5 Mind Blowing Ways Your Memory Plays Tricks On You Everybody will tell you that memory can't be trusted. When they say that, of course, what they mean is other people's memories can't be trusted. We don't like to think that everything we know about the world is based on a deeply flawed and illogical storage system.

Head Room: Six Audiophile Headphones Tested EVERYWHERE YOU GO, it’s so easy to listen to music, thanks to smartphones, tablets, and MP3 players. But it’s kind of a bummer that millions of people now hear most of their music through earbuds with drivers smaller than a dime. It doesn’t have to be this way.

Shepard-Risset Glissando What you’ll be hearing is a fluid audio loop that sounds as thought it is getting lower and lower—like a balloon slowly deflating but never becoming flat. How It Works If you’re anything like HighLab, you too were totally amazed by the Shepard Tone. Our Goods Skip to main content Cart Categories Tips, Tools and Techniques for Marketers Around the Globe Not too long ago, a friend of mine named Ken Robbins who runs Response Mine Interactive told me there are only three things people are interested in paying money for — Love, Weight Loss and Getting Rich. He was simplifying things a bit. After all, Ken’s company sells plenty of things that don’t have to do with love, weight loss or getting rich. Italian Dessert - Tiramisu Recipe The February 2010 Daring Bakers’ challenge was hosted by Aparna of My Diverse Kitchen and Deeba of Passionate About Baking. They chose Tiramisu as the challenge for the month. Their challenge recipe is based on recipes from The Washington Post, Cordon Bleu at Home and Baking Obsession. Having heard so much about Tiramisu, you would think I would have had it like ages ago wouldn't you?

Tips, Tools and Techniques for Marketers Around the Globe In Go Mobile, the book I’ve written with Jeanne Hopkins from HubSpot, we review a list of the 14 most powerful words in marketing so that readers can use them in their mobile marketing campaigns. This post gives you a sneak peak at the list that’s included in the book. Enjoy. Have you ever bought a product that you didn’t really need? You know the kind — they’re often found in the aisle displays at Lowe’s, WalMart or Barnes & Noble. You grab it off the shelf, pay for it, then get home and say, “Why did I just buy something I didn’t really need?”

Homebrewing: How to Make Mead [Photograph: Honey in a jar on Shutterstock] Mid-January has arrived. You are enjoying the first saison of the season and this has your mind on homebrew. What will you brew next? It seems a little too early for pale ales and IPAs but it's too late for stouts. New neurons help us to remember fear Fear burns memories into our brain, and new research by University of California, Berkeley, neuroscientists explains how. Scientists have long known that fear and other highly emotional experiences lead to incredibly strong memories. In a study appearing online today (Tuesday, June 14) in advance of publication in the journal Molecular Psychiatry, UC Berkeley’s Daniela Kaufer and colleagues report a new way for emotions to affect memory: The brain’s emotional center, the amygdala, induces the hippocampus, a relay hub for memory, to generate new neurons. The figure shows newly born nerve cells (green) colocalizing with a neuronal marker which indicates immature nerve cells (red). Astrocytes are labelled in blue.

Royal and noble styles Imperial, royal, and princely styles[edit] Only those classified within the social class of royalty and upper nobility have a style of "Highness" attached before their titles. Reigning bearers of forms of Highness included grand princes, grand dukes, sovereign princes, reigning dukes and princely counts, their families and the agnatic descendants of emperors and kings. Royals (usually emperors to princely counts) are all considered "princes" (German: Fürsten). Emperors and empresses enjoy(ed) the style of His/Her Imperial Majesty (HIM), the only current example is to be found in HIM Emperor Akihito of Japan. Noble styles in France[edit]

Cognitive Dissonance and learning Cognitive dissonance is a psychological phenomenon which refers to the discomfort felt at a discrepancy between what you already know or believe, and new information or interpretation. It therefore occurs when there is a need to accommodate new ideas, and it may be necessary for it to develop so that we become "open" to them. Neighbour (1992) makes the generation of appropriate dissonance into a major feature of tutorial (and other) teaching: he shows how to drive this kind of intellectual wedge between learners' current beliefs and "reality". Beyond this benign if uncomfortable aspect, however, dissonance can go "over the top", leading to two interesting side-effects for learning:

Russian black metal bands list Disclaimer: the list placed below features only those bands who perform black metal as well as related stuff, such as unholy death metal, dark ambient, and so on and so forth. Besides that, as you most probably will notice, I didn't indicate all the recordings these acts might have behind 'em; and the reason is quite simple - I don't have complete info, consequently your help will be much appreciated (in order to enlarge this record). Lastly, please note that the list you’re now going to scroll through, also includes BM bands coming from Belarus and Ukraine. Ten Psychology Studies from 2009 Worth Knowing About - David DiSalvo - Brainspin Image by AFP/Getty Images via Daylife Several great psychology and neuroscience studies were published in 2009. Below I’ve chosen 10 that I think are among the most noteworthy, not just because they’re interesting, but useful as well. 1.