The Beatles Never Broke Up... 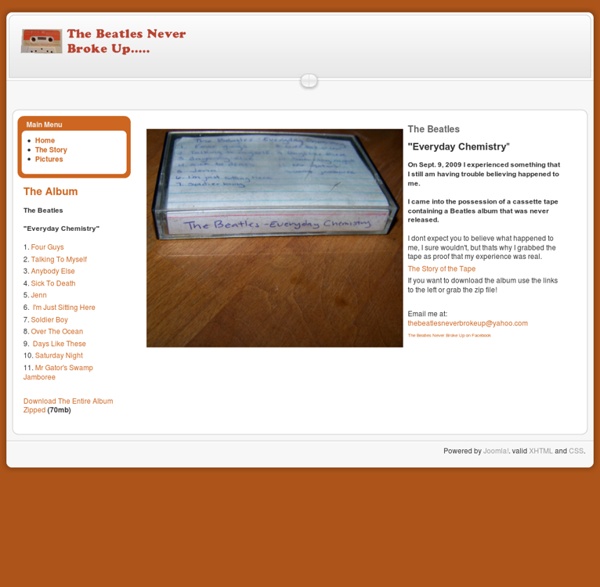 10 Creepy Tales Of Interdimensional Travel Creepy Since its official proposal in 1954 by Hugh Everett III, the idea of parallel universes has boggled the minds of scientists, philosophers, bloggers, and average folk alike. Perhaps we’re just a sliver of time away from an alternate existence, or perhaps regular people we pass on the street are beings from another universe that have already mastered the art of dimensional travel. Quantum physics aside, our only information about these alternate realities comes from the tales of people who claim they found dimensional slips and traveled to unfathomable worlds. 10The Man From Taured On a seemingly normal day in 1954, a seemingly normal man allegedly flew into Tokyo, but upon landing at the Tokyo International Airport, his seemingly normal trip had taken a very drastic turn for the weird. The mystery man claimed his country was located between France and Spain, but when he was asked to point it out on a map, he pointed to the Principality of Andorra. 8Ong’s Hat 7Carol Chase McElheney

Sound - Obscure Records Obscure Records (1975-78) Obscure Records was a U.K. record label which existed from 1975 to 1978. It was created and run by Brian Eno, who also produced the albums (credited as executive producer in one instance). In their original editions, all albums used variations of the same cover art of a collage by John Bonis, covered up by an overprinting of black ink. Brian Eno's album Music for Airports (1978) was intended as the eleventh Obscure album, and has catalogue number OBS-11 written and then scratched out in the matrix area on original UK copies. The first seven albums were issued on the Obscure label in 1975 and 1976, manufactured and distributed in the UK by Island Records whose name appeared at the bottom of the label. Only two of these albums were issued in the USA in the 1970s, on Antilles Records, a division of Island: album 3 as AN-7030, and album 5 as AN-7031. Also in 1978, Ambient 1 was issued. UbuWeb Sound | UbuWeb PennSound | CENTRO | EPC | WFMU

Bermuda Triangle: Ship Reappears 90 Years After Going Missing – World News Daily Report Havana| The Cuban Coast Guard announced this morning, that they had intercepted an unmanned ship heading for the island, which is presumed to be the SS Cotopaxi, a tramp steamer which vanished in December 1925 and has since been connected to the legend of the Bermuda Triangle. The Cuban authorities spotted the ship for the first time on May 16, near a restricted military zone, west of Havana. They made many unsuccessful attempts to communicate with the crew, and finally mobilized three patrol boats to intercept it. When they reached it, they were surprised to find that the ship was actually a nearly 100-year old steamer identified as the Cotopaxi, a name famously associated with the legend of the Bermuda Triangle. An exhaustive search of the ship led to the discovery of the captain’s logbook. Cuban expert, Rodolfo Salvador Cruz, believes that the captain’s logbook is authentic. On 29 November 1925, the SS Cotopaxi departed Charleston, South Carolina, and headed towards Havana, Cuba.

Women's march on Washington: The Top Moments A poem recited by Alicia Keys, a simple request from Scarlett Johansson and a stage showered with shredded newspaper thanks to Michael Moore — these were all moments that caused Women’s March on Washington attendees to explode with loud cheers. Hundreds of thousands of protesters watched speakers and performers’ passionate pleas, speeches and song on Saturday— so many speakers, in fact, that the march was delayed by nearly two hours. But marchers didn’t seem to mind. People surrounded the stage as celebrities, activists and politicians took their turns delivering their unique, inspirational messages. Here’s a look at several moments from the speeches that went viral: Actress America Ferrara’s “We are America” speech: America Ferrara, a vocal Hillary Clinton supporter in the 2016 election, led the charge early Saturday as she stepped on stage to express her hopes and fears, a day after President Donald Trump was sworn in. Activist Gloria Steinem’s message from Berlin: “Are you ready to march?”

Russell Targ - Remote Viewing - Psi - Psychic - Parapsychology Research and Information The Scientific and Spiritual Implications of Psychic Abilities Russell Targ and Jane Katra, Ph.D. Palo Alto, CA 94301 Since ancient times spiritual teachers have described paths and practices that a person could follow to achieve health, happiness, and peace of mind. Introduction What do the spiritual healer, the mystic, and the scientist all have in common? The scientific and spiritual implications of psychic abilities illuminate our observation that we live in a profoundly interconnected world. Psychic abilities and remote viewing are demonstrations of our personal experience with such non-local connection in consciousness. Remote Viewing Stanford Research Institute (SRI) conducted investigations into the human mind's capacity for expanded awareness, also called remote viewing, in which people are able to envision distant places and future events and activities. Here is a CIA artist tracing of a satellite photograph of the Semipalatinsk target site. Distant Healing Dr.

Harvard Goes To The Himalayas – Monks With ‘Superhuman’ Abilities Show Scientists What We Can All Do It’s fascinating to consider just how many ancient teachings tell us that humans have the capacity to gain extraordinary powers through various techniques. Some of these techniques, known as siddhis in the yoga tradition (from the Sanskrit, meaning “perfection”), include meditation, static dancing, drumming, praying, fasting, psychedelics, and more. In Buddhism, for example, the existence of advanced powers is readily acknowledged; in fact, Buddha expected his disciples to be able to attain these abilities, but also to not become distracted by them. A Professor of Buddhist and Tibetan Studies at the University of Michigan, Donald Lopez Jr., describes the many abilities ascribed to Buddha: Again, there are numerous historical anecdotes of people with, as the Institute of Noetic Sciences calls them, ‘extended human capacities.” Since this article is focused on Buddhist monks, here is another example from the lore as written by Swami Rama in Living with the Himalayan Masters: R.C.

Scientists Discover People Who Are Awake Can Influence Dreams Of Sleeping People Using Telepathy Dream telepathy suggests that human beings have the ability to communicate telepathically with another person while they are dreaming. This isn’t a new concept, scientific interest in telepathy dates back to the fathers of the psychoanalytic movement. Freud, for example, looked at the implications of telepathy on psychoanalytic thought. He also considered dream telepathy, or the telepathic influence of thought on dreaming, on multiple occasions. It seems that all great minds encourage the study of various types of non-physical phenomena. “The day science begins to study non-physical phenomena, it will make more progress in one decade than in all the previous centuries of its existence.” – Nikola Tesla According to Stanley Krippner, Ph.D. and professor of psychology at Saybrook University in California: A wealth of anecdotal and clinical material exist which supports the possibility of telepathic effects occurring in dreams (Krippner, 1974). Experiments and Results According to Krippner: 1.

Edgar Cayce Talking About The Arcturians by Arcturi “Arcturus is the highest civilization in our galaxy,” said Edgar Cayce, a prophet who lived between the years of 1877-1945. Further details of Cayce’s life and work are explored in the classic book,There Is a River (1942), by Thomas Sugrue , available in hardback, paperback, or audio book versions. The idea of an alien life form that has been visiting Earth from Arcturus is frequently associated with the writings of Edgar Cayce. Since his early writing of this Race of Aliens, Edgar Cayce has been referred to the father of the Arcturians. Because Arcturian Aliens exist in different dimensions (not just the fifth dimension) it is now known that to communicate with the higher planes of existence, one must enter into a dream state. Today many people have claimed to have communicated with the Arcturians. , which explains the life style and way of life of these benevolent race of Arcturian Aliens. Use Facebook to Comment on this Post Follow In5D and Body, Mind, Soul, & Spirit on TSU!

Stanford Scientists Observe Man Travel Out of His Body and Into Space – What He Saw Was Remarkable NASA’s Pioneer 10 spacecraft was launched into space in 1972. It was the the very first spacecraft to fly directly through the asteroid belt and make observations of the biggest planet in our solar system, Jupiter. It was also able to obtain closeup images of the planet, something that scientists had never had access to before. (1) Prior to the flyby of Jupiter by Pioneer 10, the CIA and NSA, in conjunction with Stanford University, were involved in what was called “Remote Viewing.” Remote viewing can be defined in multiple ways. A gentlemen by the name of Ingo Swann was able to successfully describe and view a ring around Jupiter, a ring that scientists had no idea existed. The successful viewing of the ring by Ingo came after scientists observed him identify physical objects in hidden envelopes that were placed a few hundred kilometers away. It’s remarkable to think about these extended human capacities, and what we are capable of. The Above Information Was Documented. Sources: