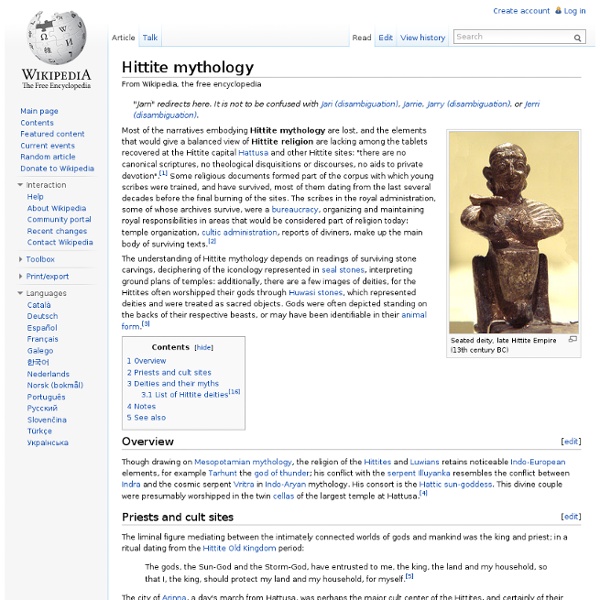 Seated deity, late Hittite Empire (13th century BC) The understanding of Hittite mythology depends on readings of surviving stone carvings, deciphering of the iconology represented in seal stones, interpreting ground plans of temples: additionally, there are a few images of deities, for the Hittites often worshipped their gods through Huwasi stones, which represented deities and were treated as sacred objects. Gods were often depicted standing on the backs of their respective beasts, or may have been identifiable in their animal form.[3] Overview[edit] Priests and cult sites[edit] The liminal figure mediating between the intimately connected worlds of gods and mankind was the king and priest; in a ritual dating from the Hittite Old Kingdom period: The gods, the Sun-God and the Storm-God, have entrusted to me, the king, the land and my household, so that I, the king, should protect my land and my household, for myself.[5] Deities and their myths[edit] List of Hittite deities[15][edit] Related:  Folklore

Finnish paganism The elk is a common image in many Finnish petroglyphs Finnish paganism shows many similarities with the religious practices of neighbouring cultures, such as Germanic, Norse and Baltic paganism. However, it has some distinct differences due to the Uralic and Finnic culture of the region. Finnish paganism provided the inspiration for a contemporary pagan movement Suomenusko (Finnish: Finnish faith), which is an attempt to reconstruct the old religion of the Finns. Deities[edit] The Finnish pagans were polytheistic, believing in a number of different deities. Finnish paganism was based on deities of nature, and it evolved in a time where the Finns were highly dependent on the natural world for survival. Major deities[edit] Several key deities were venerated across nearly all of Finland and Karelia. Haltija[edit] Local animistic deities, known as haltijas, were also worshipped. Maan Haltija[edit] Väki Haltija[edit] Different elements and environments had their own haltijas. Soul[edit] Burial[edit]

Norse religion Norse religion refers to the religious traditions of the Norsemen prior to the Christianization of Scandinavia, specifically during the Viking Age. Norse religion is a subset of Germanic paganism, which was practiced in the lands inhabited by the Germanic tribes across most of Northern and Central Europe. Knowledge of Norse religion is mostly drawn from the results of archaeological field work, etymology and early written materials. Terminology[edit] Mjölnir pendants were worn by Norse pagans during the 9th to 10th centuries. Norse religion was a cultural phenomenon, and — like most pre-literate folk beliefs — the practitioners probably did not have a name for their religion until they came into contact with outsiders or competitors. Sources[edit] Knowledge about Norse religion has been gathered from archaeological discoveries and from literature produced after the Christianization of Scandinavia.[2] Literary sources[edit] Saga[edit] Archaeological sources[edit] Worship[edit] Priests[edit]

Slavic mythology Many generations of Slavic artists were inspired by their national folklore: Ilya Yefimovich Repin, Sadko in the Underwater Kingdom (1876) Slavic mythology is the mythological aspect of the polytheistic religion that was practised by the Slavs before Christianisation. The religion possesses many common traits with other religions descended from the Proto-Indo-European religion. Old Slavic religion evolved over more than a thousand years and some parts of it were from neolithic or possibly even mesolithic times. The Earth was worshipped as Mat Zemlya and there were no temples. Modern wooden statue of Perun, the god of thunder and lightning, Ruthenia Sources of information[edit] Unlike Greek, Indian or Egyptian mythology, there are no first-hand records for the study of Slavic mythology. Written sources[edit] Artistic representation of Saxo Grammaticus Though considered authentic by some Slavic neopagans, the Book of Veles appears to be a forgery from the first half of the twentieth century.

Tengrism "Tengriism" redirects here. For the (unrelated) Japanese religion, see Tenriism. Tengrism (sometimes stylized as Tengriism), occasionally referred to as Tengrianism , is a modern term[1] for a Central Asian religion characterized by features of shamanism, animism, totemism, both polytheism and monotheism,[2][3][4][5] and ancestor worship. Historically, it was the prevailing religion of the Turks, Mongols, and Hungarians, as well as the Xiongnu and the Huns.[6][7] It was the state religion of the six ancient Turkic states: Göktürks Khaganate, Avar Khaganate, Western Turkic Khaganate, Great Bulgaria, Bulgarian Empire and Eastern Tourkia. Khukh and Tengri literally mean "blue" and "sky" in Mongolian and modern Mongolians still pray to "Munkh Khukh Tengri" ("Eternal Blue Sky"). Background A scene from Kırk banyosu (bath of 40) in Turkey. In Tengriism, the meaning of life is seen as living in harmony with the surrounding world. The word Kyrgyz means We are forty in the Kyrgyz language.

Veles (Vles, Volos) Veles has several functions. He is the god of currency, riches and cattle, the deceased and inspiration for creative persons and thinkers. At first sight these functions are not connected in any way, but I’ll try to unite them logically in my story to present the outlook of the pagan Slavs. Let us consider the etimology of the word Veles. he word Veles has evolved during 5 thousand years from words of the Proto Indo-European language. Getting back to the subject of money, in this context it is the agreement to use something as a medium of exchange. To establish such a monetary system, it is necessary to possess wisdom. What is the source of wisdom, knowledge, inuition, and magic talents? Some people identify Veles with the Dragon (snake) who is the enemy of Perun. References:B.

Philosophical Folklore and the Reification Fallacy Among the many things worth studying, one of the most interesting is what I call ‘philosophical folklore’. Folklore, of course, consists of micro-traditions passed down within communities as part of the ordinary ways of life of the people in those communities. We usually think of these micro-traditions as artistic, but much folklore is philosophical in character. Studying this kind of folklore, often fascinating in its own right, can be quite illuminating. Of all subjects in philosophy, I think informal logic tends to provide the richest veins of philosophical folklore. Within the already fruitful field of informal logic, one of the most fruitful for the philosophical folklorist is the theory of informal fallacies. And when we look at supposed examples of reification, we regularly find that there is no substance to the charge of fallacy. Similarly, any list of examples of this alleged fallacy always looks like it was composed by idiots who don’t understand basic figures of speech.

Orpheus & Eurydice vs. Izanami & Izanagi; Inanna vs Dumuzi Parallels | JAPANESE MYTHOLOGY & FOLKLORE Eurydice was the wife of Orpheus, who loved her dearly; on their wedding day, he played joyful songs as his bride danced through the meadow. One day, a satyr saw and pursued Eurydice, who stepped on a venomous snake, dying instantly. Distraught, Orpheus played and sang so mournfully that all the nymphs and gods wept and told him to travel to the Underworld and retrieve her, which he gladly did. After his music softened the hearts of Hades and Persephone, his singing so sweet that even the Erinyes wept, he was allowed to take her back to the world of the living. Many scholars have noted the similarity of key Japanese royal myths to Greek ones, including the renowned British historian, Sir George Bailey Sansom, who, in A Histortory of Japan to 1334 wrote: “This myth of Izanagi’s search for his wife in the Underworld is sometimes compared to Orpheus and Eurydice; but a closer parallel is that of Persephone condemned to remain in Pluto’s kingdom because she had eaten there.

Home | the Folklore Program The Program emerged in the 1980s from the University’s varied foreign language and area studies programs, one of the largest concentrations in the nation. On-going collaborations across campus led to the creation of the Center for the Study of Upper Midwestern Cultures in 2001, a regional humanities institution focused on the languages and folklore of the Upper Midwest’s diverse peoples. Many Program faculty and staff serve on the Center’s Board, and a number—including those connected to the Expressive Culture and Diversity in the Upper Midwest Cluster— teach courses on the Upper Midwestern region’s distinctively plural indigenous and immigrant heritage, hybridity, and contrasts between old and new world traditions.

Keres (mythology) And Nyx (Night) bare hateful Moros (Doom) and black Ker (Violent Death) and Thanatos (Death), and she bare Hypnos (Sleep) and the tribe of Oneiroi (Dreams). And again the goddess murky Nyx, though she lay with none, bare Momos (Blame) and painful Oizys (Misery), and the Hesperides ... Also she bare the Moirai (Fates) and the ruthless avenging Keres (Death-Fates) ... Also deadly Nyx bare Nemesis (Envy) to afflict mortal men, and after her, Apate (Deceit) and Philotes (Friendship) and hateful Geras (Old Age) and hard-hearted Eris (Strife). They were described as dark beings with gnashing teeth and claws and with a thirst for human blood. The black Dooms gnashing their white teeth, grim-eyed, fierce, bloody, terrifying fought over the men who were dying for they were all longing to drink dark blood. As death daimons, they were also associated with Cerberus. Though not mentioned by Hesiod, Achlys may have been included among the Keres.[1]

Ethno Space Khanty people History[edit] Khanty in front of Chum near Lake Numto Khanty man in Tomsk, Siberia Some consider the Khanty's ancestors to be the prehistoric metalworking Andronovo Culture. They are originated from the south Ural steppe and moved into their current location about 500 AD.[1] Khanty probably appear in Russian records under the name Yugra (ca. 11th century), when they had contact with Russian hunters and merchants. The Khanty duchies were partially included in the Siberia Khanate from the 1440s–1570s. In the 11th century, Yugra was actually a term for numerous tribes, each having its own centre and its own chief. Between the 17th and 19th centuries, there were attempts to introduce Christianity, but the Khanty lifestyle did not undergo any real changes. During the Soviet period the Khanty were one of the few indigenous minorities of Siberia to be granted an autonomy in the form of an okrug (autonomous district). Economy[edit] Organisation[edit] Religion[edit] - Il Veltatty Ar (The Lullaby) Iyrcae

The Centre of Cultural History and Folkloristics in Estonia Following the instalment of optical line in the museum, servers Haldjas and Kirmus have been connected to the new server system, and the first subserver has been supplied with FreeBSD. Images of the new server room and technology acquired through LABOR project are available at Overview of data service connected with the project available at The questionnaire and strategy for the pilot project of school lore collection among Russian schoolchildren, planned to early winter 2008, has been accepted. The pilot project will be carried out in five schools, one of these a bilingual Estonian-Russian school. Yuri Fikfak will be working at the Estonian Literary Museum at the invitation of centre of excellence and the Department of Folkloristics for two week. On August 28, 2007, Eda Kalmre and Anu Korb (Siberi eesti kogukonnad folkloristliku uurimisallikana), members of the centre of excellence, will defend their doctoral theses.