Poetry 180 - Do You Have Any Advice For Those of Us Just Starting Out? 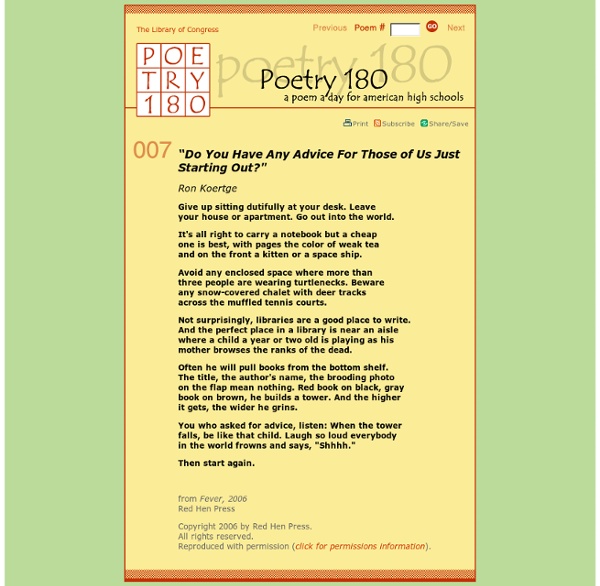 Great Poems & Greatest Books of All Time & Life-Changing Arts A selection of great poems from centuries of brillant authors and poets. Whether you are new to the world of poetry and wish to savor it, or a well-versed poetry connoisseur, either way you will probably enjoy the classics of world poetry. The poems are sorted by vote. To vote for a poem, click on the left of it. Voting is possible once per day. Votes PoemAuthor IfRudyard Kipling EchoChristina Georgina Rossetti If you think the best poem of all times is not even on this list, by all means, let us know which poem it is and why you think it should be added. Get inspired.. inspire others.. Back to Greatest Books of All Time

66 Great Movie Taglines From the Past 30 Years We've combed through the last 30 years of movie marketing and selected our 66 favorite film taglines from that period. The cut-off of 1980 means we've left out what many consider the greatest movie tagline ever—"In space, no one can hear you scream," Alien, 1979—but there's plenty here to chew on. Berate us in comments for everything we left out. Ono no Komachi Very little is known about this Japanese poetess, and most of it is legendary. She lived around 850 C.E. (b. 834?) during the Heian period. The story about her is that she was a woman of unparallelled beauty in her youth and enjoyed the attention of many suitors. She was, however, haughty and cruel, breaking many hearts. What is certain about her, however, is that she was a major poet. I have sometimes commented on certain poems because the variations in translation are bewildering --- often changing the meaning of the original completely. KKS:1030 (Miscellaneous Forms) On such a night as this When no moon lights your way to me, I wake, my passion blazing, My breast a fire raging, exploding flame While within me my heart chars. KKS:113, OHI:9 (Spring) The flowers withered Their color faded away While meaninglessly I spent my days in the world And the long rains were falling. KKS:797 (Love) A thing which fades With no outward sign Is the flower Of the heart of man In this world!

Author quote posters Being around a successful author would surely be exhausting and inspiring in equal amounts. As well as all that wisdom they put into their books, their thought-provoking one-liners would literally be falling out here, there and everywhere. So while you'd beat yourself up for not possessing even a smidgen of that kind of talent, you'd also be maniacally scribbling it all down for dinner party quoting. The rather smart Evan Robertson has created a set of posters that combine iconic author quotes with genius design work. If you don't want at least two of these hanging on your wall then we need to have a serious chat. Tags: books, Design, Posters

Ink - Quotes about writing by writers presented by The Fontayne Group Writing "I put a piece of paper under my pillow, and when I could not sleep I wrote in the dark." Henry David Thoreau "Writing is an adventure." Winston Churchill "Know something, sugar? Stories only happen to people who can tell them." Allan Gurganus "... only he is an emancipated thinker who is not afraid to write foolish things." Anton Chekhov "A poet is someone who stands outside in the rain hoping to be struck by lightening." "Whether or not you write well, write bravely." "The first rule, indeed by itself virtually a sufficient condition for good style, is to have something to say." 25 Great Motivational Quotes You've Never Heard Of inShare66 63Probably my most read post ever was the 20 Greatest Motivational Quotes of All Time. So much so that I expanded the post and wrote a book with the 50 greatest quotes in that is now sent free to my new newsletter subscribers. Sign up in the box on the left if you want a copy. As I was trawling some quotes the other day it struck me how many amazing ones there were that I’d never heard before and I thought it would be cool to collate the best for your perusal. Now of course I realize that you may well have heard of one or two, but I genuinely hadn’t (except one), so please don’t give me a hard time or point out that you knew 18 out of 20 and thus I’m a philistine and deserve a damn good thrashing. 1. Too many people when coming under attack crumble when instead they could view that attack/criticism as a way to grow and mature and come back stronger. 2. You know that, right? 3. This may almost seem anti-motivational, but it really isn’t. 3b. Yes, yes and thrice I say yes. 4. 5. 6.