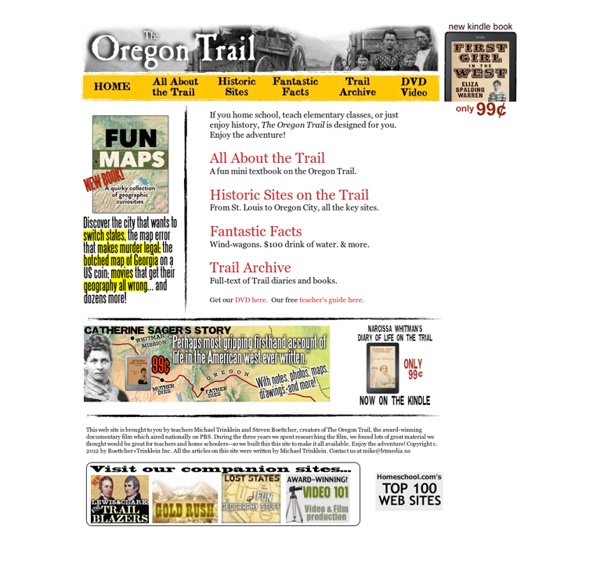 This web site is brought to you by teachers Michael Trinklein and Steven Boettcher, creators of The Oregon Trail, the award-winning documentary film which aired nationally on PBS. During the three years we spent researching the film, we found lots of great material we thought would be great for teachers and home schoolers--so we built this this site to make it all available. Enjoy the adventure! Copyright c. 2012 by Boettcher+Trinklein Inc. All the articles on this site were written by Michael Trinklein.

Oregon Trail History The Oregon Trail byTodd Underwood The Oregon Trail migration, more correctly known as the Oregon-California Trail migration, is one of the most important events in American History. This trail was the only feasible land route for settlers to get to the West Coast. In the early Spring, emigrant campers would infiltrate Independence, Missouri and set up camp, waiting for the grass to grow along the Oregon Trail. Most settlers traveled in farm wagons, four feet by ten feet, with a thousand pounds of food. When the time finally came to leave, the settlers would all try to leave at once creating a massive traffic jam further hindered by the inexperience of some of the green east coast teams. There were many accidents along the way including being run over by the wagons which meant certain death. One common misconception about the travelers journey is that the biggest danger was the Indians or Native Americans. The most notable of the massacres was the Gratten Massacre.

Klondike - Rush for Gold In the summer of 1897 two ocean going steamers landed on the west coast of the United States. One ship, The Excelsior, landed in San Francisco and three days later The Portland landed in Seattle. Down the gangplank of these two ships went a rag-tag group of men and women carrying sacks of gold. Some walked down the docks with $5,000 worth of gold while others had over $100,000 worth. The miners told of the rich claims they had staked one year earlier on a series of small creeks flowing into the Klondike River. This new goldfield, in the northwest corner of Canada, was said to be the richest gold find in all of history with enough work for tens of thousands of people. The Dawson City Museum presents a glimpse of the journey to the harsh north country of Alaska and Yukon.

The Oregon Trail The Oregon Trail Imagine walking for 2,000 miles — barefoot. That is what many children did as they traveled the Oregon Trail in the 1800s. Go to and read All About the Oregon Trail . Now from the left side of the screen, click on "Historic Sites." Go to Fantastic Facts and then click on "Weird Wagons." Extension Activity Complete your journey by taking a field trip with the students at Monroe Middle School. Abraham Lincoln's Crossroads About the Exhibit: Abraham Lincoln’s Crossroads is an educational game based on the traveling exhibition Lincoln: The Constitution & the Civil War, which debuted at the National Constitution Center in June 2005. The online game is intended for advanced middle- and high-school students. It invites them to learn about Lincoln’s leadership by exploring the political choices he made. An animated Lincoln introduces a situation, asks for advice and prompts players to decide the issue for themselves, before learning the actual outcome. At the end of the game, players discover how frequently they predicted Lincoln’s actions.

California Gold Rush History Deer Creek School is located in Nevada City, California. Our community is nestled in the foothills of the Sierra Nevada Mountains at 2,500 feet elevation. Our rural area is known for its beautiful environment and rich California gold rush history. Discover how the historical landmarks of our area weave a tapestry of gold rush history. Take a journey with pioneers who left Independence, Missouri in covered wagons and traveled to Nevada City in l850. Take this journey and learn how the California gold rush of l849 attracted the global community to Nevada County, California--California Gold Country! Nevada County Gold Online Nevada County Schools Nevada City Chamber of Commerce Grass Valley Information In this right-hand column on every page of this site you will find links to additional information related to the subject on the page. Some of those links are within our site, some lead you to other websites.