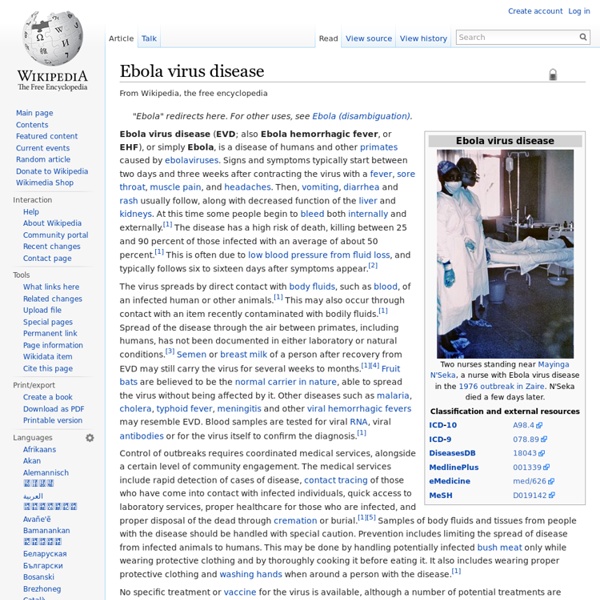 Ebola virus disease (EVD; also Ebola hemorrhagic fever, or EHF), or simply Ebola, is a disease of humans and other primates caused by ebolaviruses. Signs and symptoms typically start between two days and three weeks after contracting the virus with a fever, sore throat, muscle pain, and headaches. Then, vomiting, diarrhea and rash usually follow, along with decreased function of the liver and kidneys. At this time some people begin to bleed both internally and externally.[1] The disease has a high risk of death, killing between 25 and 90 percent of those infected with an average of about 50 percent.[1] This is often due to low blood pressure from fluid loss, and typically follows six to sixteen days after symptoms appear.[2] Control of outbreaks requires coordinated medical services, alongside a certain level of community engagement. No specific treatment or vaccine for the virus is available, although a number of potential treatments are being studied. §Signs and symptoms §Cause Related:  health paradoxically

2014 West Africa Ebola outbreak An ongoing epidemic of the Ebola virus has spread throughout Guinea and beyond the nation's borders in West Africa. At least 500 infections and 337 deaths have been reported.[2] Various organizations, including the US Centers for Disease Control, European Commission, and Economic Community of West African States have donated funds and personnel to help counter the outbreak. This ebola outbreak is the worst ever: the first to affect more than one country and the most severe both in the number of cases and dead. Initial outbreak in Guinea[edit] In February 2014, the first Ebola virus outbreak registered in the region occurred in Guinea. Conakry, Guinea[edit] The outbreak spread to Guinea's capital Conakry,[4] a city of about two million inhabitants, and is a major concern according to Ibrahima Touré, Country Director of Plan Guinea NGO: "The poor living conditions and lack of water and sanitation in most districts of Conakry pose a serious risk that the epidemic escalates into a crisis.

Signs and symptoms David And Jonathan - The Greatest Human Love Story In The Bible. David and Jonathan - a true love story. Did God bless David and Jonathan, a same sex couple in romantic, committed, sexual partnership? The Bible devotes more chapters to their love story than any other human love story in the Bible. What does God intend us to learn from that dramatic emphasis? Donatello's David, in bronze, 1430 The traditional interpretation of the Jonathan and David story has them forming a political covenant and a close, non-sexual friendship. Our powerful 390 page book, Gay Christian 101 - Spiritual Self-Defense For Gay Christians, takes a fresh look at the textual evidence and offers an honest understanding of Jonathan and David, which is faithful to the scriptures. The story of Jonathan and David has long been a favorite of gay people, who easily identify with the challenges these intimate friends faced. Were they lovers? Nongays allege that the Bible strictly forbids all homosexual activity therefore Jonathan and David could not be gay. Three Possible Interpretations

Prognosis Astragalus propinquus Astragalus propinquus (syn. Astragalus membranaceus[2] also known as huáng qí (Chinese: 黄芪), běi qí (Chinese: 北芪) or huáng huā huáng qí (Chinese: 黄花黄耆),[3] is a flowering plant in the family Fabaceae. It is one of the 50 fundamental herbs used in traditional Chinese medicine.[4] It is a perennial plant and it is not listed as being threatened.[1] Use[edit] Herbalism[edit] A. propinquus is used in traditional Chinese medicine for healing and for diabetes.[5] A. propinquus has been asserted to be a tonic that can improve the functioning of the lungs, adrenal glands and the gastrointestinal tract, increase metabolism and sweating, promote healing, and reduce fatigue.[6][medical citation needed] Related species[edit] The natural gum tragacanth, which is used in pharmaceuticals and textiles, is obtained from Astragalus tragacanthus.[7] Medical[edit] A. propinquus is an active component in Lectranal, a food supplement used in treatment of seasonal allergic rhinitis.[8] Chemistry[edit] See also[edit]

Outbreaks Cycloastragenol Cycloastragenol is a molecule isolated from various species of Astragalus that is purported to have telomerase activation activity. A single in vitro study done in 2009 led to claims that cycloastragenol may activate telomerase, leading to controversial claims for its role in reducing the effects of aging.[1] Scientist Hector F. Valenzuela. In late 2013, RevGenetics released their conclusions on TA-65 that showed it is the single molecule Cycloastragenol [2] used in TA-65.[3] More recently, on May 15, 2014 RevGenetics released a press release where they provide new information about a public UK government application where TA Sciences state (among other things) that the active ingredient in TA-65® is Cycloastragenol.[4] Many products that contain cycloastragenol are marketed as health supplements, including HTA98,[7] Stem Cell 100[8] and TA-65MD.[9] Toxicity testing has shown it to be safe for human consumption. TA-65 was mentioned in the BBC documentary, Don't Grow Old.

No, Seriously, How Contagious Is Ebola? Holy moly! There's a case of Ebola in the U.S.! That first reaction was understandable. There's no question the disease is scary. The World Health Organization now estimates that the virus has killed about 70 percent of people infected in West Africa. The Ebola case in Dallas is the first one diagnosed outside Africa, the Centers for Disease Control and Prevention said Tuesday. But when you look at health officials responding to the case in Dallas, they seem cool as cucumbers, despite the initial misstep. "I have no doubt that we will control this importation, or case, of Ebola so that it does not spread widely in this country," said the director of the CDC, Dr. Why is Frieden so sure this virus won't spread beyond a handful of cases? It boils down to something called "R0." The reproduction number, or "R nought," is a mathematical term that tells you how contagious an infectious disease is. Take, for example, measles. At the other end of the spectrum are viruses like HIV and hepatitis C.

Insulin-like growth factor 1 Insulin-like growth factor 1 (IGF-1), also called somatomedin C, is a protein that in humans is encoded by the IGF1 gene.[1][2] IGF-1 has also been referred to as a "sulfation factor"[3] and its effects were termed "nonsuppressible insulin-like activity" (NSILA) in the 1970s. IGF-1 is a hormone similar in molecular structure to insulin. It plays an important role in childhood growth and continues to have anabolic effects in adults. A synthetic analog of IGF-1, mecasermin, is used for the treatment of growth failure.[4] IGF-1 consists of 70 amino acids in a single chain with three intramolecular disulfide bridges. Synthesis and circulation[edit] IGF-1 is produced primarily by the liver as an endocrine hormone as well as in target tissues in a paracrine/autocrine fashion. In rat experiments the amount of IGF-1 mRNA in the liver was positively associated with dietary casein and negatively associated with a protein-free diet.[6] Mechanism of action[edit] Receptors[edit] 3-d model of IGF-1