What we learned from 5 million books 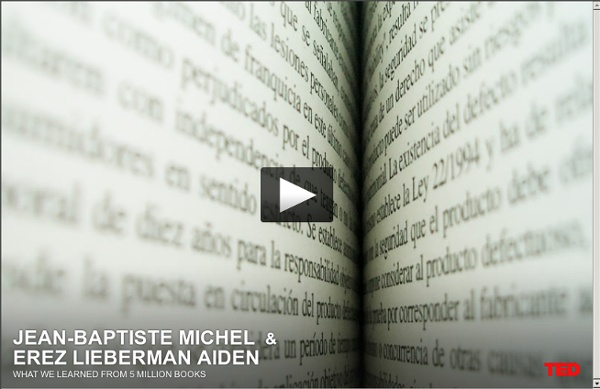 Processing - Please Wait. "An Exceptionally Simple Theory of Everything"[1] is a physics preprint proposing a basis for a unified field theory, very often referred to as "E8 Theory,"[2] which attempts to describe all known fundamental interactions in physics and to stand as a possible theory of everything. The paper was posted to the physics arXiv by Antony Garrett Lisi on November 6, 2007, and was not submitted to a peer-reviewed scientific journal.[3] The title is a pun on the algebra used, the Lie algebra of the largest "simple", "exceptional" Lie group, E8. The theory received accolades from a few physicists[citation needed] amid a flurry of media coverage, but also met with widespread skepticism.[4] Scientific American reported in March 2008 that the theory was being "largely but not entirely ignored" by the mainstream physics community, with a few physicists picking up the work to develop it further.[5] Overview[edit]

English verb Conjugation: modal verbs, irregular verbs, present, future, participle In English, you can type in infinitive forms such as go, abide, break … but also not remember, hurt oneself, come in, go back ... The conjugator recognizes infinitive, reflexive and negative forms as well as phrasal verbs. Who's in Control? - by Jean Liedloff It appears that many parents of toddlers, in their anxiety to be neither negligent nor disrespectful, have gone overboard in what may seem to be the other direction. by Jean Liedloff First appeared in Mothering magazine, Winter 1994

Memetic governance in theory and practice Memetic governance in theory and practice Developing a theory and a replicable method for governance of social systems. Øyvind Vada Elementary Particle Explorer Welcome to the Elementary Particle Explorer, designed by Garrett Lisi and Troy Gardner. Every known elementary particle is identified by its charges with respect to the electromagnetic, weak, strong, and gravitational forces. Electrons have electric charge -1, up quarks 2/3, down quarks -1/3, and neutrinos 0, with antiparticles having opposite electric charges. In the Standard Model, as you are about to see, these electric charges are a combination of the particles' hypercharge, Y, and weak charge, W. The Elementary Particle Explorer (EPE) allows you to rotate in charge space (by dragging the image), showing the charges of all known particles.

17 cultural reasons why this European never wants to live in America Warning: If you are pissed off easily, don’t read this post. Although plenty of (American) commenters agree with me, I’m also getting a flood of angry comments and hatemail, but this is my (as always) frank and honest non-watered-down opinion, take it or leave it! Read on to the conclusion to see my positive thoughts about Americans before you conclude that this is Anti-American propaganda. If you are coming here from Stumbleupon or Facebook, please share this post with your friends if you enjoy it :). You may also enjoy reading my post about the 29 life lessons learned in travelling the world for 8 years straight, and make sure to look around the site for some language learning tips!

Micro Expressions Interesting Info -> Lying Index & Body Language -> Micro Expressions Is the show "Lie to Me" for real? I am not a police interrogator, scientist, or other expert... I am however a mother & people watcher. Years ago, when I wrote articles on How to Detect Lies & Eye Movement and Lying -- I knew of the Micro expression theory, but had a difficult time researching the subject well enough to relay it into an article. Recently, I've come across tons of new research, websites, articles, videos, etc. about micro expressions and believe anyone who reads my old articles about lying & body language would benefit from micro expression research and theory.

Adam Feuer » Blog Archive » Culture Hacking Some culture hackers work on methods that can be shared between teams; others work on the culture for specific companies. Some, like the Core Protocols, are applicable to both. Culture Hacking as a field or discipline is at a level above individual systems. Facebook This article is about the social networking service. For the type of directory, see face book. Facebook (formerly [thefacebook]) is an online social networking service headquartered in Menlo Park, California. Facebook was founded on February 4, 2004, by Mark Zuckerberg with his college roommates and fellow Harvard University students Eduardo Saverin, Andrew McCollum, Dustin Moskovitz and Chris Hughes.[7] The founders had initially limited the website's membership to Harvard students, but later expanded it to colleges in the Boston area, the Ivy League, and Stanford University. It gradually added support for students at various other universities and later to high-school students. Facebook now allows anyone who claims to be at least 13 years old to become a registered user of the website.[8] Its name comes from a colloquialism for the directory given to it by American universities students.[9]

The Complete Guide to Not Giving a Fuck Ok, I have a confession to make. I have spent almost my whole life– 31 years– caring far too much about offending people, worrying if I’m cool enough for them, or asking myself if they are judging me. I can’t take it anymore. It’s stupid, and it’s not good for my well being. The Selfish Gene The Selfish Gene? GeneticsGenes and EnvironmentIntelligence and GenesIQ TestingEugenicsCrime and GeneticsRacism and GeneticsThe Selfish GeneThe Future of GeneticsNotes Part Three It was not until the late 1930s that Darwin’s mechanism for evolution—natural selection—obtained widespread acceptance. At this time, leading scientific figures like Fisher, Haldane, and Wright became the founding fathers of neo-Darwinism, which fused natural selection with Mendelian genetics. The theory of heredity was essential for the connection between the theory of evolution and cell theory. In the 19th century, biologists Schleiden, Schwann, and Virchow explained that cells were the basic unit of all living things.