24 Cognitive Biases stuffing up your thinking 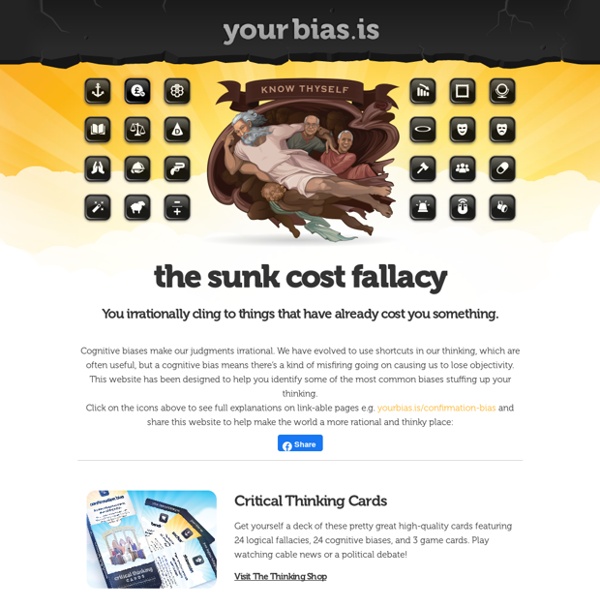 Falsification: How to Destroy Incorrect Ideas Sir Karl Popper wrote that the nature of scientific thought is that we could never be sure of anything. The only way to test the validity of any theory was to prove it wrong, a process he labeled falsification. And it turns out we’re quite bad at falsification. When it comes to testing a theory we don’t instinctively try to find evidence we’re wrong. An Engaging Word Game Helps Students Grasp Implicit Bias As part of an effort to demonstrate the effect of implicit bias, library media specialist Jacquelyn Whiting devised an exercise that looks similar to “Mad Libs,” the popular fill-in-the-blank word game. In EdSurge’s “Everyone Has Invisible Bias. This Lesson Shows Students How to Recognize It,” Whiting describes how she removed words from a New York Times opinion essay to create a new, highly engaging activity for a 10th-grade class. Jacquelyn Whiting Whiting removed key words from the essay to create a paragraph for students to fill-in-the-blank. A student's goal “is to make the paragraph cogent, to choose words that make sense in context,” Whiting writes.

SIFT (The Four Moves) How can students get better at sorting truth from fiction from everything in between? At applying their attention to the things that matter? At amplifying better treatments of issues, and avoiding clickbait? Since 2017, we’ve been teaching students with something called the Four Moves.

Avoiding Falling Victim to The Narrative Fallacy The narrative fallacy leads us to see events as stories, with logical chains of cause and effect. Stories help us make sense of the world. However, if we’re not aware of the narrative fallacy it can lead us to believe we understand the world more than we really do. Fact Finder: Your Foolproof Guide to Media Literacy Are your students savvy searchers? Can they spot the difference between a straight news article and an opinion piece? Do they recognize bias in their sources … or in themselves? Tackle these challenges and more using Fact Finder’s 11 flexible, multimedia lesson plans.

The reality dissection fallacy – ART + marketing Common belief tells us that language carries the meaning in order to communicate. Like a boat would carry merchandise. Wrong. Love doesn’t mean anything. Sky doesn’t mean anything. Meaning doesn’t mean anything. algo_study Big Tech’s Pandemic Power Grab - The Atlantic In the years before the virus, critics began to prophesy that a handful of tech companies would soon grow more powerful than the government. Their scale and influence, and their ability to manipulate public opinion and shape markets, would permit them to reign unimpeded. That warning, however dark, didn’t quite capture the emerging strategy of these firms—a strategy that was in fact taking shape before the pandemic began—or the graver threat they pose. Rather than supplanting government, they have, in essence, sought to merge with it. Facial recognition has always troubled people of color.

Fallacy List 1. FAULTY CAUSE: (post hoc ergo propter hoc) mistakes correlation or association for causation, by assuming that because one thing follows another it was caused by the other. example: A black cat crossed Babbs' path yesterday and, sure enough, she was involved in an automobile accident later that same afternoon. example: The introduction of sex education courses at the high school level has resulted in increased promiscuity among teens. A recent study revealed that the number of reported cases of STDs (sexually transmitted diseases) was significantly higher for high schools that offered courses in sex education than for high schools that did not. 2. SWEEPING GENERALIZATION: (dicto simpliciter) assumes that what is true of the whole will also be true of the part, or that what is true in most instances will be true in all instances.

Analyzing News Sources - Fake News - Library Home at Notre Dame de Namur University confirmation bias: the tendency to believe information is credible if it conforms to the reader’s/viewer’s existing belief system, or not credible if it does not conform content farm or content mill: a company that employs a staff of freelance writers to create content designed to satisfy search engine retrieval algorithms with the goal of attracting views and advertising revenue echo chamber: a situation in which information, ideas, or beliefs are amplified or reinforced by transmission and repetition inside an “enclosed” system, where different or competing views are censored, disallowed, or otherwise underrepresented

Study: Students show ‘troubling’ lack of news literacy skills — News Literacy Project A new report from the Stanford History Education Group has found little change in high school students’ ability to evaluate information online since 2016, when SHEG researchers released the results of a similar study. This skill set — dubbed “civic online reasoning” by Stanford researchers — consists of the ability to recognize advertising, including branded content; to evaluate claims and evidence presented online; and to correctly distinguish between reliable and untrustworthy websites and other sources of information. (The executive summary of the 2016 study summed up “young people’s ability to reason about the information on the Internet” in one word: “bleak” — and the executive summary of the latest report acknowledged that “the results — if they can be summarized in a word — are troubling.”) For the latest findings, SHEG partnered with Gibson Consulting, an education research group, to assess 3,446 high school students from 16 school districts in 14 states.

How Google Creates Alternative Reality COVFEFE – Google deleted this word from its Arabic-English dictionary after President Trump used it in his tweet on May 31, 2017. The original translation of this word (more accurately rendered in English as “cov fe’fe”) was “I will stand up“. Trump used it in a tweet “Despite constant negative press covfefe“, when he came back from Saudi Arabia. Few hours later, he tweeted “Who can figure out the true meaning of “covfefe” ??? Enjoy!” the bullet hole misconception on escaping the present to invent the future this is an extended text version of a talk i gave at voxxed days belgrade in october 2017 and a sequel to my previous talk, the lost medium. feel free to share it and if you have a question, feedback or critique i'd love to hear from you! Good morning.

Getting Beyond the CRAAP Test: A Conversation with Mike Caulfield I have been a fan of Mike Caulfield's work in developing new tools for helping students learn the skills of digital literacy and fact checking for quite some time. I even put an exercise in The Writer's Practice built on Caulfield's "four moves." When I found out he has a new project that is freely available to instructors and highly adaptable to any course, I wanted to do what I can to get the word out. We talked about both the new project in specific and his bigger project in general. - JW