Simon Dale: How I built my hobbit house in Wales for just £3,000 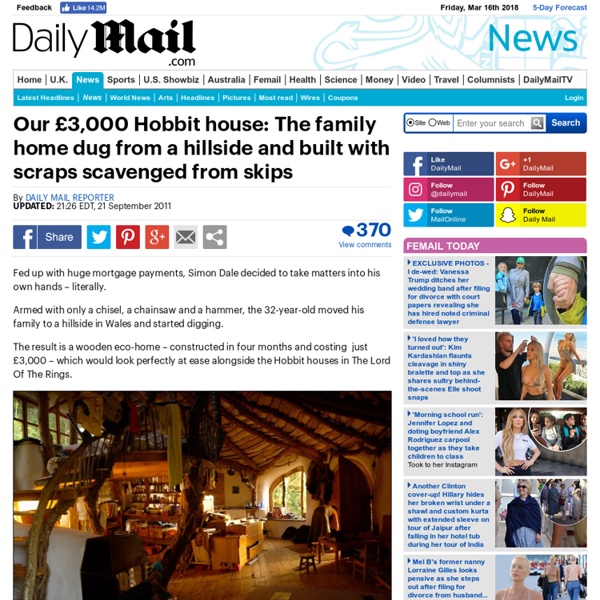 By Daily Mail Reporter Updated: 21:26 EDT, 21 September 2011 Fed up with huge mortgage payments, Simon Dale decided to take matters into his own hands – literally. Armed with only a chisel, a chainsaw and a hammer, the 32-year-old moved his family to a hillside in Wales and started digging. The result is a wooden eco-home – constructed in four months and costing just £3,000 – which would look perfectly at ease alongside the Hobbit houses in The Lord Of The Rings. Finished article: Simon Dale's family home which he built in four months for a cost of £3,000 Nestled: The moon rises on the house which is roofed with grass and blends in to its woodland surroundings Cosy home: The house is heated by a wood burner and a solar panel provides power Mr Dale, who has no experience in carpentry or architecture, created his sustainable family home using scrap wood for floors, materials scavenged from skips and by diverting water from a nearby spring. From scratch: Simon Dale building his 'hobbit house' Related:  Dwelling

Naturally built homes in their winter from Poland to Romania This is a choom in the frozen marshlands of the Yamal Peninsula in northwest Siberia, Russia. The choom, home to the nomadic Nenet, uses reindeer hides wrapped around wooden poles. During periods of migration chooms are moved every other day. Choom sites are chosen based on pasture and ground quality with a water source nearby. After checking the vegetation on a choom site the Brigadier pushes his reindeer driving stick, called a khorei, into the ground where he wants the centre of the choom to be. Reindeer skin has a remarkable capacity to absorb and retain heat. The Nenet reindeer breeders live with the daylight going to bed early, and get up early at about 5am.

California builds first farm-to-table new home community Urban farming is in the air and California is setting an example by creating the first American housing project of its kind with an urban farm built intentionally in the center of the community. The farm will be 7.4 acres and will include a teaching center for sustainable farming. Some 547 new homes have been built around the farm. This is no straw bale hippy paradise, but fulfilling the dreams of mainstream urbanites who want the pleasures of big, single dwelling homes with access to fresh, local, organic produce. The project is called The Cannery, and this Saturday 14 model homes will go on sale. “We have worked extremely hard over the past several years to get to this moment,” said Kevin Carson, Northern California President for NEW HOME. RELATED: flux device uses social connections to advance urban farmers Hear, hear. ::Cannery Website Visit Israel's Agritech and meet flux - for feeding the world on drought flux creates an operating system to power vertical, smart farms everywhere.

Five Eco Villages Around The World Guédé Chantier, Senegal “In the 2000s, we felt our land was dying. We were not getting the yields we were expecting,” says Ousmane Pame, who grew up in Guédé Chantier, a village of 7,000 inhabitants in northern Senegal. In the 1970s Chinese agricultural advisers came to the rice-growing area and taught new methods that involved a lot of chemical fertiliser. But by 2002, the soil was seriously degraded and the villagers decided to take action. Pame had been on an eco village design course in Auroville, India, and told the village chief and the whole community what he had learned; the decision was made to transition to an ecovillage, and Pame was later elected mayor. Now Guede alternates between rice and other crops (tomatoes, onions, corn, okra) and has set up community orchards. The village is also moving to renewable energy, mainly biogas. The government has been very supportive of ecovillages in Senegal. Islas del Rosario, Colombia The Source, Jamaica Hakoritna Farm, Palestine

GEN Global Ecovillage Network Europe: News Detail Ecovillage Boekel is mentioned in a law! The Dutch government has a law to support innovative, sustainable projects by allowing them to experiment outside the rules of our regular laws. Each year a dozen projects are approved for this law. If the experiment is successful, the regular laws are changed. Empowering People Program Ecovillage Boekel has been selected from a list of 220 sustainable projects to receive more support from the Ministry of Infrastructure and Environment. Learning Circle about making the Netherlands more sustainable through ecovillages The first meeting already provided 15 activities that sustainable organizations such as a Dutch bank Triodos, and governmental organizations will carry out.

America’s First Hemp House Pulls CO2 From the Air Hemp is making a major comeback around the world. In the US, five states have legalized the recreational use of cannabis, and hemp-based building materials are now gaining in popularity. The first house built in America with hemcrete was constructed in Asheville, North Carolina, and the 3,400 square foot Push House boasts a number of eco-friendly features. To create a solid – yet breathable – wall system, hemp hurds were mixed with lime and water on-site an poured in-between the exterior supporting studs in lift. As USA Today notes, Hempcrete is actually less like concrete and more like infill straw bale, as it is non-structural. The insulating quality is r-2.5 per inch, and it has the unique ability to capture airborne pollutants over time – absorbing carbon when it is grown and in place. In addition, the material’s high thermal mass helps keep a steady interior temperature, rather than allowing it to fluctuate. images: Push Design Meet the Small Country Betting Big on the Future of Hemp

Low-energy, healthy homes: Europe's answer to shale gas? Prefab Contemporary Log Studio Image: © Thomas Mayer There are not many building styles more traditional than the log cabin, so it is always refreshing to see a new idea take advantage of the humble tree trunk. It’s a bonus when the design boasts efficient prefab construction and contemporary finishes. Commissioned by the entertainer Hans Liberg and designed by Piet Hein Eek, this music studio has a hide-and-seek exterior and bright work-all-day interior. Image: © Thomas Mayer Set on wheels, the studio shares its transportable potential with a certain Mobile Tree House, but aesthetically it is very much aligned with OLGGA’s Portable Log Cabin. Via DigsDigs

Natural Building: Rediscovering the wonder of building with mud As someone who has spent a good deal of time visiting various permaculture/back-to-the-land projects, I've seen a fair number of cob, straw bale and rammed earth homes and buildings. From Ben Law's stunning woodland home to an endangered "hobbit house" in Wales, it seems like buildings created with these techniques are almost always exceptionally beautiful. But I confess that I have sometimes wondered whether natural building would always remain confined to the quirky "hippie" niche, in terms of the mainstream building industry. There are signs, however, that things may be changing. From ultra-efficient (and conventional looking!) So what better time than now to revisit the basics. For your information, this is the same video series from Permaculture Magazine which also brought us segments on vegan organic agriculture, holistic planned grazing, a stunning forest garden, no-dig market gardening and permablitz garden make-overs.

Weaving a home.. how one woman can help millions of people globally A sustainable tent that collects rainwater, folds up for easy transport and stores solar energy? Sounds visionary, right? But this is the invention of Jordanian-Canadian architect, designer and artist Abeer Seikaly. [IMAGE: Abeer Seikaly] Abeer Seikaly designed these amazing multipurpose tents with refugees in mind, people who have been displaced by global and civil war, climate change and more. Inspired by elements of nature such as snake skin and traditional cultural aspects such as weaving, nomadic life and tent dwellings, this weather proof, strong but lightweight and mobile fabric tent gives refugees shelter but also a chance to "weave their lives back together". The flexible dual layer tent structure has the ability to close out the cold of winter and wet weather. Solar energy hits the tent fabric and is stored in a battery for use at night providing renewable electricity. For this amazing life changing structure, Seikaly has won the 2013 Lexus Design Award.

Into the wild: 12 secluded homes and structures built away from civilisation A mysterious cottage isolated from the rest of the world. Photo: Amusing Planet. Every now and then, we all dream of living a peace and quiet life off the grid. Maybe the thought creeps up on us when work is starting to feel like Groundhog Day, or perhaps it's just an ongoing internal longing for some real isolation. On this note, we've gathered some of the most secluded homes and structures in the world, all located off the beaten path, among Mother Nature, and deep into the wild. So take a few minutes and venture away from the cramped crowds and tedious traffic by picturing yourself relocating to these dwellings far, far away from civilisation – even if it's just through the land of your imagination. 1. Advertisement Our first thought when laying eyes on photos of The Crystal Mill; is this place even real? Photos by Lady Lone Ranger 2. ​Located on the island of Vágar in the Faroe Islands, the village of Gásadalur possessing breathtaking views holds a small population of 18. 3. 4. 5. 6. 7.