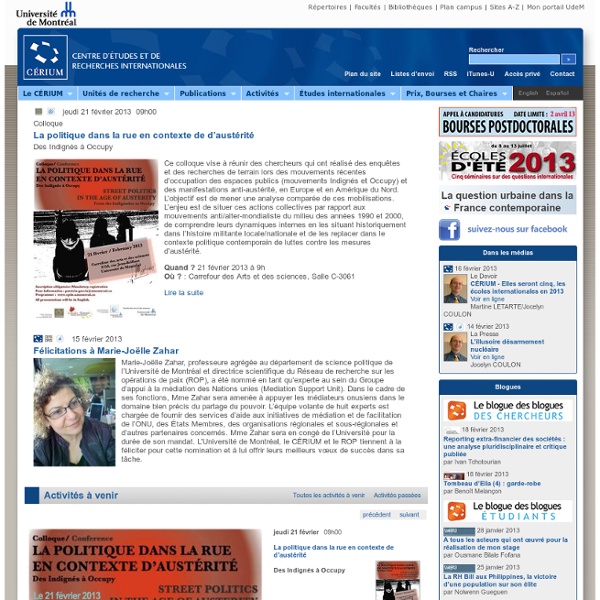 Council on Foreign Relations The Journal of Military Operations – New, Free Online Academic Journal | War and Security The Journal of Military Operations, a new peer-reviewed academic journal, has just published its first issue. It is available online at You have to register, but it is free. Its editor, Dr Jim Storr, states on the Birmingham “On War” blog that it aims to fill a gap for a journal “which focuses on how armed forces do, and should, fight wars.” This is a very promising venture, which fills a gap in the market and is free. It is produced by the IJ Group, which was founded by A. an online, peer-reviewed “journalzine” concerned with strategy as the product of consciously linking ends, ways, and means. You do have to register separately for the two journals, but doing so is quick. Like this: Like Loading...

| Chatham House: Independent thinking on international affairs Peter R Neumann, July 2013 Though widely used by academics and policy-makers in the context of the 'war on terror', the concept of radicalization lacks clarity. This article shows that while radicalization is not a myth, its meaning is ambiguous and the major controversies and debates that have sprung from it are linked to the same inherent ambiguity. The principal conceptual fault-line is between notions of radicalization that emphasize extremist beliefs ('cognitive radicalization') and those that focus on extremist behavior ('behavioural radicalization'). Rather than denying its validity, the article calls on scholars and policy-makers to work harder to understand and embrace a concept which, though ambiguous, is likely to dominate research and policy agendas for years to come.